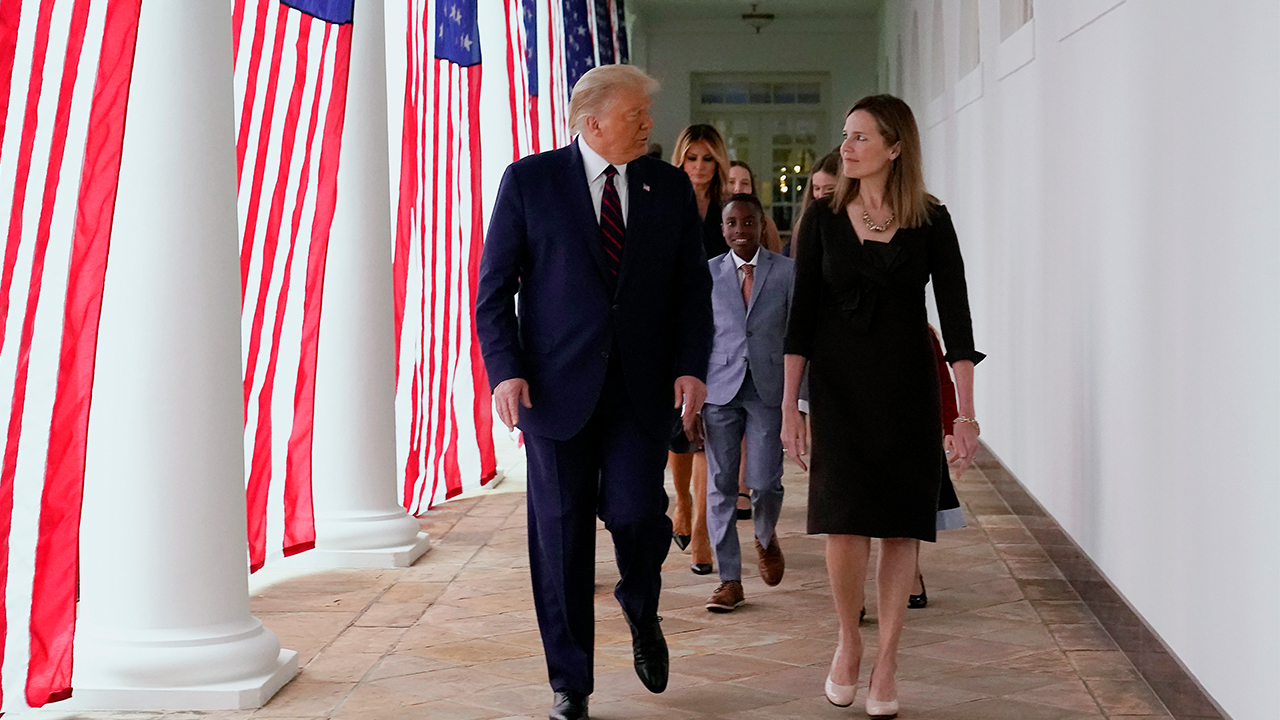 EXCLUSIVE: The White House is mounting an “offensive” communications strategy ahead of Supreme Court nominee Judge Amy Coney Barrett’s upcoming Senate confirmation fight, with aides describing an aggressive plan for “knife fighters” to “fiercely” defend the nominee ahead of what’s expected to be a heated battle on Capitol Hill.

Fox News has learned the White House has formed a team to handle what’s to come in the weeks ahead as Senate Republicans aim to get President Trump’s nominee confirmed to the high court before Election Day.

Senior White House officials told Fox News that the team is broken into two parts: one focused on communications and the other focused on guiding Barrett through the process on Capitol Hill.

Senior officials argued the team is “uniquely equipped” for the mission: The White House communications team will consist of White House Press Secretary Kayleigh McEnany, who is a graduate of Harvard Law School and will take on the role of “lead spokesperson.” Deputy Press Secretary Brian Morgenstern, a graduate of Columbia Law School, and White House communications officials Alyssa Farah and Ben Williamson, who are veterans of Capitol Hill and who have unique relationships with Republican leadership in both chambers of Congress, are also on the team.

The communications team will also include White House staff who will be dedicated to a rapid response effort and research.

“We will need to be knife fighters with the opposition, and will be prepared to marshal information quickly, and disseminate it to push back on any false narratives or attacks on her and her family, because we anticipate, unfortunately, that Democrats will go there,” a senior official told Fox News.

“So we’re mounting an offensive strategy on her behalf because she is such an incredible and inspiring nominee,” the official continued. “We’ll be defending her fiercely every day.”

Another official told Fox News that the communications team intends to be “very well-synced” with Senate communicators, including Majority Leader Mitch McConnell’s office, the Senate Republican conference and the Senate Judiciary Committee.

“We will work closely with them,” the official said.

Senior officials told Fox News that Meadows will be tasked with prepping Barrett and shepherding her through the Senate.

“He knows exactly the senators we’ll need to win over, and the issues that matter to them,” one senior White House official told Fox News. “He knows which senators to target that could bring over votes for her, and will help her to remain independent and speak to her own judicial record to win those key votes. He’s a Capitol Hill strategist.”

As for Cippollone, an official told Fox News that he “knows what she’ll be questioned on.”

“He’ll know ways to navigate those without telegraphing too much to get through the confirmation,” another official told Fox News. “Between Pat’s legal mind and Meadows’ Hill mind, we feel we have the strongest team in place to get through this.”

The official, doubling down, expressed the White House’s confidence in the process, citing experience from both the confirmations of Justice Neil Gorsuch in 2017 and Justice Brett Kavanaugh in 2018.

“Our sense, strategically, is that we know the process,” the official said. “We have muscle memory from being through two confirmations now, we have a White House counsel team who knows what to expect, and we feel highly confident about where we are.”

Republicans, at this point, are eyeing Oct. 12 as the target date for the start of confirmation hearings for Barrett.

“We understand we’re operating on an abbreviated timeline, but we’re embracing that,” an official told Fox News.

The president officially announced Barrett as his pick to fill the vacancy left by late Justice Ruth Bader Ginsburg on Saturday afternoon, touting her commitment to the Constitution and her record.

An Oct. 12 start, 16 days from her official nomination, would be in line with that “abbreviated timeline.”

Senate Democrats are likely to seek to impede the confirmation as much as possible. They have objected to a confirmation so close to the election, citing McConnell’s refusal to consider President Barack Obama’s nominee Merrick Garland in 2016.

McConnell, though, has said that it is a different situation as the White House and the Senate are not held by opposing parties.

Republicans, though, appear to have the votes to move forward and confirm Barrett. Republicans have 53 votes in the Senate and can therefore afford three defections if no Democrat votes for the nominee. In that instance, Vice President Mike Pence would be called in to break a tie.

So far, only Sens. Lisa Murkowski, R-Alaska, and Susan Collins, R-Maine, have indicated they oppose moving forward with a confirmation before the election. Murkowski has since suggested she still may vote for the nominee.

Meanwhile, officials said their main priority in messaging and strategy in the days leading up to Barrett’s confirmation hearing will be “introducing” Barrett to the American people and “allowing them to be familiar with her as a compassionate, working mom from the heartland of America.”