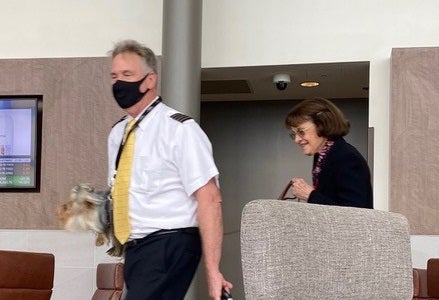 Sen. Dianne Feinstein, D-Calif., was spotted without a mask at Dulles International Airport in Virginia on Friday despite having called in June for the Federal Aviation Administration to adopt “mandatory” mask mandates at airports, on airplanes and on public transportation due to coronavirus.

The photos, obtained by “Tucker Carlson Tonight,” show Feinstein on Friday near a man wearing a face mask while walking through Dulles Signature, a terminal at the airport for passengers flying private.

A traveler who was waiting at Dulles Signature at the same time as Feinstein said he was told he had to wear a mask.

Feinstein wrote to the FAA to urge them to “issue clear, nationwide, mandatory mask requirements for all aviation employees and travelers” in late June.

“I ask that you issue guidance as soon as possible so passengers can have a clear understanding of the requirements and so that we may reduce exposure for workers and travelers alike,” she wrote at the time.

Tucker Carlson Tonight’s inquiries to Feinstein’s office were not returned at the time of publication.