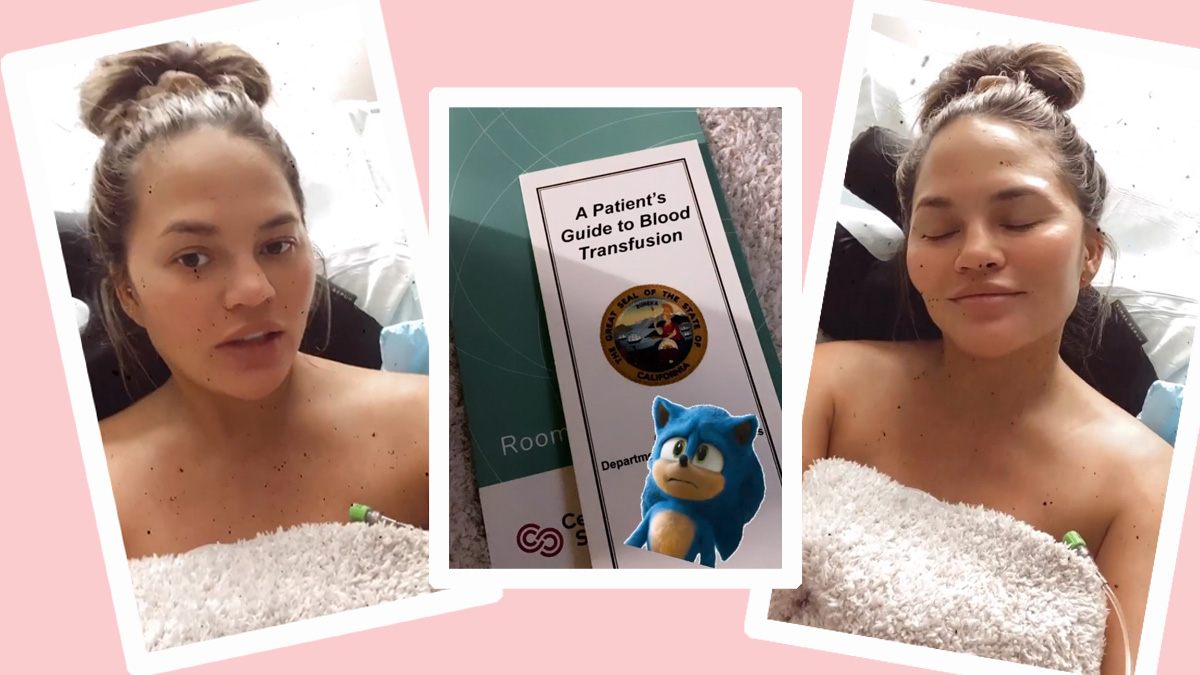 Chrissy Teigen‘s third pregnancy is taking everything out of her, and then some!

On Monday, the Cravings author took to social media and shared another update with fans, revealing she underwent multiple blood transfusions amid her recent hospitalization. As you’re likely aware, Chrissy’s journey to baby number three with husband John Legend has been quite challenging due to chronic complications like excessive bleeding and despite a mandatory bed rest period to strengthen her body, she was forced to seek greater medical care over the weekend.

Teigen told her followers in an Instagram Story video:

“I got some blood from somebody. So if you donate blood, it goes to actual people, people that might be me. I kind of feel like I definitely have somebody else inside me right now, which is an odd feeling to have.”

She continued opening about the procedures, adding:

“I had my first blood transfusion which sounds so much more dramatic than it is. It’s just like an IV except not fluids, it’s human blood.”

Dramatic? Gurl, that still doesn’t sound like fun at ALL! We’re glad to hear the Bring The Funny star is keeping such a good sense of humor about everything, though. In the following clip, she took a jab at right-wing nutjobs and joked:

“There’s so many people out there who would be so mad if they got my blood. Like some hardcore MAGA person would be like, ‘Ew, this is Chrissy’s blood. Nooooo!’”

LOLz! Well, those people could probably use the blood of a sane person who actually values democracy, human rights, and common sense running through their veins. Just saying! After the medical update, Chrissy kept the funny vibes going on her feed by sharing a hilarious throwback photo of herself looking annoyed this past New Year’s Eve. She wrote:

“Hello from hospital. about to have my second blood transfusion which truly truly truly sounds more dramatic than it is. It’s an IV, but instead of fluids, the blood of some kind human being out there. Baby and I are completely fine, just missing the little things like walking…cooking…playing with the other buttbutts. came across this little gem from ringing in 2020. It all makes sense now!”

OMG, this is such a mood! If you’re looking to describe 2020 in one facial expression, well, you’ve found it.

Again, it’s nice to hear the cooking enthusiast is taking this difficult pregnancy in stride. As we mentioned earlier, she was hospitalized on Sunday night after the bleeding she’s experienced throughout her pregnancy became constant. Luna and Miles‘ mom attributed this issue to her “super weak” placenta, which isn’t giving her baby boy the nutrients he needs.

Although she previously explained “there’s not much you can do” right now based on how far along the baby is, doctors, unfortunately, had to intervene on Tuesday morning when the expectant model suffered a “huge clot,” which nearly endangered her unborn son.

Just had a really scary morning ???? huge clot, almost save-worthy. The scramble to hear the heartbeat seemed like hours. I never thought I’d relief sigh so much in my liiiiife

Wow. How scary!! We are so relieved to hear this scare didn’t take fully take a turn for the worse. Sending her lots of love and strength through the second half and home stretch of this pregnancy!