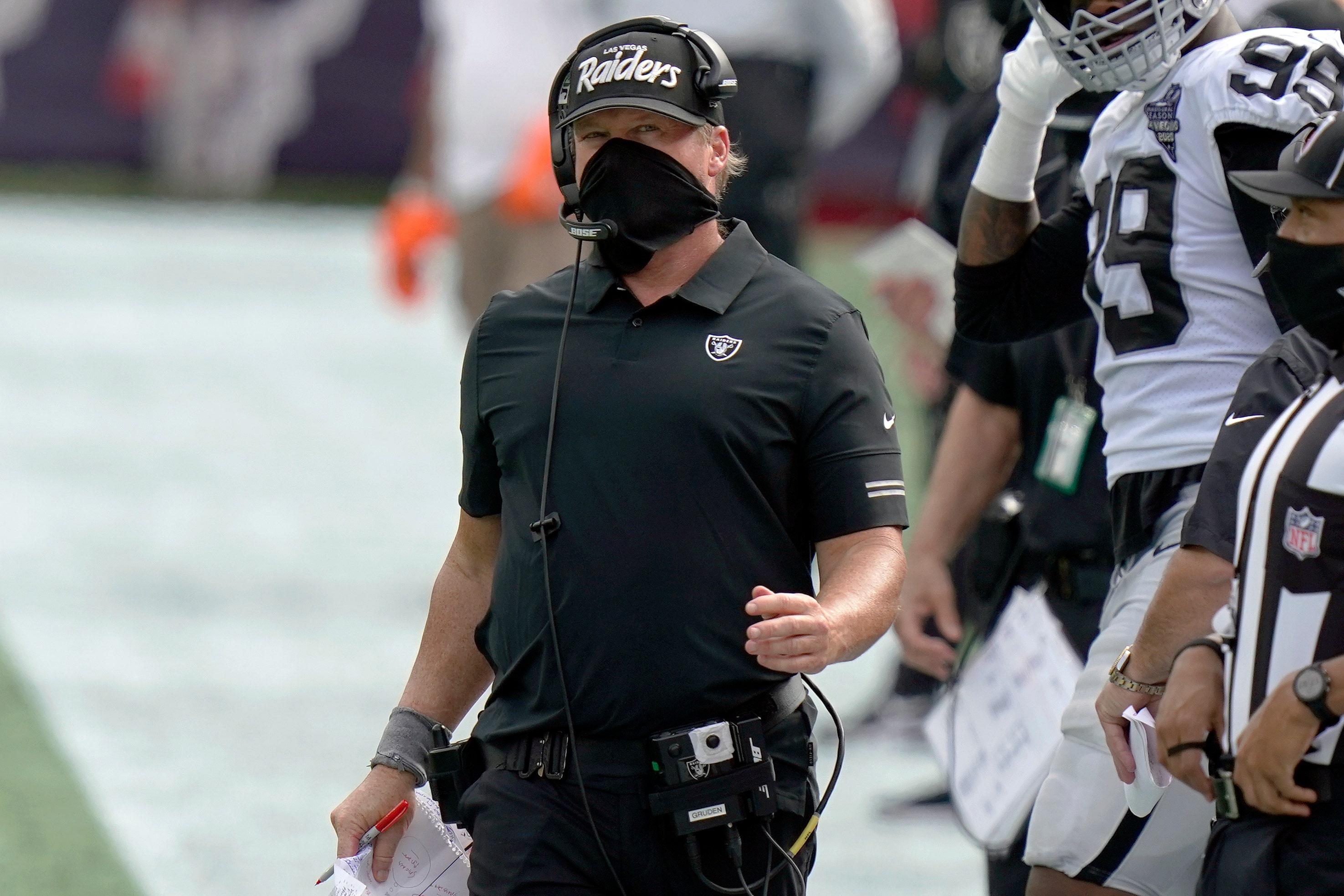 Las Vegas Raiders coach Jon Gruden said several of his players made a mistake when they didn’t wear masks or practice social distancing during a charity event that violated league and local COVID-19 rules.

Players were seen on video without masks during the indoor event while talking and mingling with guests, who also weren’t wearing masks.

“We’ve done a good job, done an excellent job,” Gruden said Wednesday. “Last night, it was addressed with our players. They walked in with their masks on. Sometimes you go to a restaurant and take your mask off. They’re aware of their mistake. But we’ve done an excellent job of using our manners, taking proper care of each other.”

This is the latest possible infraction of the COVID-19 protocols by the Raiders early this season. A person familiar with the punishments said Gruden was fined $100,000 and the team fined $250,000 because he failed to wear his mask properly on the sideline during a Week 2 game against the New Orleans Saints. The person spoke on condition of anonymity because the league hadn’t made any announcement.

The team is also being investigated for allowing an unauthorized team employee into the locker room after the Saints game.

“I feel like one, we’ve done a fantastic job around here,” Carr said. “I hate that a few moments without our masks on led to a story about our team and all this kind of stuff, especially after the fines that were brought on a couple weeks ago. We felt terrible about that. We addressed it. We talked with coach and we talked with our trainers about what really went down and all that kind of stuff.”

The city of Henderson fined the DragonRidge Country Club $2,000 on Tuesday for four violations of the Nevada governor’s COVID-19 emergency directives, including people not wearing masks and more than 50 people at the event. The club has 30 days to pay the fine or dispute it.

Rules from the NFL and NFLPA limit what players are allowed to do away from team facilities this season to try to help prevent the spread of the coronavirus. Players are banned from attending any event that “violates local and state restrictions.”

The NFL said it is looking into the events from Monday night, which came hours before the Tennessee Titans and Minnesota Vikings had to suspend in-person activities because three Titans players and five personnel tested positive for the coronavirus following a game between the teams Sunday.

Gruden revealed a few weeks ago that he had the coronavirus in the offseason.

“We all understand that this is a terrible, terrible virus and we have to do our part,” he said. “We’re all vulnerable. Unfortunately, it sounds like a few people got the virus. I just wish the best for everybody in Tennessee. It does certainly get yourself awakened to the reality that it can hit anybody, anywhere at any time.”

Carr declined to answer any questions about the event but said he hopes it doesn’t overshadow the good that came from the fundraiser that Gruden said brought in $300,000 for Waller’s cause.

“We weren’t perfect, but we were trying our best,” Carr said. “We weren’t trying to be careless or reckless. But at the same time, Darren Waller had an event for something that meant a lot to him and they raised so much money that you won’t even begin to imagine how much money they raised to help other people that struggle with addiction, to get them in the right places and things like that.”