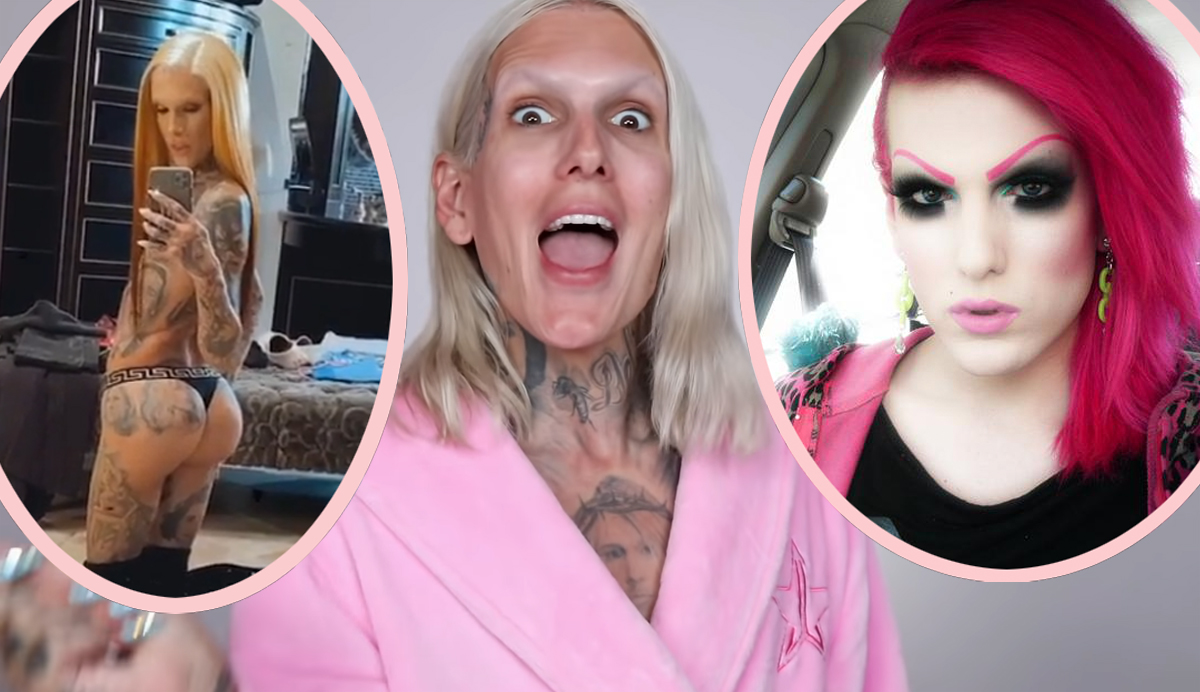 The popular YouTube beauty guru and makeup mogul has no shortage of past controversies that periodically continue to pop up thanks to nothing ever disappearing on the internet.

This one may be next level, though, as Insider reporter Kat Tenbarge just published a bombshell investigative piece on Thursday morning documenting allegations of sexual assault, sexual violence, and more against the viral video star.

Related: Jeffree Star Accuses His New Boyfriend Of Robbing Him!

In the 3,000-word piece, Tenbarge speaks with multiple people, including “Star’s former friends, peers, and associates,” who all recount accusations of past racist outbursts, shocking and inappropriate sexual behavior, the use of a stun gun tasing device on unsuspecting accusers, and even physical and sexual abuse against others that Star allegedly committed years ago, at the hight of his Myspace fame.

OK, the racism is pretty well documented at this point — and frankly has never been addressed sufficiently as far as we’re concerned. But these new (old) allegations are still pretty shocking.

Star’s attorney has already spoken out against the allegations in the Insider report, calling them “false and defamatory” — specifically denying the accusations of physical and sexual violence.

Nevertheless, Insider obtained messages seeming to indicate at least two of the men who came forward previously discussed a $10,000 payout offer from Star to recant their allegations. Whoa…

Now 34 years old and one of YouTube’s biggest celebrities, Jeffree Star got his start as an electropop musician and “scene fixture” during the internet’s Myspace era in the late 2000s, even performing on the Warped Tour concert series at one point. Zach Neil, a longtime former stage manager for the tour, was one of the people who came forward regarding Star’s alleged behavior, telling Insider (below):

“I’ve seen him grope both guys and girls. I think anybody that has seen him in concert has seen that. That’s just part of his thing, feeling people up and groping people and ass slapping and d**k grabbing.”

Uh… that’s quite the ‘thing,’ but OK… We mean, we can’t say our jaws are dropped by those allegations.

Four other people ultimately corroborated to Insider that Star groped men around him without consent. But those sexual assaults were just the tip of the iceberg — because the behavior was allegedly enhanced with violent battery as well. And by battery we mean the volts powering a stun gun. Five separate individuals alleged that they personally saw Star use a “close range stun gun or other tasing device” to hurt and intimidate people around him, including to coerce oral sex from otherwise non-consenting men.

OK, wait, what?! The groping was crossing a line, but this sounds downright felonious!

Describing one particular incident, five people told the outlet that they saw Star use the taser on a then-homeless teen in 2009 when he rejected the celeb’s affections in a movie theater. According to the witnesses, Star followed up the shock by invited the man, identified as Gage Arthur, to stay in his apartment that evening, gave him Ambien until he was intoxicated, and then “forcibly performed oral sex on him without his consent.”

This is not the first time Arthur has come forward with this claim, either; he made similar accusations for the first time back in August, when he worked with a separate blogger to publish a piece accusing Star of having “drugged, tazed, and raped” him when he was just 17 years old. This new report is even more researched with more corroboration.

As Insider reports, text messages obtained from other parties seem to suggest that a pay-off was discussed if the man were to recant the allegations. In these messages Arthur, apparently writing to another accuser coming forward, confirms he has changed his public account of what happened to him, telling the other accuser there is a deal to be made:

This other accuser didn’t want the hush money and gave the outlet access to the messages.

But money can’t cover the truth; several people have already corroborated parts of Arthur’s original story to Insider. In addition to the accounts of the incident which have been floating around social media for a decade, the outlet got “several on-the-record interviews with friends and witnesses” who had the same story to tell.

Arthur’s former roommate was one of these witnesses. He confirmed Star visited their apartment and even verified footage of the three of them together. The Stickam video includes Star kissing Arthur for several seconds. Arthur would have been 17 at the time, with Star around 22.

Not only that, but even Neil, the former Warped Tour manager, recalls how Star allegedly repeatedly used his stun gun on unsuspecting and undeserving victims during one particular tour in the late 2000s. In fact, he knows where the stun gun came from!

“He came around a friend of mine and myself one morning on Warped Tour and he was super stressed out. He said people were gay-bashing him on the tour. My buddy gave him a stun gun and said, ‘Listen, if anybody really tries to beat you up, you can use this and you can defend yourself.’”

But it wasn’t used for self defense. Neil continues:

“And then we got called into production’s office by the owner of the tour the next day […] apparently, [Star] was going around stunning everyone.”

Did he get drunk on just 12 volts of power? Or did he ever plan on using the weapon for defense at all??

Another man, Kris Whalen, who was Arthur’s roommate at one point in the late 2000s, further recalls how Jeffree manipulated Gage with the stun gun during an alleged incident of sexual assault:

“Once they were all messed up [on Ambien], Jeffree had gotten flirtatious and tried fooling around with him. Gage was kind of standoffish because, to my knowledge, he’s straight. Jeffree had pulled out a taser and, to be blunt, said ‘You’re going to let me suck your d**k or I’m going to tase you.’ … [Gage] told me, he didn’t go into details, but said that out of fear he let it happen.”

In another reported incident from 2007, Star was set to perform at a pizzeria in Anchorage, Alaska when he allegedly groped a man named Britain Strah minutes after meeting him. According to Strah, who remembers wearing Spandex shorts on that particular night, Star “reached down and groped his genitals” immediately after being introduced to then-18-year-old victim:

“I was just kind of shocked. After a while it dawned on me that it was pretty f**ked up. When the ‘Me Too’ stuff started happening, all these things that seemed to be smaller transgressions were coming out, and I was like ‘Whoa, wait a second, I was assaulted.’ It had never really clicked.”

Strah’s longtime best friend Scott Thorpe also happened to be working at the pizzeria that night, and recalls how it took a while to dawn on them about just how serious a situation it was:

“Brit expressed that happened and I remember thinking that was part of the energy at the show. I remember people getting groped onstage during that show in a way that I thought was just, ‘Well, this is the way these kinds of things are.’ I’m at a different place now and understand what’s a consensual touch.”

And for victims like Strah, having Star become such an iconic viral figure via YouTube over the past few years has been difficult, to say the least.

Strah, who is a member of the drag community, told Insider:

“Since he’s created his makeup brand and gotten big on YouTube, especially with the community I’m in, I see his face everywhere. You can imagine that’s very unpleasant. To have all these companies try to sell you your abuser is very uncomfortable.”

For Neil, Star’s bad behavior quickly made him persona non grata on the Warped Tour, burning that bridge years before the embattled celeb re-invented himself as a YouTube superstar.

The former tour manager recalled Star would routinely “grope both guys and girls on stage,” describing it as one of the now-34-year-old’s “shticks” even among his young-looking and underage fans.

“[He’d do] things like three-way kissing and feeling each other up. It was the reason we never booked him again. We used to book him at various venues in the Northeast and someone who worked with me used to book him at tours and shows. Once I became aware of that behavior, that was it. I didn’t want anything to do with him.”

Now, it seems, more people are coming to a similar conclusion.

You can read the whole Insider piece and the rest of its investigation into Star’s alleged past behavior and alleged attempts at buying the silence of his reported victims HERE.

Reactions, Perezcious readers? Sound OFF about it down in the comments (below)…