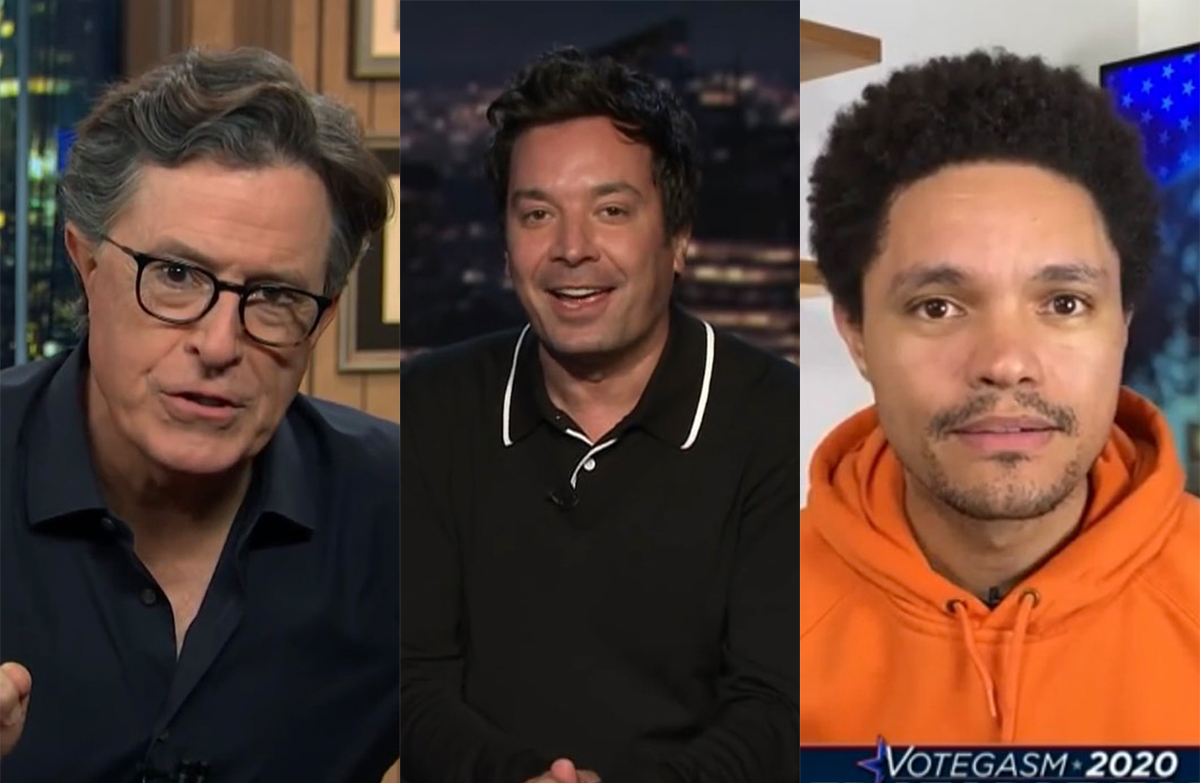 Tuesday night’s debate might have seemed more like a disaster film than a comedy, but the late night hosts still gave it their best shot anyway.

As Stephen Colbert aptly put it, “You’ve gotta find your happiness where you can.” Man, if that isn’t good advice for 2020 on the whole…

Much like the rest of us, the funny men of late night were in disbelief over the mess that was the first presidential debate between President Donald Trump and former Vice President Joe Biden. Still, they managed to poke fun at some of the most egregious moments of the night. (We imagine it was hard to choose just a few for a monologue.)

Moderator Chris Wallace, whom Colbert called a “hollow husk,” was an easy target. Jimmy Kimmel joked that Trump treated the Fox News personality “like he was Eric asking for more allowance money,” while Jimmy Fallon quipped:

“Before the debate, Chris Wallace said that if he does his job right, it’ll be like he’s not there. Well, mission accomplished.”

“Chris Wallace, thank you for your service and I hope that you have a lot of money for your therapy. You made a valiant effort, but you were not ready for this because no human being could’ve been ready for this. They don’t need a moderator for this thing, they need a UFC ref. Dana White, get on it!”

He wasn’t the only one who compared the cross-talk and low blows to a bloody sporting event. Kimmel called the debate a “Wrestlemania” match of “Sleazy vs. Sleepy,” while Colbert opened his show with a rousing: “Get ready for democracy to CRUUUUMBLE!”

A highlight of the evening was when a frustrated Biden told the president to “shut up,” a moment that delighted some late night hosts. Fallon teased that “After that, Biden got a standing ovation from Melania,” while Colbert laughed:

“Imagine if that worked! It’s not great when you have to say the same thing to the President of the United States that you would shout at a friend who won’t stop ranting about how Van Halen was actually a better band with Sammy Hagar.”

Ch-ch-check out the clips (below) for more of the best jokes:

The Tonight Show With Jimmy Fallon

Fallon spoke for all of us when he opened with:

“Man what the hell was that? Was that a debate? I am so… what was it? I am so stressed right now. I have a kink [in my back]. It felt like I just slept on an air mattress. … Seriously did anyone take anything away from tonight? Was that helpful to any American? The only person who enjoyed that was Vladimir Putin while he was stroking a cat. Sitting through that debate felt like getting a COVID test in both nostrils at once.”

The Late Show With Stephen Colbert

The former Colbert Report host went unsurprisingly literary with his lofty assessment of the debate. He waxed poetic:

“I come to you tonight, ladies and gentlemen, an empty vessel. A man with a mind wiped clean. … Yes, tonight saw the best minds of our generation destroyed by madness, starving, hysterical, naked, dragging themselves through the streets at dawn, looking for the mute button.”

“They flipped a coin to determine who would get the first question, but when Trump saw the quarter in the air he said, ‘Hey, that’s how much I paid in taxes last year,’ and it went downhill from there. … It was a terrible debate. I’d call it a nightmare, but at least during a nightmare you get some sleep.”

The Daily Show With Trevor Noah

“Trump would not shut up. … Right now, he’s still in his bedroom complaining about how ‘Crooked Hillary‘ rigged the election that he won. … Trump did more interrupting than Kanye West in a room full of Taylor Swifts.”

Seth Meyers may have missed the debate, but he’s still one of the best when it comes to political comedy. And as he put it:

“We tape early so I’m not sure what happened, but I know even if we didn’t, I’m sure I’d still feel that way.”