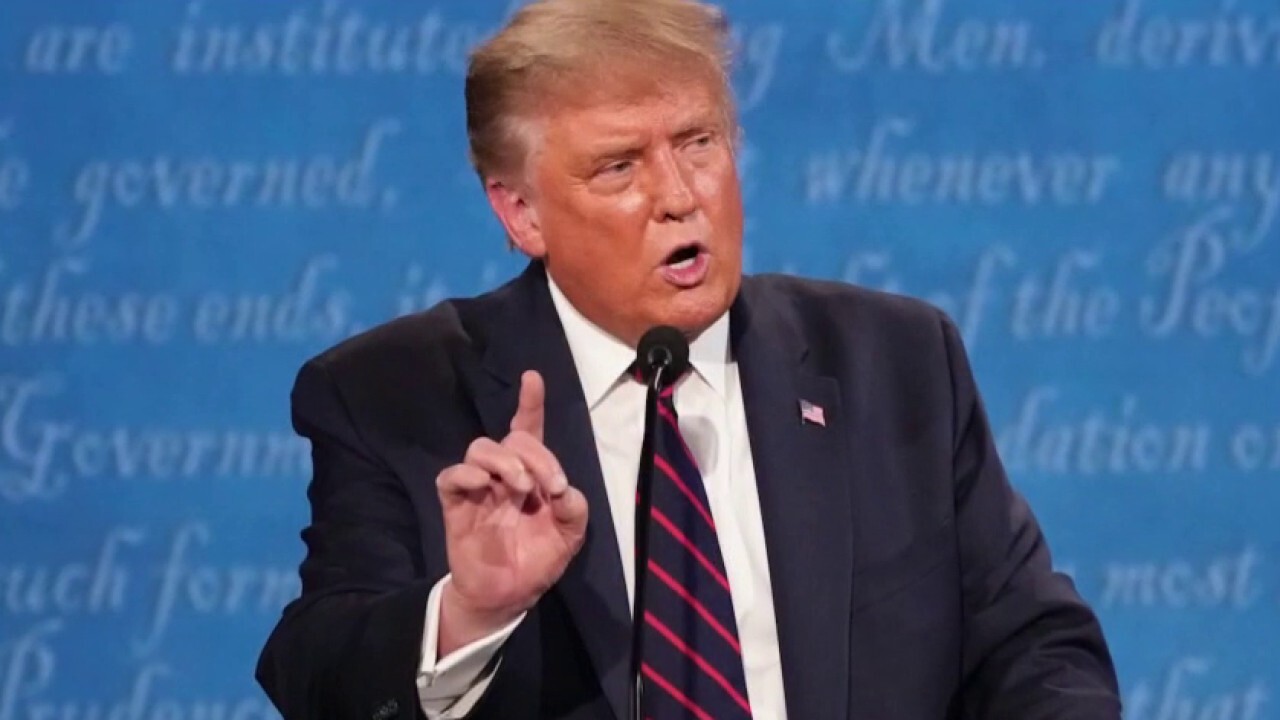 Donald Trump says or does something highly controversial.

Stories appear quoting unnamed advisers saying they know it was a debacle but that Trump is telling people what he did was terrific.

The president blames the mess on the press.

Trump kinda sorta walks it back a bit, but then offers a rousing defense at a rally.

That’s where we are in the aftermath of the first debate, with the commission looking at new restrictions and the conventional wisdom taking hold that the president blew it against Joe Biden. There’s some criticism of Biden for his name-calling, but the laser focus, as always, is on Trump.

The debate debacle “triggered a reckoning among Republicans,” says the Washington Post, “about the incumbent’s incendiary remarks on white supremacy and his baseless claims of electoral fraud, with GOP officials privately expressing alarm about the fallout with key voters.”

The New York Times version says “prominent lawmakers expressed unease about Mr. Trump’s conduct amid mounting fears that it could damage the party on Election Day.” And that three people close to Trump say “he was elated about the debate and saw it as a successful outing for him.”

But such stalwart allies as Mitch McConnell and Lindsey Graham are distancing themselves, with the majority leader (without naming Trump) calling it “unacceptable not to condemn white supremacists,” and “I do so in the strongest possible way.”

Other Hill Republicans deflected reporters’ questions, especially about Trump’s debate response that the far-right group Proud Boys, which has endorsed violence, should “stand back and stand by.” Sen. Mike Rounds said he was watching the Yankees game.

But Tim Scott, the Senate’s only black Republican, said he thought Trump “misspoke” and should correct his answer. “If he doesn’t correct it, I guess he didn’t misspeak.”

Well, Scott got his answer on Wednesday when Trump told reporters: “I don’t know who the Proud Boys are. I mean, you’ll have to give me a definition, because I really don’t know who they are. I can only say they have to stand down. Let law enforcement do their work.”

So in that answer the president is switching from “stand by” to “stand down,” and professing no knowledge of the group, which is reminiscent of how he pleaded ignorance years ago when David Duke endorsed him. Asked about white supremacists backing him, Trump said ‘I’ve always denounced any form of that”–which, while he has occasionally done so, avoids giving reporters a definitive sound bite by not including the phrase “white supremacists.”

There are echoes here of how Trump handled the 2017 violence in Charlottesville, when he condemned “this egregious display of hatred, bigotry and violence on many sides, on many sides.”

As I report in my book “Media Madness,” aides soon persuaded the president to make a statement that “racism is evil” and include “the KKK, neo-Nazis, white supremacists and other groups.”

Steve Bannon feared the president, having been pressured into reading a script, would reignite the controversy if he held a media availability, and that’s what happened the next day. “You had a group on one side that was bad,” Trump told reporters, “and you had a group on the other side that was also very violent, and nobody wants to say that, but I’ll say it right now.” And some of the marchers were “very fine people.” The resulting firestorm burned more brightly than the original one.

None of this is to suggest that Trump supports white supremacists, but how he handles his public comments about such groups that support him.

Lost in the debate uproar is that Biden wasn’t exactly brilliant and sometimes struggled. Some Democratic strategists and officials “privately” told the Post “that Biden at times was shaky at the debate and struggled to get his points across. But they said Trump’s belligerence was the main takeaway.”

Much of the flak has been aimed at Chris Wallace, with the president continuing to say he had to debate the moderator as well as Biden. But the moderator was trying to stop the onslaught of constant interruptions that shattered the rules.
“I never dreamt that it would go off the tracks the way it did,” Wallace told the New York Times.

Wallace says he knows people think he should have jumped in earlier but that he didn’t anticipate the Trump strategy. But eventually, “if I didn’t try to seize control of the debate — which I don’t know that I ever really did — then it was going to just go completely off the tracks.”

What was on his mind? “Desperation.”

The “Fox News Sunday” host told the paper “’m just disappointed with the results. For me, but much more importantly, I’m disappointed for the country.”

For now, he is part of the cycle in which the president is defying and deflecting hostile media coverage while his allies worry about the damage.