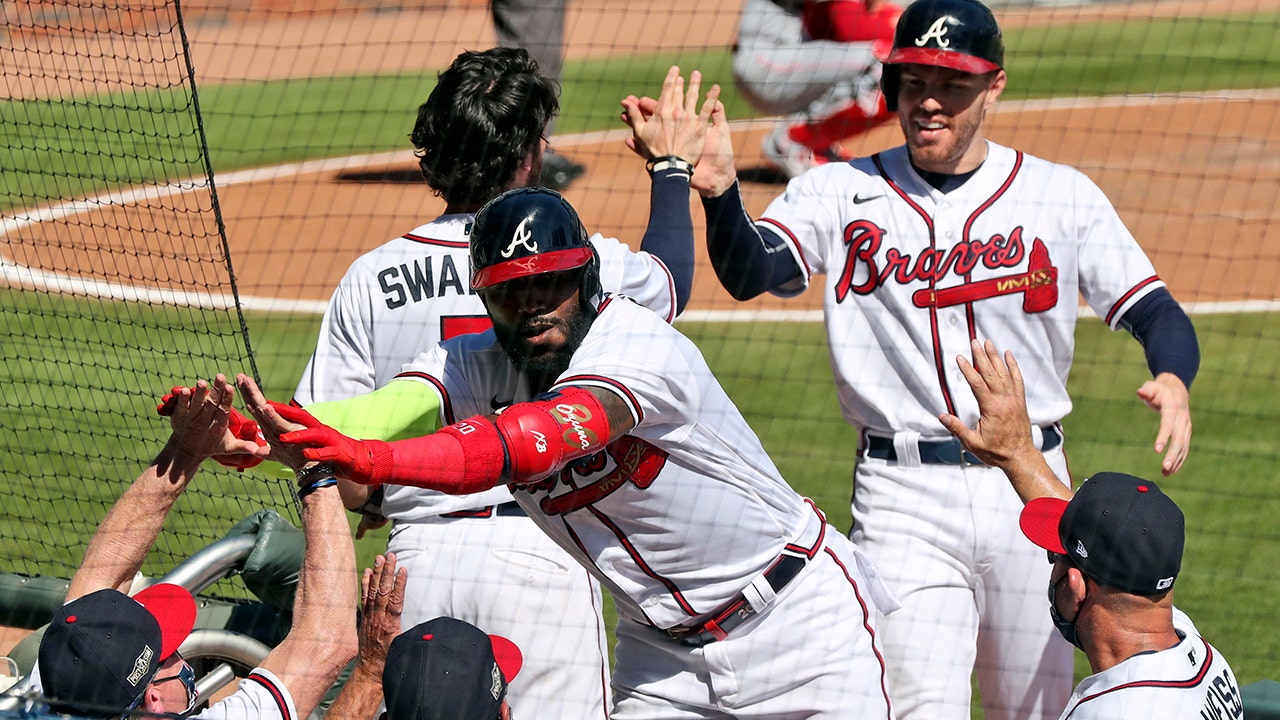 Picture this: The Atlanta Braves winning a playoff series for the first time in nearly a generation.

“I’m overcome with joy,” said slugging outfielder Ronald Acuña Jr., who was not yet 4 years old the last time it happened.

Acuña did his part to end Atlanta’s 19-year run of playoff futility, driving in the first run — the only run that would be needed, it turned out — to spark a 5-0 win over the Cincinnati Reds, completing a sweep of the best-of-three NL wild-card series.

“There’s a lot of energy there that’s contagious,” Acuña said of his team.

There’s also a lot of heartbreak for this franchise, which is best known for managing only one World Series title — a quarter-century ago — during its unprecedented run of 14 straight division titles.

Kings of the regular season.

Chokers of the postseason.

No matter where they played, whether it was Atlanta-Fulton County Stadium or Turner Field or their current home, Truist Park, the Braves always seemed to wind up hosting everybody else’s playoff celebrations.

Finally, they got to hold one of their own, though it was certainly muted in this era of COVID-19.

After Adam Duvall tracked down the final out on a liner to left field, putting a capper on two dominant days of pitching by the Braves, closer Mark Melancon and catcher Travis d’Arnaud allowed themselves a brief hug in front of the mound. The rest of the players lined up across the infield, exchanging non-contact air chops on their way to the dugout.

There was no thunderous roar from a sellout crowd, though you could hear the cheers from a few hundred fans gathered in a plaza beyond the right-field stands to watch on a big screen. It was about as close as anyone could get, other than a small number of family and friends who were allowed to attend the series.

“Well, you know you’ve got to win the series or you’re going home, so it felt like the playoffs,” Duvall said. “But it’s not the same as 40,000 fans screaming and chopping.”

It didn’t seem quite fair for a team that has endured so much postseason misery, but any complaints were quickly cast aside.

Besides, Marcell Ozuna found his own unique way to celebrate in the eighth inning.

After driving one nearly 430 feet into the empty left-field seats for a two-run homer that transformed a precarious 1-0 lead into a comfortable 3-0 edge, Ozuna paused briefly as he approached first base, held up his left arm as it clasping a cell phone, and posed for a selfie that was all in his mind.

When Duvall tacked on another two-run shot, Ozuna prodded him to take a similar selfie in the dugout. It was out of character for the low-key Duvall, but who was going to deny the Braves a little fun?

Not after they snapped a stretch of 10 straight postseason round losses going back back to 2001, matching a record of futility that it took the Chicago Cubs nearly a century to set in the first place.

“Ozuna called me to the end of the dugout and kind of put me in the spotlight right there,” Duvall said. “That’s not really my forte. I’m not, I guess, super flashy or anything, but we were having fun with it.”

It was only appropriate that Ozuna served as the ringleader.

A year ago, he tore up the Braves in the NL Division Series, celebrating in the other dugout as the St. Louis Cardinals scored a record 10 runs in the very first inning of the decisive fifth game.

It was the just latest moment of postseason infamy for Atlanta, which began its series drought with a 3-2 loss to Arizona on Oct. 21, 2001, giving the Diamondbacks a five-game victory in the best-of-seven NL Championship Series.

Jones and Glavine are now in the Hall of Fame. Franco recently celebrated his 62nd birthday.

What followed was three straight years of Game 5 losses in the NL Division Series — all at the Braves’ Turner Field. As if rubbing salt in the wound, the 2003 setback came to the Cubs, breaking their streak of postseason futility that dated back to 1908.

In 2005, the final year in their run of division titles, the Braves at least squandered one away on the road. But it took blowing a 6-1 lead in the eighth inning to the Houston Astros and serving up a series-losing homer in the 18th.

After a five-year hiatus — hey, at least you can’t flop in the playoffs if you don’t make it — Atlanta returned to October baseball in Bobby Cox’s final year as manager.

Cox didn’t have to wait long for retirement to begin. Another brief appearance, it was, as second baseman Brooks Conrad made three errors to give away Game 3 of the NLDS to the San Francisco Giants, who wrapped it up the next night.

Two years later, in an appropriate twist, the Braves lost baseball’s first wild-card playoff game at home to the Cardinals, who benefited from a disputed infield fly call on a ball hit at least 50 feet beyond the infield, prompting outraged fans to trash the field with beer cups, hot dog wrappers and pretty much anything they could get their hands on.

In 2013, another NLDS loss, this one to the Los Angeles Dodgers in four games.

After a massive rebuilding job that sent the Braves tumbling to the bottom of the NL East, they roared back to the top of the division in 2018. And, yes, another familiar ending: A four-game loss to the Dodgers in the NLDS.

Last year’s first-inning meltdown to St. Louis made it 10 in a row, leaving shell-shocked Atlanta fans to wonder if their team would ever win another postseason series.

The streak is over.

It’s on to the bubble in Houston for the NLDS, where the Braves will face either the Cubs or the Miami Marlins.

They can leave their postseason suffering behind.

“The thought is to win every series,” Duvall said, “not so much that if we win the next round, we’ll be further than we’ve been since ’01 or whatever.”