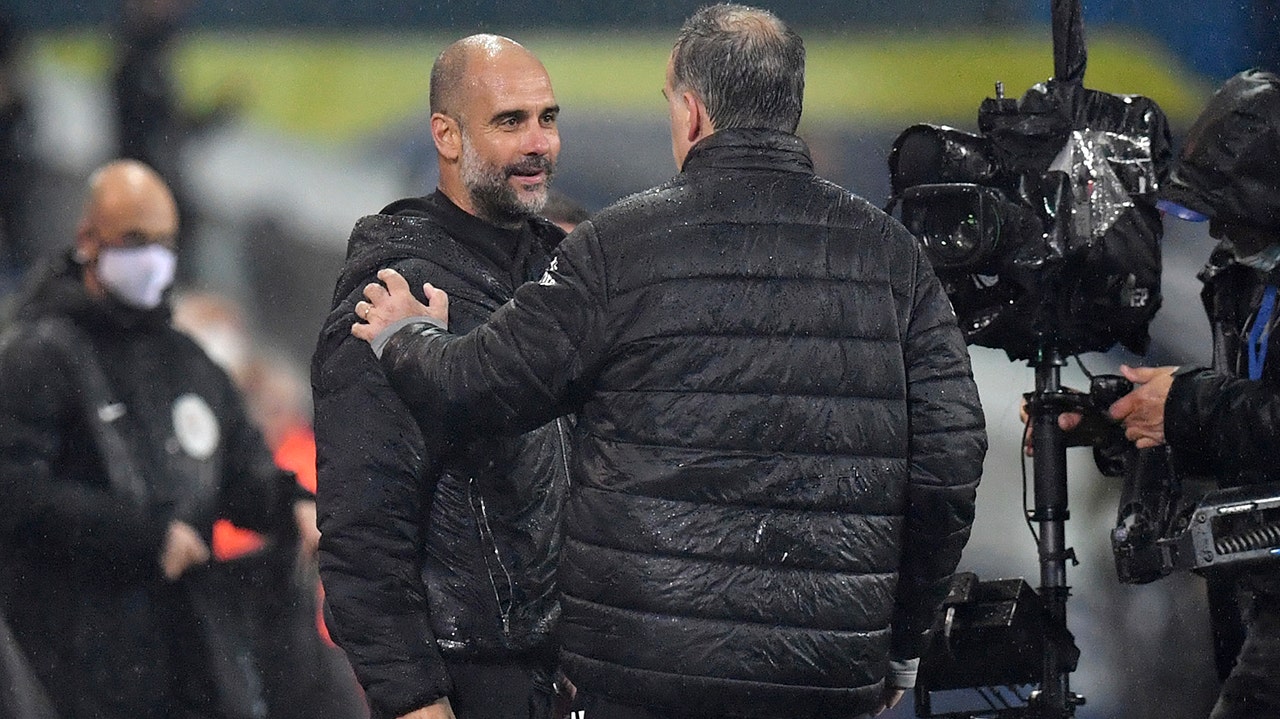 When the final whistle blew at a rain-swept Elland Road, with the managers soaked from head to toe, Marcelo Bielsa went over to Pep Guardiola and placed both hands on his shoulders.

The mentor wanted an instant assessment from his coaching disciple.

Such an exhilarating game of end-to-end attacking football left Guardiola’s mind still a whirl of thoughts.

What to make of seeing his Manchester City side held 1-1 by Bielsa’s Leeds on Saturday? It left Leeds in fifth place and City in 11th.

“Maybe he is much cleverer than me,” Guardiola said, recounting the touchline exchange. “I need time to process.”

It won’t be hard to figure out how City — the 2018 and 2019 Premier League champions — conceded the equalizer in the 59th minute to a team playing only its fourth top division game after 16-year exile.

City goalkeeper Ederson’s weak punch from Kalvin Phillips’ corner allowed striker Rodrigo to pounce on the loose ball and score his first goal since joining Leeds for a club-record fee.

“We had to find an immense physical effort to be able to be on even terms, or slightly better than City for half a game,” said Bielsa, whose bond with Guardiola began in 2006 before the Spaniard went on to achieve coaching greatness with Barcelona.

Now Guardiola’s mission is reclaiming the Premier League trophy from Liverpool, but City is already eight points behind Everton, which is the early leader after beating Brighton 4-2 to make it four wins out of four.

At least 15 players in the City squad — including Ederson — cost Guardiola’s side more than the 27 million pounds (about $35 million) Leeds paid for Rodrigo in the offseason.

While Leeds had seven shots on target, Raheem Sterling’s 16th-minute strike low shot inside the far post was one of only two for City.

“A tough opponent as expected,” Sterling said. “But a draw is not enough for what we aim for. We must do more and better.”

Leeds is five points behind Everton as is Chelsea, which swept to a 4-0 victory over Crystal Palace, and Newcastle, which beat Burnley 3-1.

On the weekend when spectators were originally due to start being allowed back into Premier League games — as they already are in Germany — the doors remain shut on government orders due to a spike in infections.

Everton is enjoying its best start to a season since the 19th century after a seventh straight win in all competitions.

Dominic Calvert-Lewin headed Everton in front in the 16th minute with his ninth goal of the season, but an error by Jordan Pickford allowed Neal Maupay to level for Brighton to equalize after the goalkeeper couldn’t hold onto Leandro Trossard’s volley.

But Yerry Mina headed Everton back in front after meeting a free kick from fellow Colombian James Rodríguez in first-half stoppage time.

Rodríguez then took his tally to three goals since signing from Real Madrid after getting on the end of crosses from Alex Iwobi and Abdoulaye Doucoure.

Brighton, which scored a late second from Yves Bissouma, has three points from four games.

At Stamford Bridge, Chelsea’s lead was secured by Ben Chilwell scoring on his league debut from Tammy Abraham’s flick-on in the 50th minute and the leftback’s cross set up Kurt Zouma for a header in the 66th.

Jorginho added the third from the penalty spot in the 78th after Abraham was tripped by Tyrick Mitchell.

Abraham hoped to get on the scoresheet when Kai Havertz was fouled by Mamadou Sakho. But the striker’s bid to take the spot kick was overruled by Cesar Azpilicueta intervening to hand the ball to Jorginho, who converted in the 82nd.

“Tammy maybe with his youthful exuberance and performance that he’d had in the game, which I think was very good, he made a bit of mistake and wanted to take the penalty,” Chelsea manager Frank Lampard said. “We have a designated penalty taker as you saw with the first penalty and that’s been dealt with in the dressing room.”

American forward Christian Pulisic came off the bench in the 83rd for his first appearance since recovering from a right hamstring injury sustained in Chelsea’s FA Cup final loss to Arsenal in August.

At St. James’ Park, Callum Wilson set up Allan Saint-Maximin to weave through the Burnley defense to put Newcastle in front in the 14th.

Ashley Westwood volleyed the visitors level after the break but Saint-Maximin crossed for Wilson to restore the lead in the 65th. Wilson made it four goals in four league games since signing from Bournemouth when he netted from the penalty spot in the 78th after goalkeeper Nick Pope tripped substitute Ryan Fraser.

Burnley has opened the season with three losses.