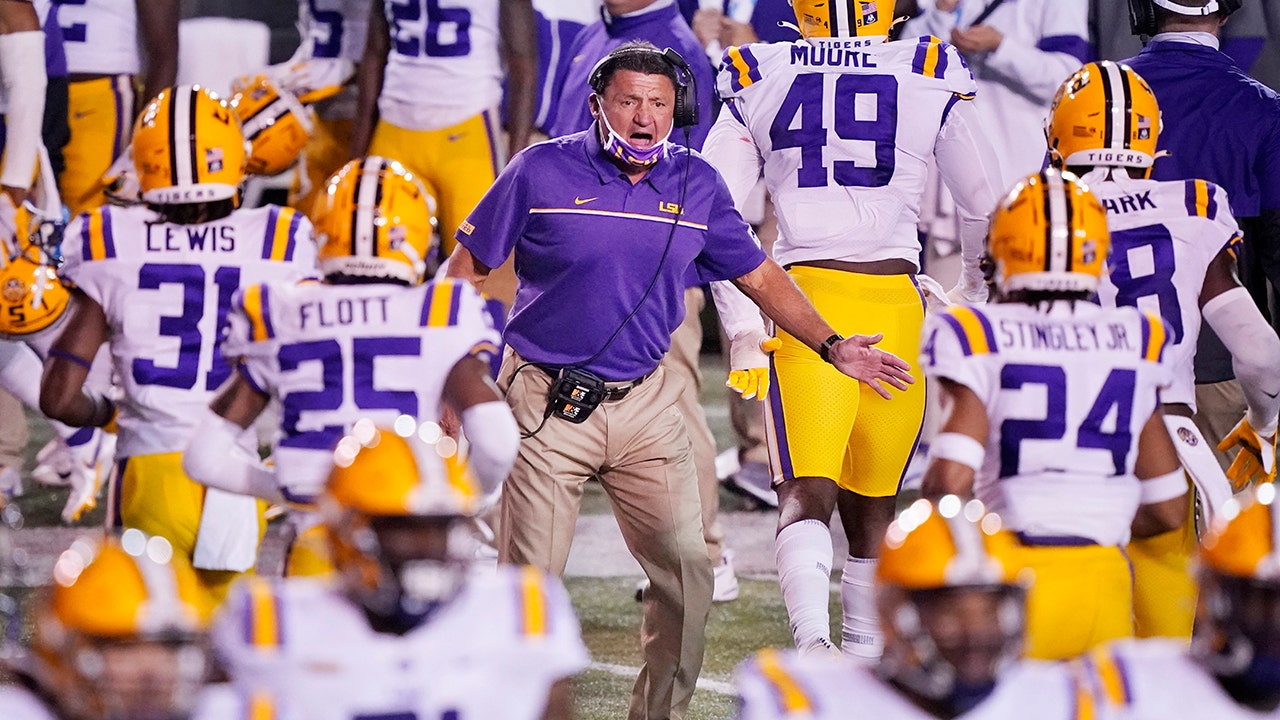 The LSU Tigers proved they could protect their quarterback, and Myles Brennan showed what he could do with some time to throw.

Brennan threw for 337 yards and four touchdowns and No. 20 LSU bounced back to beat Vanderbilt 41-7 on Saturday night.

The defending national champs never trailed after losing their season opener last week to Mississippi State when Brennan was sacked seven times. LSU also extended its winning streak over the Commodores to nine in a series it leads 24-7-1.

“It’s a step,” LSU coach Ed Orgeron said. “Last week we were not pleased, obviously and that’s not LSU Tiger football. Tonight was LSU football. We played like LSU Tigers. But you know what? We practiced like it.”

The Tigers outgained Vanderbilt 498-266, and the defense came up with two interceptions and a pair of sacks.

Brennan completed passes to 11 different receivers against a Vanderbilt defense that had consistent pressure against Kellen Mond in an opening loss at Texas A&M. Orgeron said Brennan played well, stepping up in the pocket and not scrambling to the right like he did in the opener after working on it in practice.

“We went out and performed the way we know how to perform,” Brennan said. “We still have a lot of room to improve. … It wasn’t perfect by any means but this is a good start.”

Terrace Marshall Jr. finished with two TDs on two catches, and Jontre Kirklin had 65 yards receiving and two TD catches, the second a toe-tapper at the back of the end zone off a flea flicker. John Emery ran for 103 yards and a TD.

Vanderbilt (0-2) had its chances with freshman Ken Seals making his home debut. When Randall Haynie picked off an overthrown pass from Brennan, Seals hit tight end Ben Bresnahan with an 8-yard TD pass to pull the Commodores to 14-7 in the second quarter.

Todd Harris Jr. picked off Seals’ pass at the goal line early in the fourth quarter.

“We just got to continue to get better at doing the little things because that was more about fundamentals than anything else,” coach Derek Mason said of his Commodores.

LSU: The Tigers’ offense clicked pretty well. They didn’t need more than 1 minute, 53 seconds on any of their first five scoring drives. Brennan capped one drive on just three plays with a 51-yard TD to Marshall. After Brennan was sacked seven times in the opener, he wasn’t taken down even once in this game.

Vanderbilt: The Commodores did a great job keeping the ball away from LSU with a time of possession just over 20 minutes in the first half. But they too often found themselves starting deep in their own side of the field. Seals put the ball on the money to Ja’Veon Marlow on their opening drive of the third only to have the ball dropped with nobody in front of the running back.

The Tigers got Derek Stingley Jr. back, and he showed why LSU missed him in the opener when he was in a hospital. He had 92 yards on punt returns with a 28-yarder early in the second quarter put LSU at the Vanderbilt 38. Four plays later, the Tigers were up 14-0. His 48-yard return midway through the third set up a field goal.

Then there was his defense where safety JaCoby Stevens says Stingley makes a big difference.

“He’s the best corner in the nation, so guys think twice about throwing the ball his way,” Stevens said. ” And that hesitation … gives our front four time to get there and our front four played lights out.”

Vanderbilt only allowed 2,000 students into the stadium Saturday night to start testing procedures, hoping to ramp up to eventually allow players and coaches’ families in along and maybe fans too. The Commodores also had some cut-outs on the LSU side of the field, including the Vandy baseball team.

Seals’ family took their own approach. The Seals had a room in the hotel up on the eighth floor overlooking the open end zone with a great view of the field. They also put up lights inside the window, making it easy for their son to see where his family was watching him.

Vanderbilt stays at home in a matchup of winless teams with South Carolina.