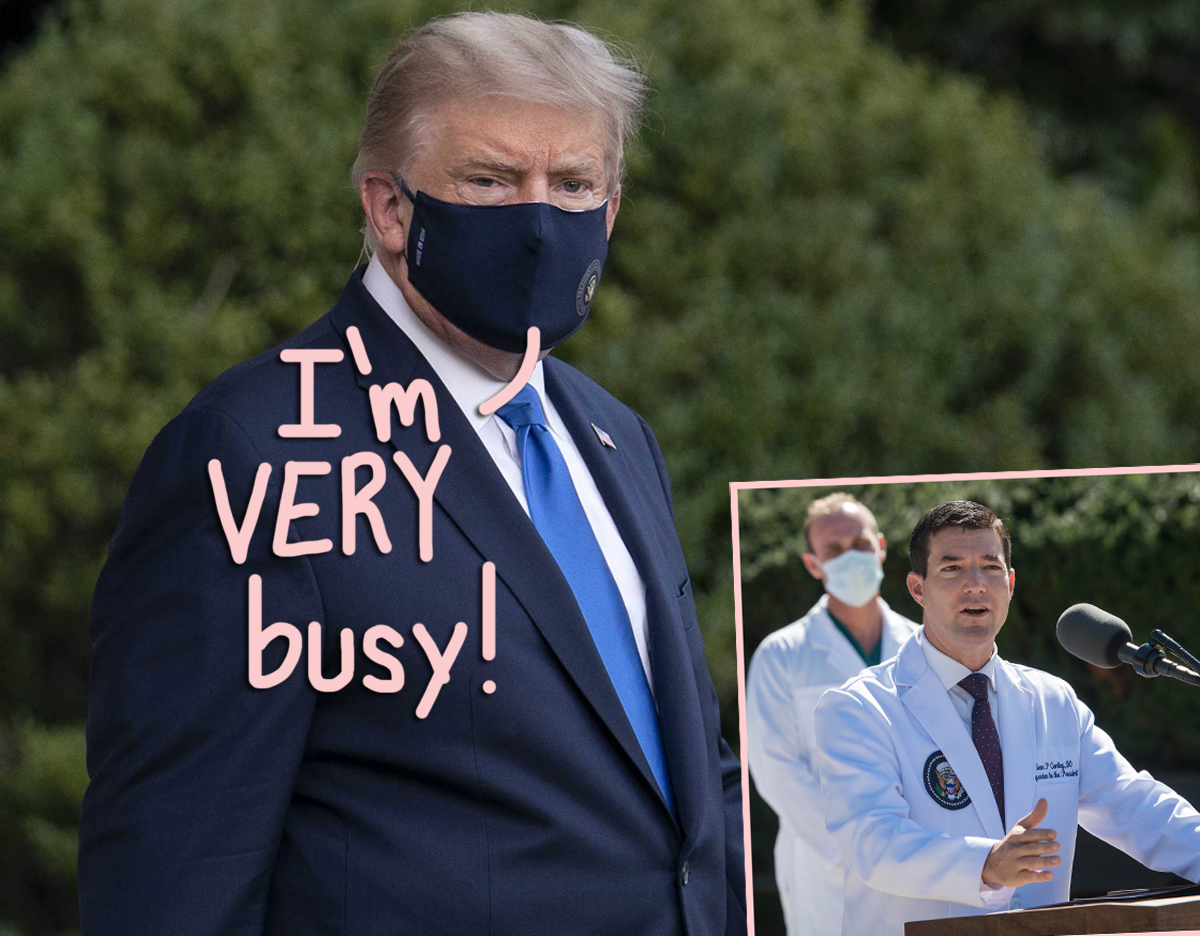 Conspiracy theory time, perhaps… or is the evidence on this one clear as day?!

Donald Trump was captured on camera by an Associated Press photographer, purportedly working at one point on Saturday evening while he was apparently battling the coronavirus during his stay at Walter Reed Medical Center in the Washington, DC area. Only… the pics themselves leave a lot to be answered for, and we’re not so sure of the answers we’ve thus far been getting!

An eagle-eyed journalist from Seattle pointed out that publicly available EXIF data on the photos themselves seemed to suggest that Trump was working at two different desks in two different rooms just ten minutes apart from each other during the Saturday evening shoot.

As you can see (below), journalist Jon Ostrower pulled up interesting (and bizarre) EXIF data from each of two sets of photos which seems to show Trump moved rooms, for some reason:

The photos released by the WH tonight of the president working at Walter Reed were taken 10 minutes apart at 5:25:59 pm and 5:35:40 pm ET Saturday, according to the EXIF data embedded in both @AP wire postings that were shared by the White House this evening. pic.twitter.com/EzeqIkGdf7

And knowing Trump’s penchant (and talent, not gonna lie) for staging things and making himself look more self-important and busy than he actually is (hello, his entire reality TV career!), well, it kind of makes you wonder about what’s going on here…

Oh, and it’s not just the pictures themselves that have people up in arms crying conspiracy theory on this one, either. If you look very, very closely (below) at one of the documents Trump is signing, the page looks… blank?! WTF???

ZOOM: @realDonaldTrump appears to be signing his name to a blank sheet of paper in this photo. pic.twitter.com/xlNX24CXn4

Seriously, what’s that about?! It’s tough to see, but what exactly is he signing, anyways?! And in big, black sharpie?? Weird…

And other people pointed out plenty of other inconsistencies about some of the photos in question, as well:

How does this reflection make sense? Like, the folders are in the way. Why are we seeing a reflection on this side? pic.twitter.com/Mpwu17IvT8

One Twitter user summed it up perfectly — about Donald’s penchant for doing fake “work” that makes himself look good:

“That’s the only kind of ‘work’ he knows how to do. And in his mind, as long as he makes it look like he’s working and his base believes it, that’s every bit as good, if not better, than actually doing something. We’re living through the reality TV presidency.”

“Pretending to work while in front of cameras has been Trump’s entire career.”

A third person threw Trump’s long-standing use of disinformation back in his face:

“Sooo they want us to believe that Trump is in the hospital fully dressed in a suit, dress shirt, cuff links, sitting at a table signing blank sheets of paper? And they don’t believe anyone might think these staged pics were done yesterday on arrival?”

For what it’s worth, Trump’s doctor Sean P. Conley (pictured in the inset, above) revealed on Sunday that the President “continues to improve” while battling the coronavirus, and he could be released as early as Monday, according to CBS News and other media outlets on Sunday morning.

Seriously, though, Perezcious readers, what do U think about Trump’s bizarre (and possibly staged???) photo situation??

Sound OFF about it with your take on everything (above), down in the comment section underneath this post! We want to hear from you!