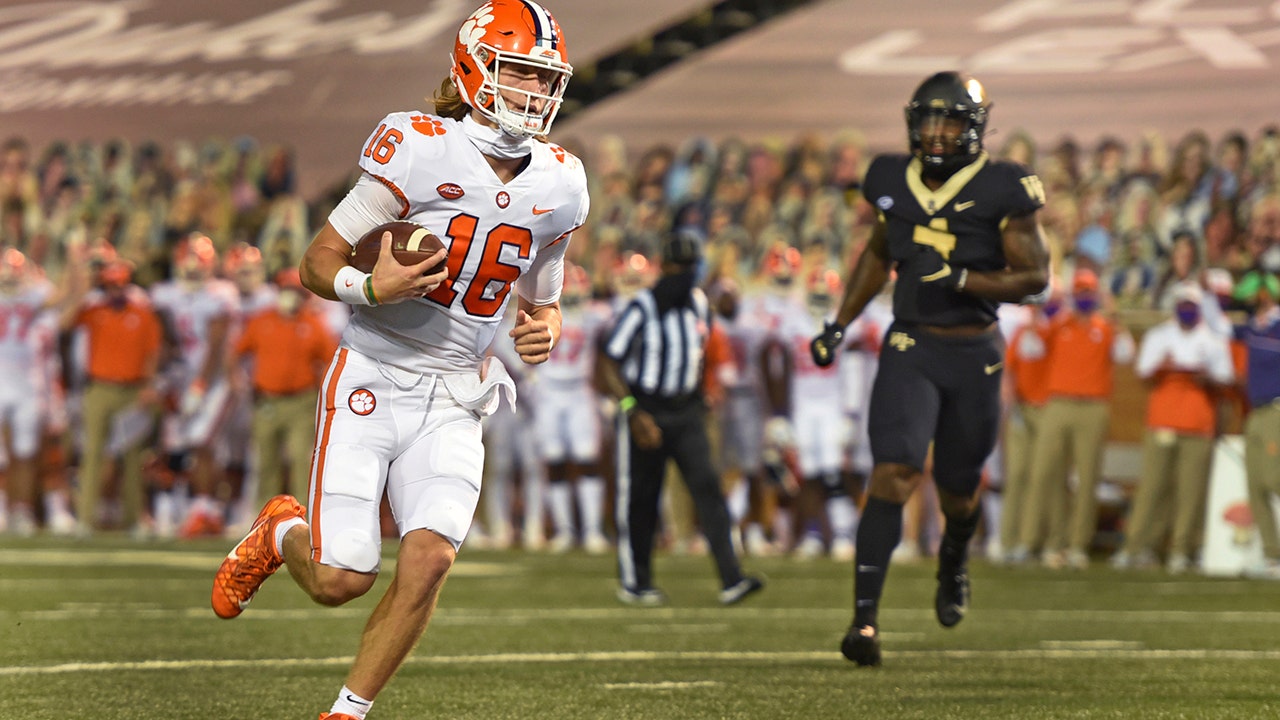 Trevor Lawrence was happy with Clemson‘s win over Virginia. He was also glad the top-ranked Tigers were challenged a bit this early in the season.

Lawrence threw for 329 yards and three touchdowns as Clemson opened 3-0 for the sixth straight year with a 41-23 victory over the Cavaliers on Saturday night.

The Tigers (3-0, 2-0 Atlantic Coast Conference) were not crisp at times against Virginia (1-1, 1-1). However, like so often the past few years when pressed, Clemson and Lawrence found what it took to succeed.

“I guess we’re in a pretty good position when we’re kind of disappointed in an 18-point” win, Lawrencre said. “I’m really glad we got challenged in some new ways. Part of being a great team is making adjustments and getting better.”

A big part is having talented players like Lawrence, tailback Travis Etienne and receiver Amari Rodgers.

Etienne ran for 115 yards and a score. He also caught a 4-yard scoring pass. Rodgers had two TD catches in the final six minutes of the opening half to give Clemson a 24-3 lead that Virginia could not overcome.

“They jump out on teams so quickly, they put you on your heels and never let you recover,” Cavaliers coach Bronco Mendenhall said.

Virginia tried, though, cutting it to 27-17 midway through the third period. That’s when Lawrence found Etienne for a final scoring throw to restore Clemson’s momentum.

It took some time for Clemson to fire up after returning from a bye week. The Tigers led just 3-0 in the first quarter when Etienne went for a 16-yard scoring run — nearly losing his balance after a couple of hits before powering into the end zone. Lawrence and Rodgers opened things up with a pair of scoring passes in the final six minutes before halftime.

Virginia, pounded by the Tigers 62-17 last December in the ACC Championship game, fought back to make it 27-17 midway through the third, but Lawrence found Etienne near the goal line for a 4-yard scoring pass.

Clemson coach Dabo Swinney compared the game to taking “a little Robitussin” for a cough with his team’s stumbles.

Still, Swinney said his players came out with a win and will learn from this one. “We have a lot to improve on,” he said. “We are going to have to improve.”

It was the 38th game with at least one touchdown for Etienne, matching the all-time mark shared by Florida’s Tim Tebow and Louisiana Tech’s Kenneth Dixon.

“I think he just gets into a zone every time he touches the ball,” Clemson offensive coordinator Tony Elliott said of Etienne.

Lawrence extended his streak of pass attempts without an interception to 314, spanning his past nine games.

Virginia, which was nearly doubled up in total yards in the conference title game, hung tough throughout and forced Clemson’s front-line starters to play deep into the final quarter for the first time this season.

The Cavaliers put up 417 yards, the most given up by Clemson in an ACC game the last two seasons, and outgained the Tigers on the ground, 147-137.

Armstrong thought the Cavaliers had a chance with their strong opening drive of the second half that ended with Clemson defensive back Andrew Booth’s one-handed interception in the end zone.

“If we had scored there, we would have had good momentum and the outcome of the game” could’ve been different, he said.

Virginia: Mendenhall saw improvement out of his team from its last loss to Clemson. While certainly not pleased with the end result, he had to take satisfaction with his team’s effort in this one.

Clemson: The Tigers have typically had one early ACC game each season in which things do not follow the pound-the-opponent script of the past five years. And typically, Clemson tightens up its mistakes and moves forward in a big way. Two years ago, Clemson escaped Syracuse with a 27-23 victory and last year it held off North Carolina, 21-20. Both times, the Tigers went on to an ACC championship in dominating fashion.

Clemson continued its social justice initiatives with several players wearing messages on their jerseys where their names usually are. Etienne wore “Peace” on his uniform while Rodgers and backup runner Lyn-J Dixon wore “Equality.” The move came a few days after Swinney said he wasn’t in favor of social justice or any messages on uniforms because he’s a traditionalist when it comes to the look of a college jersey.

Booth made an incredible Odell Beckham Jr.-like grab for an end-zone interception that ended a strong, third-quarter drive for the Cavaliers. Booth, you might remember, was made to ride the team managers’ bus home from Louisville instead of the team plane last season when he was ejected for hitting a Cardinals player in the helmet.

Virginia is home against North Carolina State next Saturday.

Clemson has another night home game, this one against No. 8 Miami next Saturday.