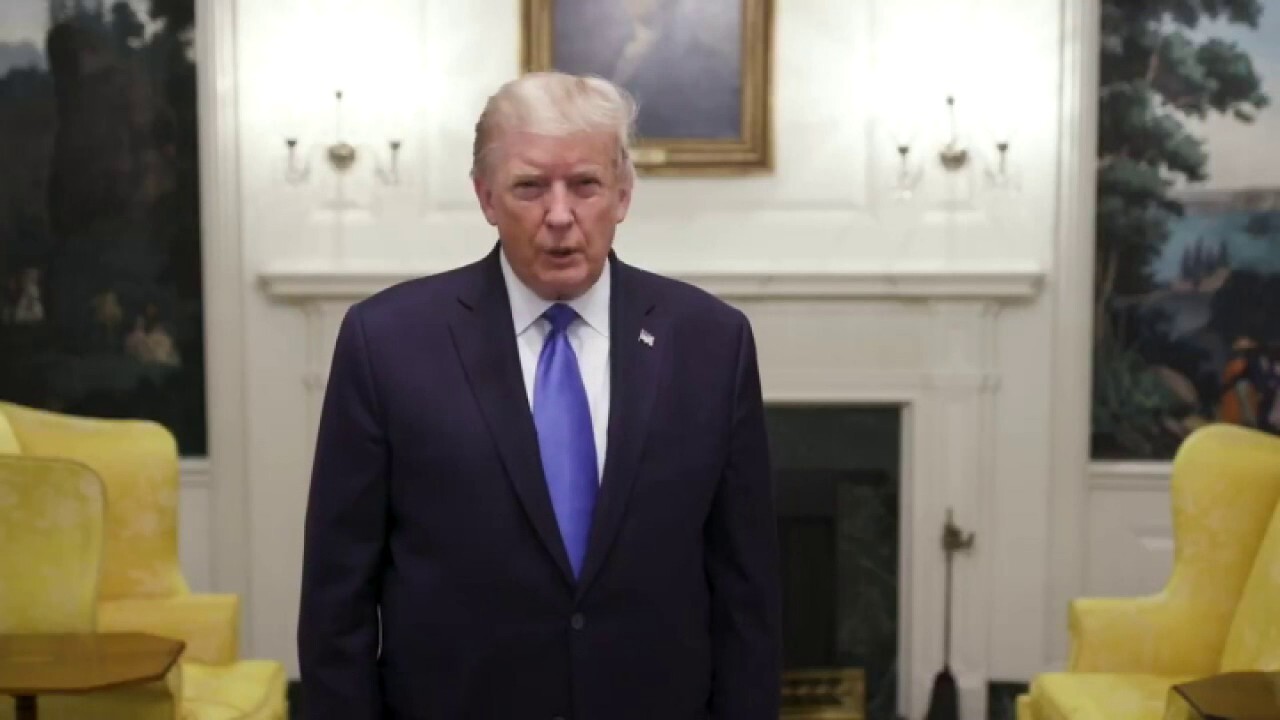 EXCLUSIVE: The Trump campaign is taking over the YouTube masthead for 24 hours beginning at midnight, Fox News has learned, featuring the video of President Trump as he was departing the White House for Walter Reed Military Medical Center to be treated for COVID-19.

A senior Trump campaign official told Fox News that the masthead was a seven-figure buy, and described it as “the most valuable piece of real estate on the internet.”

YouTube sells the masthead for 24-hour increments, meaning the Trump campaign will control it for the entirety of Sunday, the official said.

YouTube users, when visiting the home page, will see the video the president tweeted on Friday evening from the White House, ahead of being transferred to Walter Reed Military Medical Center to be treated for the novel coronavirus.

“I want to thank everybody for the tremendous support,” Trump said in the video. “I am going to Walter Reed Hospital.”

He added: “So thank you very much. I appreciate it. I will never forget. Thank you.”

Murtaugh added: “The President built the world’s best economy once and is already doing it a second time, and never stops working to make America great again.”

The masthead buy comes after the Trump campaign launched their “Operation MAGA,” which includes events featuring Vice President Pence and members of the Trump family in key battleground states across the country as the president fights COVID-19.

Trump campaign manager Bill Stepien, who also tested positive for coronavirus on Friday, is working remotely, but is not slowing down, according to a senior campaign official.

“Operation MAGA will fire up the entire MAGA universe to keep President Trump’s campaign at full speed until our Commander-in-Chief returns to the campaign trail,” Stepien told Fox News. “Vice President Mike Pence, the First Family, our coalitions, and our grassroots supporters will be out in full force to show the real enthusiasm behind the President’s re-election and to show we’re working as hard as he always does.”

After the debate, “Operation MAGA” is set to shift back to in-person events, beginning with Pence’s travel to Arizona.

“While he is on the road, the vice president will stop in Indiana so that he can vote early in his home state,” a campaign official said. “He will then continue on to other events in key states which we have yet to announce.”

“Operation MAGA” is also set to include events featuring the president’s children – Donald Trump Jr. and Eric Trump and his wife, Lara Trump.

The campaign will also host events with coalitions in key states, including, but not limited to “Women for Trump,” “Black Voices for Trump” and “Latinos for Trump,” the official said.

Stepien told Fox News that they “also encourage all of the President’s supporters to pick up the banner themselves by volunteering in our grassroots Army for Trump, flying their Trump flags, putting out more yard signs, and wearing their MAGA gear proudly.”

The effort comes as the president is receiving treatment for the novel coronavirus at Walter Reed National Military Medical Center. On Saturday afternoon, the president said he is “feeling well.”

“I came here, wasn’t feeling so well. I feel much better now. We’re working hard to get me all the way back. I have to be back, because we still have to make America great again. We’ve done an awfully good job of that, but we still have steps to go and we have to have to finish that job,” he said in a tweeted video Saturday.

Trump entered Walter Reed on Friday, where he intended to continue his day-to-day work after testing positive for the coronavirus.