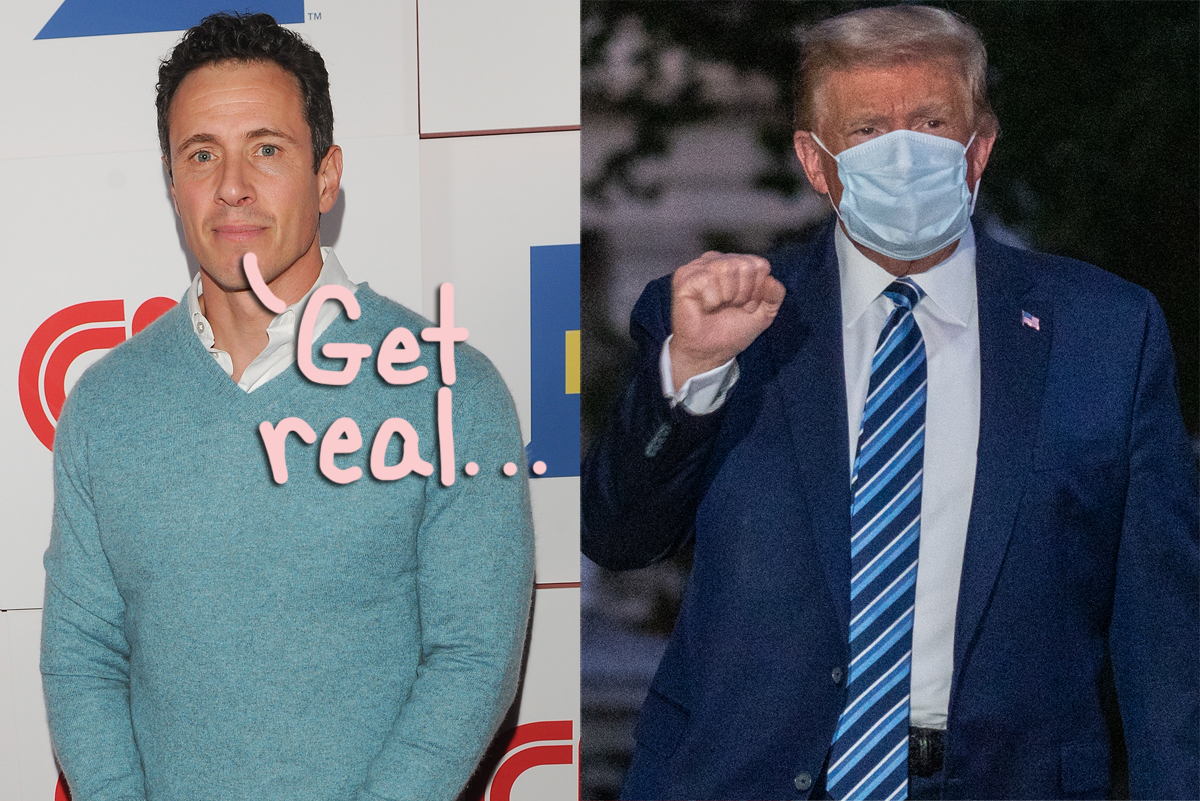 Chris Cuomo has had enough of the bull s**t spewing from Donald Trump‘s mouth AND Twitter account!

The 50-year-old nightly news anchor on CNN‘s Cuomo Prime Time, who himself survived a battle with the coronavirus earlier this year that left him and his family seriously ill for quite a while, is calling out the Commander-in-Chief over his “propaganda” video.

It all started Monday evening on Trump’s Twitter account, when the President posted an, um, optimistic clip about his return to the White House following his (brief) time spent at Walter Reed Medical Center days ago while responding to his COVID-19 diagnosis.

The footage is something else on its own, as you can see (below):

So Trump was supposedly battling this serious, life-threatening illness for a matter of days, until he got back to the White House and decided to make a sleek, well-produced video about his triumphant return?! WHY???

And what about his mask (or lack thereof) in so many videos we’ve seen on social media?!

Thankfully, Cuomo didn’t hold back in blasting POTUS live on air during his show last night.

Speaking about the irresponsible President’s self-interested public activities like the “propaganda” clip, the New Yorker said, in part (below):

“He didn’t just walk into the White House one time with no mask tonight. He had his video crew capture that stupid scene again so he could put out propaganda fronting a lie to his people once again. Just like, ‘Don’t worry about the masks.’ Now he says, ‘Don’t worry about COVID, don’t let it control your life.’ I know there’s sound to it. I’m not going to play it for you. Why should I? How much bull s**t do you need in your life?”

Whoa! And that’s on live TV!

The host continued, too, adding more about how Trump’s quality of care was not exactly like the rest of the world:

“He takes off his mask while he’s still infected like that’s some show of strength. That’s as weak as it gets. Of course you should be afraid of COVID. It’s killed more than 210,000 of us. [But he had] a hospital suite, 24-hour care, experimental drugs and all the best of everything all the time. And I’m not saying he shouldn’t have it. I’m saying you should! Isn’t that his damn job? Imagine if we had access to what he had access to that he ignores, that he abuses. Life would be totally different… ‘I’m too strong.’ No, you’re not. No you’re not, you got carried. And thank god you did because we’ve only got one of you.”

Wow! Not exactly holding back!!

Ch-ch-check out more of Cuomo’s (rightful) anger, on display on video (below):

Thoughts, Perezcious readers? Sound OFF about Cuomo, Trump, and COVID down in the comments (below)!!!