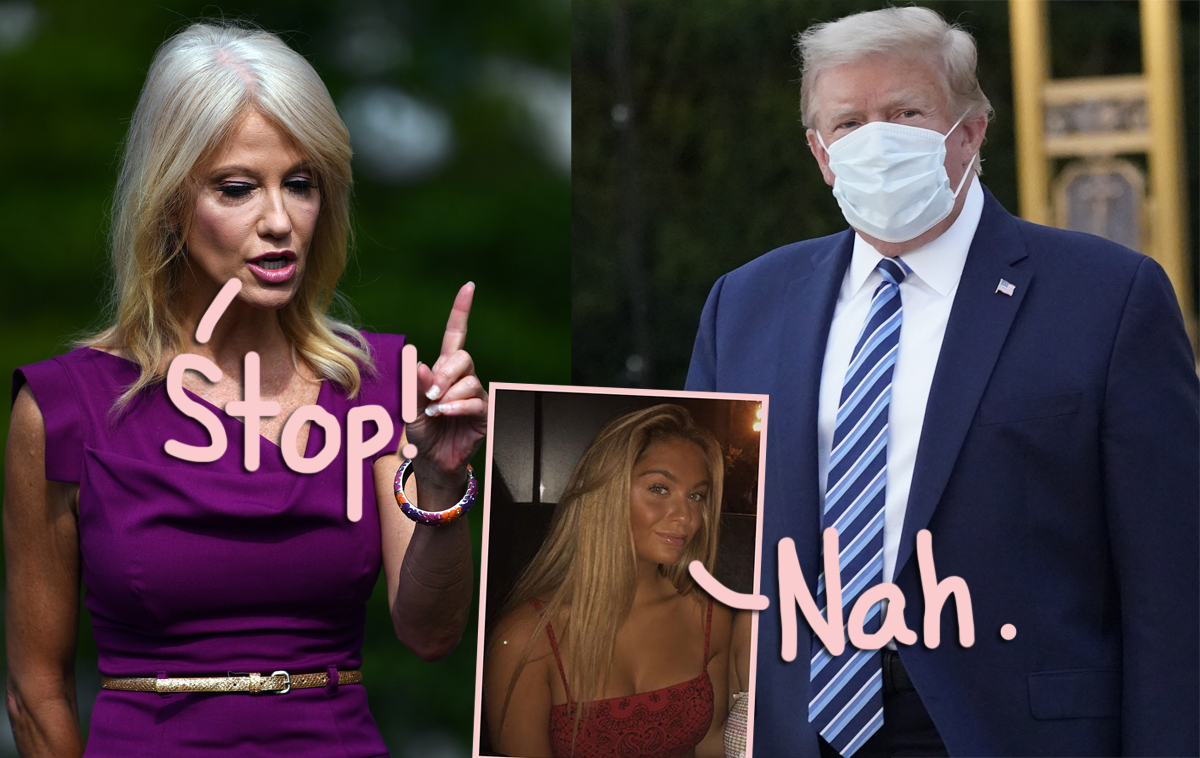 Claudia Conway is at it again on TikTok, telling the world what nobody else will about Donald Trump‘s alleged condition as the President continues to battle the coronavirus.

Of course, Trump is back in the White House now following a brief stay at Walter Reed Medical Center over the weekend immediately after he was first diagnosed with the illness. But just because the Commander-in-Chief is back in his own personal quarters doesn’t mean he’s out of danger yet from COVID-19 — at least, so says famed GOP political operative Kellyanne Conway‘s teenage daughter.

The younger Conway trended on Twitter for much of Monday evening after she purported to share some insider information about how Trump is “not doing better” and actually doing “badly” while continuing to battle the sickness.

It’s big (alleged) news because if true, it’s the exact opposite of what Trump himself has been telling the world.

Case in point: this potentially reckless tweet from yesterday afternoon (below)…

I will be leaving the great Walter Reed Medical Center today at 6:30 P.M. Feeling really good! Don’t be afraid of Covid. Don’t let it dominate your life. We have developed, under the Trump Administration, some really great drugs & knowledge. I feel better than I did 20 years ago!

“Don’t be afraid of Covid.”??? Easy (and dangerous) for you to say as a rich, powerful, well-connected person!!!

So now, despite Claudia’s age, eagle-eyed followers are wondering whether she’s got the real inside track on POTUS’ actual health status in light of her mother’s experience on the President’s staff. These TikTok screenshots (below), in which she writes the Prez is “doing badly” and “they are doing what they can to stabilize him,” went viral and raised eyebrows:

Claudia Conway daughter of Trump advisor Kellyanne Conway, reports Trump is not doing “better” with #COVID19 despite recent Trump photo-ops and return to the White House.

Adding reports that she is #COVID19 positive thanks to her mom exposing her to it and lying about it. pic.twitter.com/Q1ExoT3hMO

In other messages on the social media site, she also confirmed her own COVID-19 diagnosis, having likely gotten the virus from her mom, which had been reported late last week by news outlets.

To be fair to Claudia — and potentially helping to confirm her allegations — other social media users have noticed that Trump’s breathing doesn’t exactly inspire confidence.

Trump appears to be wincing in pain while he breathes pic.twitter.com/YKhGhu0VN0

Still other Twitter users are combing through Claudia’s full TikTok library and finding other interesting tidbits related to the COVID-19 spread sweeping through Trump’s White House right now. One person called the teenager the “supreme whistleblower of our time” for sharing (alleged) information otherwise unreleased by the administration:

I can’t take it ???????? Claudia Conway is the supreme whistleblower of our time. pic.twitter.com/1yWtHYl8Iz

Kellyanne has taken to Twitter herself several times in the last 24 hours, too.

At first, she appeared to attempt to clarify the timeline of her own COVID testing so as to try to defend herself against allegations that she didn’t tell Claudia she tested positive:

Claudia & I are faring well in quarantine. Everyone else is negative

As soon as dr confirmed positive, I told my family & then went public pic.twitter.com/0NLDhiHrHo

And not even a full hour later, Kellyanne attempted to minimize her daughter’s viral speculation and call out social media users for spreading all of the alleged insider info:

My daughter, Claudia, is beautiful & brilliant. She has access to top doctors & health care & lives comfortably

Like all of you, she speculates on social media

We have COVID, but it’s clear who’s really sick

On a more serious note, it’s unclear what the status is as far as Claudia’s relationship with her mother right now. A tweeter captured a video clip in which she appeared to walk back some of her accusations against the political operative regarding the coronavirus diagnosis:

KellyAnne just concerned about herself. So gross. Poor Claudia. pic.twitter.com/dlfvTtR3S6

Another user alleged Claudia was using TikTok’s live streaming function as a way to protect herself from her mother, while “speaking in code” about the ordeal to followers:

IN CODE: “I can’t get arrested again.”

What do U make of all this drama, Perezcious readers? Is Claudia truly the whistleblower of our time, armed with insider info and intent on being the only person in Trump World who will tell the truth about the President’s condition??

Or is this simply a sideshow — and a s**t show — that Kellyanne and her anti-Trump political operative husband George need to get under control ASAP for the good of everybody involved?? Either way, as it turns out, maybe Trump should’ve followed through with that TikTok ban when he had the chance! Ha!!!

Sound OFF about it with your take, down in the comments (below)…