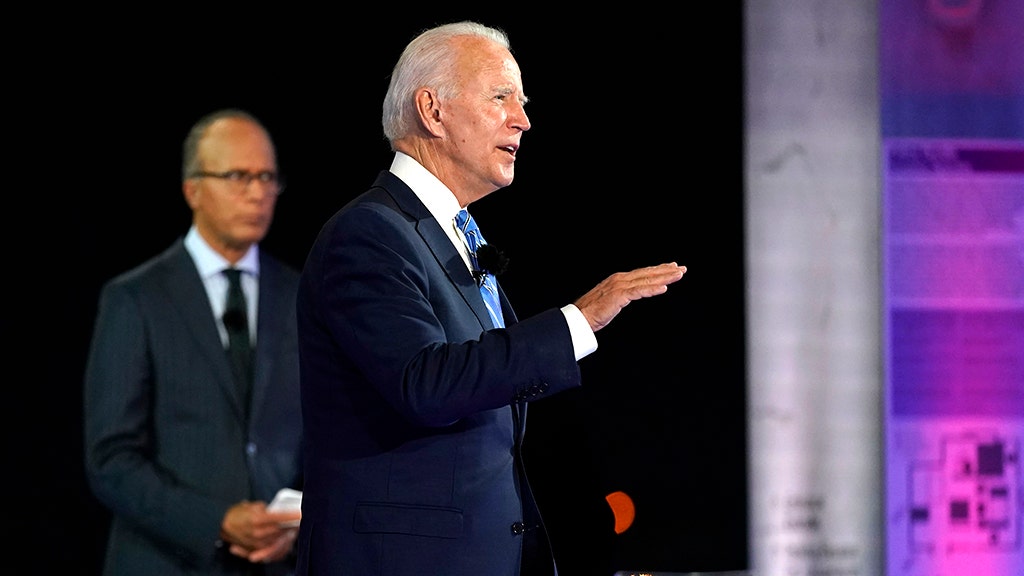 Joe Biden seemed intent to appeal to moderate Democrats during the NBC News town hall on Monday night, and told the audience that he is far from being a socialist and reminded them that he defeated one in the primaries.

CRITICS CALL OUT NBC NEWS OVER ITS BIDEN ‘INFOMERCIAL’

“I look like a socialist?” Biden told the audience. “I’m the guy that ran against the socialist, remember? I got in trouble through the whole campaign, 20-some candidates — ‘Joe Biden was too centrist, too moderate, too straightforward.’ That was Joe Biden.”

Sen. Bernie Sanders, I-Vt., the only democratic socialist to run in the primaries, was not mentioned by name.

Sanders has a loyal following and his supporters are seen as vital to a Biden victory in 2020.  Democratic leadership has been sensitive to any sign of a political divide in the party between the left and moderates.

Rep. Alexandria Ocasio-Cortez, D-N.Y., sent Twitter into a tizzy in August during the Democratic National Convention when she nominated Sanders for president, which was picked up by some in the media as a slight to Biden, but was misinterpreted and simply a “procedural requirement of the convention.”

Trump and his supporters have tried to paint Biden as a puppet for the left-wing of the party if elected.

The town hall was wide-ranging and included a discussion on his “national mask mandate.”

Biden said he doesn’t believe a president can impose a national mandate nationwide, but said as president, he’d require masks on federal property, an executive action with wide reach across the country.

Biden says he’d use the bully pulpit of the presidency to urge all governors, mayors and county executives to use their authority to require masks in their jurisdictions.

Biden said he has “taken on the Castros of the world, the Putins of the world. I’ve been straightforward with them. I let them know it stops here. It stops with me. It stops with me as president. I’m no more a socialist or communist than Donald Trump is—well, I won’t say it. They need not worry. Look at the record. There’s not one syllable I have ever said that could lead you to believe I was a socialist or communist.”