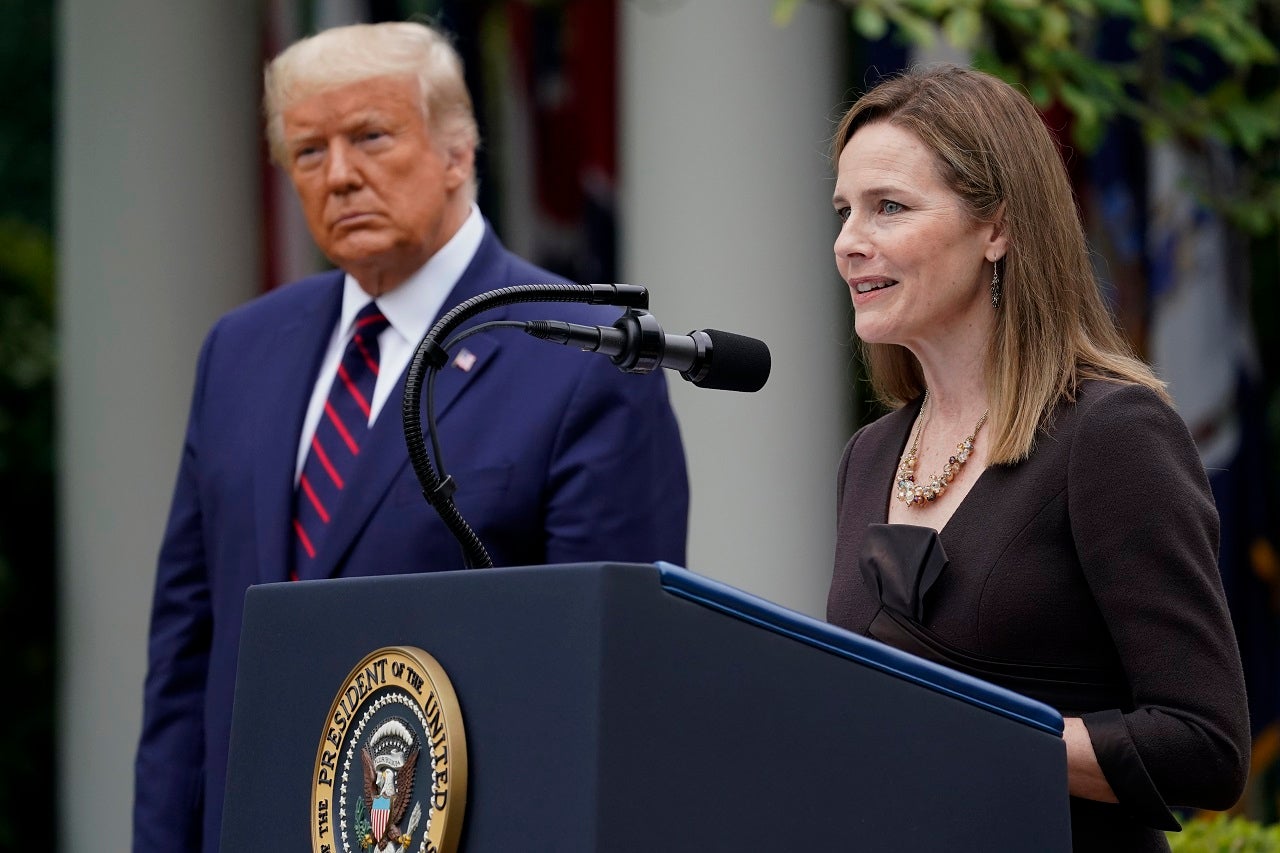 Supreme Court nominee Amy Coney Barrett is, if Republicans have their way, less than a month away from being confirmed as the next justice on the high court.

The 7th U.S. Circuit Court of Appeals judge was officially nominated by President Trump late last month, and Senate Republicans hurried to set a hearing date for the nominee and vowed to confirm her before the presidential election. They are aiming for a floor vote before October is out.

Out of the 53 Republican senators, only two — Susan Collins of Maine and Lisa Murkowski of Alaska — have said they want the Senate to wait until after the presidential election to move on a Supreme Court nominee. That means Republicans, barring any unexpected defections, almost certainly have the votes to move Barrett’s nomination on their own terms.

Democrats have vowed to do everything they can do stop Barrett’s confirmation. But unless they can convince any more Republican senators to oppose the Republican-nominated judge it is unlikely they have the votes to do anything more than protest loudly and potentially force Republicans into some uncomfortable protest votes.

Here is the likely timeline for Barrett’s confirmation effort as hearings begin and a final floor vote nears.

Monday, Oct. 12 will mark the first day of Barrett’s confirmation hearings, including opening statements from Judiciary Committee Chairman Lindsey Graham, R-S.C., and Ranking Member Dianne Feinstein, D-Calif. The rest of the senators will then give 10-minute opening statements followed by 5-minute introductions for Barrett and then the judge’s opening remarks.

This hearing, and all others, will be hybrid in-person and virtual, with senators having the option to join by teleconference. This will be especially important as Sens. Thom Tillis, R-N.C., and Mike Lee, R-Utah, tested positive for the coronavirus last week and are likely to still be under quarantine by the start of the confirmation hearings.

Tuesday, Oct. 13 is when senators will have their first real opportunity to grill Barrett on national television. Democrats will likely ask Barrett about past comments she’s made that have been critical of Roe v. Wade, the Supreme Court ruling that bans states from making abortion illegal, and NFIB v. Sebelius, the Supreme Court ruling that initially upheld the Affordable Care Act (ACA) as constitutional. There is another Supreme Court case scheduled for oral arguments about the ACA’s constitutionality just days after the presidential election, making the ACA a timely issue for this confirmation hearing that’s coming right in the middle of a presidential election.

Republicans, meanwhile, are likely to spotlight Barrett’s strong academic record and praise she’s received for her time on the federal bench since she was first confirmed as a circuit judge in 2017. Expect a lot of questions about “originalism,” the judicial philosophy to which late Justice Antonin Scalia, one of Barrett’s mentors, subscribed.

Senators on Tuesday will have 30 minutes each to question Barrett. Then on Wednesday hearings will continue with 20-minute rounds of questioning. For any questioning after that point senators will each get 10 minutes.

Oct. 15: Markup and outside panel

The Judiciary Committee will convene in a hearing again on Thursday, Oct.15, this time with an outside panel. It is unclear at this point exactly how that panel will work.

But also on that Thursday Graham has said that he plans to begin the markup, or internal debate, on Barrett’s nomination. It is possible that Democrats may try to hold over the Barrett nomination for a week at that meeting, but Republicans, holding the majority in the committee, could change those rules to prevent Democrats from taking that action.

By this point, Tillis has said he plans to be back and attending committee meetings in person, predicting that he will have recovered from the coronavirus by this time.

Graham has said that he plans on Oct. 22 to vote Barrett out of committee. It is likely that Democrats will try procedural tactics to make the vote more difficult for Republicans, but by this time there is a strong chance both Lee and Tillis will both have returned and will be working in person. If that is the case there is little, if anything, Democrats can do to prevent Republicans from advancing Barrett’s nomination.

Senate Majority Leader Mitch McConnell, R-Ky., has said that he will hold a floor vote on Barrett’s nomination shortly after she is voted out of committee. McConnell has not committed to a specific day and it is nearly certain that there will be time for general floor debate on Barrett in the Senate before the vote, so it is not clear it will be on Oct. 23 or even the one or two days thereafter.

In the immediate lead-up to the vote, there will be intense pressure on moderate Republican senators and Republicans in tough reelection fights on how they will vote. A more certain vote count will emerge as senators who have said they are in favor of advancing the Barrett nomination but have not yet committed to voting a certain way announce how they will vote. It appears unlikely at this point that Republican senators will suddenly oppose a Republican-nominated judge after having said they are behind the process.

Some senators will likely make the announcement of how they will vote in their floor speeches as Collins did in 2018 when she announced she would vote for Justice Brett Kavanaugh.

“Susan Collins, in I think one of the most effective and memorable speeches in the history of the Senate, walked through absolutely everything from beginning to end and given the nature of her very blue state cast a very courageous vote for Brett Kavanaugh and that basically determined the outcome,” McConnell recalled at a 2019 speaking engagement.

Barrett, if she is successfully confirmed, will shortly thereafter be sworn in as the newest justice on the Supreme Court in what will likely be a private ceremony led by Chief Justice John Roberts.

As the new justice gets up to speed on the cases of the October 2020 Supreme Court term that’s already underway, she’ll also replace Kavanaugh in the traditional job held by the most junior justice on the court: She’ll serve on its cafeteria committee.

Late Justice Ruth Bader Ginsburg, whose seat Barrett is filling, according to the Wall Street Journal, once called the position “a truly disheartening assignment.”