Big Apple rotten with Jets, Giants off to 0-4 starts

Big Apple rotten with Jets, Giants off to 0-4 starts 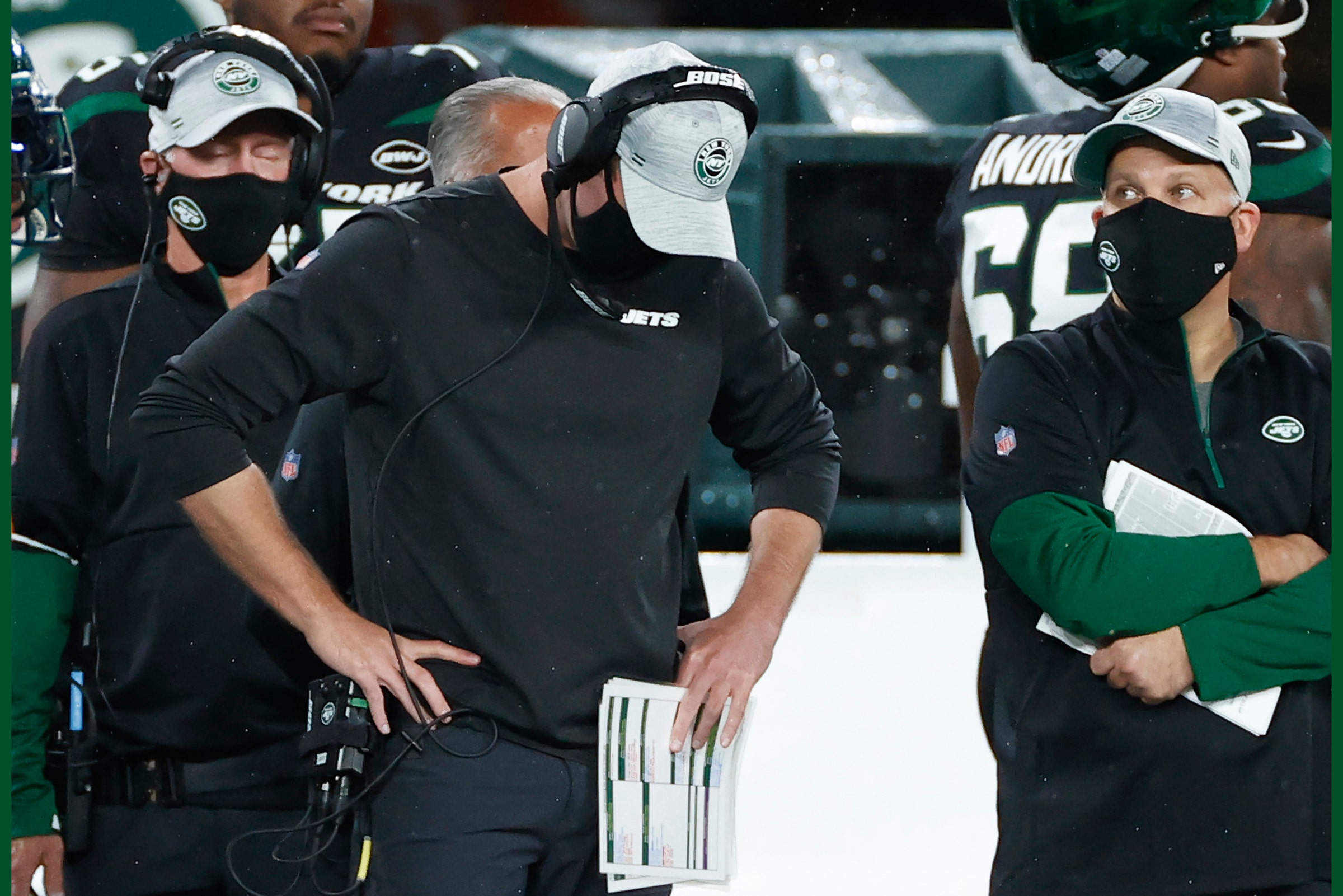 No wins, eight losses, and lots of frustrated fans.

The Big Apple is pretty rotten when it comes to its professional football teams, and it’s tough to imagine things getting better any time soon.

Both the Jets and Giants are 0-4 for the first time since 1976 — the only other time they’ve gotten off to similar dismal starts. They’ve never both opened a season 0-5, but they have a shot at that dubious distinction. The New York teams are both underdogs in Week 5: the Jets at home against Arizona and the Giants at NFC East rival Dallas.

Former NFL offensive lineman Damien Woody, who played for the Jets from 2008-10, lives in New Jersey and works for ESPN as a football analyst. He might as well have been speaking for every tri-state area fan during a rant on ESPN’s “Get Up” last Friday — and that was before the Giants lost to the Rams on Sunday.

“They are disgusting to watch on television!” an exasperated Woody said. “I am literally forced to watch disgusting football every week!”

He’s not alone, of course.

Just four games into the NFL season, the Jets and Giants have firmly established themselves as the league’s worst teams. The Giants rank 31st in this week’s AP Pro32 poll, with the Jets dead last. And that’s even with Houston and Atlanta also still winless.

“I think it’s a joke,” said Rob Janicke, a 47-year-old Jets fan from Staten Island. “I know location doesn’t mean what it once did years ago, but having two utterly embarrassing teams in the NYC area is unacceptable. The ownership groups of both teams have been pretty clueless for a long time now. Bad drafts, poor hires and not allowing real football people to run the show. I know there’s a long way to go — assuming they play the full season — this year, but both the Jets and Giants may be in a race for the first overall pick in next year’s draft.

“That’s not what you want for two teams in the biggest market in the world.”

At least the Buffalo Bills — the only NFL team that actually is headquartered in and plays in New York state — are 4-0. But being closer to Toronto than Broadway takes them out of the rooting section of the tri-state area.

So, the fans’ venom is spewed at the Jets and Giants. How about this: The San Francisco 49ers have more wins at MetLife Stadium — two — this season than the teams who call it home. And there’s plenty of blame to go around for each team’s struggles, depending on who you ask.

Many Jets fans want to see coach Adam Gase gone, convinced he’s not the right person to lead quarterback Sam Darnold to the next step in his progression. Others point to ownership. Some to general manager Joe Douglas for not doing enough to put together a competitive roster. Still others half-jokingly believe this is all part of some curse brought about by Joe Namath’s infamous Super Bowl guarantee back in 1969.

Stephan Pechdimaldji is a 46-year-old resident of San Ramon, California, who rooted for the Jets while growing up on Long Island and then northern New Jersey before moving to the West Coast in 2006. His passion for his favorite team hasn’t waned with his move across the country, but his frustration is clear — even 3,000 miles away.

“While I realize that the Johnsons will never sell the team, I do think that it all starts from the top,” Pechdimaldji said. “Jets fans are a resilient bunch, but I’ve never seen the fan base so despondent and down. And I lived through the Kotite years. Hopefully, they can right this ship at some point, but Jets fans are not collectively holding our breaths.”

Ah, the Rich Kotite years; then-owner Leon Hess fired Pete Carroll so he could hire the former Jets tight end as coach. In 1996, the Jets started 0-8, beat Arizona on the road but finished 1-15 — the worst record in franchise history.

This year’s rough start has some Jets fans’ sights set on the No. 1 overall pick and Clemson quarterback Trevor Lawrence. The “Tank For Trevor” chants might grow a bit louder now, especially with Darnold missing at least this week’s game with a sprained shoulder.

Darnold’s injury is just the latest in a lengthy list of them this season for the Jets. The Giants suffered a massive injury loss of their own when Saquon Barkley went down for the season in Week 2 with a torn ACL.

That hasn’t helped the Giants’ struggling offense, which scored a league-low 47 points. Daniel Jones is still committing too many turnovers — he has seven already — and that has some Giants fans wondering if maybe their team could be in the Lawrence sweepstakes, too.

Coach Joe Judge seems to be getting a pass in his first season as he tries to navigate things in his first NFL job as the top guy and during a pandemic. But GM Dave Gettleman, who took over with little in the cupboard late in 2017, has been under fire.

The Giants have made the playoffs just once since the 2011 season and are 9-40 under coaches Ben McAdoo, interim Steve Spagnuolo, Pat Shurmur, and now Judge.

But that one postseason appearance is one more than the Jets have made since the 2010 season, back when Rex Ryan and his big personality seemed poised to take over the town — and the NFL.

“I did talk to a friend of mine, one of my best friends who is a Jets fan, and I said: ‘Things could be worse. I could be a Jets fan,'” said Bob Gray, a 60-year-old resident of West Caldwell, New Jersey, and a longtime Giants fan. “The Jets are in a much worse situation, from a player personnel situation to coaching to a front-office thing. I think it is way too early to make any judgment on Judge. I have not faulted him really at all, as far as where they stand in their play.”

So, things just have to get better from here, right?

“Both teams need real football people to run the ship, tie the GM and coaches at the hip, and let them do their jobs,” Janicke said. “If they don’t change, football in NYC will continue to be about as good as basketball has been in New York for the past 20 years.”