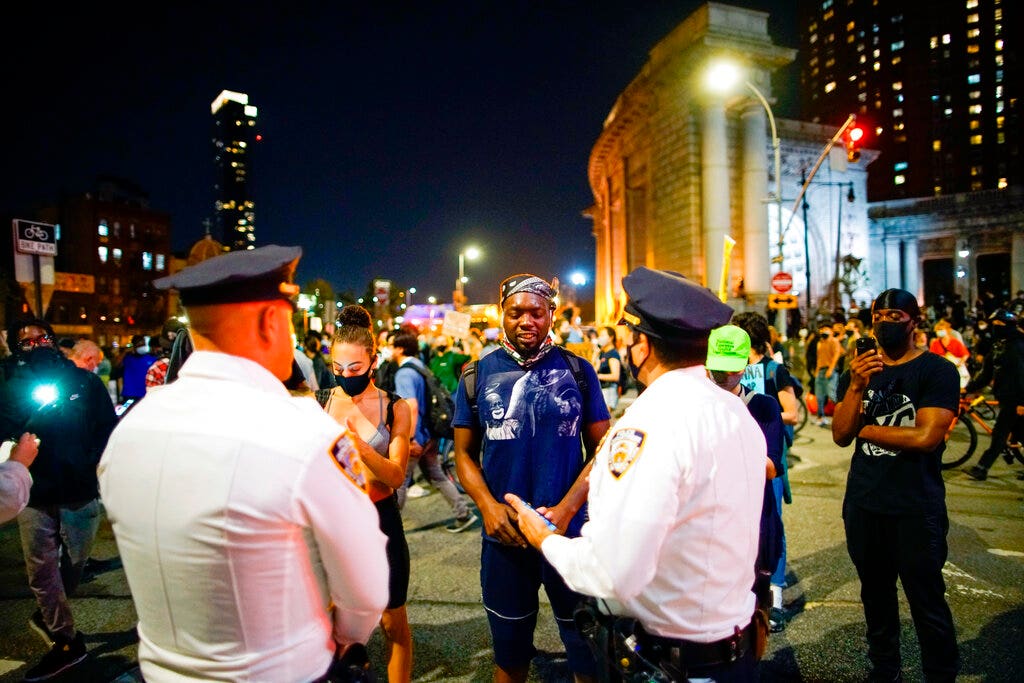 Shootings have spiked 127% in New York City this year, and Gov. Andrew Cuomo is calling for Mayor Bill de Blasio to get it under control, but city officials say liberal pushes to “defund the police” have hindered the NYPD’s ability to keep the city safe.

“Defunding the police is perhaps the worst idea in NYC government history,” Republican Councilman Robert Holden told Fox News. “We can’t legislate using fashionable slogans that fit on protest signs. It hurts every New Yorker. The NYPD are the gold standard for law enforcement around the world. Any issues that need to be addressed require more training, which costs money.”

The city, however, disagrees, with de Blasio backing a city council vote in July to slash the police budget by $1 billion. Crime has only worsened in recent months and police response times have grown.

Compared to September 2019, shootings last month jumped to 152 from 67, murders increased citywide from 51 to 29, and burglaries climbed to 1,255 from 912, according to the latest New York City Police Department’s crime report released at the beginning of October.

Although shootings and murders are up from their recent lows, they are nowhere near the crime rates of the early 1990s, when over 2,605 people were murdered in New York City.

CUOMO PRESSES NYC TO CLEAN UP ITS ACT, HINTING AT NATIONAL GUARD ASSITANCE

Holden told Fox News “there is definitely a correlation” between recent social justice reforms and ballooning crime statistics in the city.

“We have had well over 1,000 shootings this year. The deadly combination of closing Rikers, getting rid of cash bail, defunding the police and putting them under the fear of going to jail if they need to apprehend a violent suspect are all part of a pro-crime atmosphere that emboldens violent criminals,” he said.

“Despite the unparalleled challenges they face every day, our officers continue to engage with the community and zero in on the drivers of crime,” Police Commissioner Dermot Shea said in a statement.

In late September Shea told FOX Business’ Maria Bartiromo that the cuts to the city’s policing budget, which eliminated $352 million in overtime to officers, was a “double whammy” to the city’s safety when paired with the usual uptick in crime expected during the summer months.

An NYPD spokesperson told Fox News that the October class of new recruits to the department has been canceled and did not specify when there will be another incoming class.

The last admitted class graduated in January and the NYPD has not hired a new officer since, a spokesperson from the Police Benevolent Association (PBA) told Fox News.

That too, on top of what de Blasio says is economic angst caused by the coronavirus pandemic that killed over 32,000 people and infected over 470,000 in the state — making New York the second state with the highest death toll in the country– has forced local lawmakers to reconcile pulling officers off the streets and reallocating $354 million to mental health, homelessness and education services even as the city’s crime continues to skyrocket.

Slashes to the NYPD’s $6 billion budget came as a national reckoning over police brutality and race pushed lawmakers to confront the demands of protesters decrying the use of police force following the death of George Floyd in Minneapolis.

Floyd, an unarmed Black man, died in police custody in late May after an officer kneeled on his neck for over eight minutes.

His death sparked protests across the nation with calls to “defund the police” and reallocate funds to other community priorities that eliminate the need for a response by armed law enforcement agents.

“There is a real need to create discourse on policing, which focuses on public safety while giving those who have had negative experiences with the criminal justice system some relief,” Holden said. “Considering the safety issues that the city is up against, no, I do not think that budget cuts are necessary, and my fellow Council Members who believe that the slashes should go further need to wake up and stop dictating policy from their ivory towers.”

De Blasio defended the city’s budget cuts earlier this year, calling it a “huge reinvestment in communities while we still stay safe as a city.”

Still, data shows that the gap between 911 calls to a dispatcher and police units arriving on the scene of a call for help has also widened since the budget reduction, but the PBA says the NYC council was forewarned about the potential lag time ahead of their vote in July.

“It’s really quite something to hear city council members now try to demonize police officers and say oh you’re engaged in the slow down because response times have gone up when you were warned exactly what the impact of cutting the budget by $1 billion and effectively cutting the headcount of officers would have,” the union representative told Fox News.

Data showed that 911 calls for “critical crime in progress,” which includes armed violent incidents, robberies and burglaries, took an average of 8 minutes and 5 seconds throughout the month of August for officers to arrive on the scene after the first call to dispatchers was made. This time was up from 6 minutes and 49 seconds during the same period in 2019.

Calls for minor crimes took about 21 minutes and 13 seconds in August for police to arrive, an increase from 20 minutes and 44 seconds from the previous year.

Slowed response times were heightened by the ongoing protests in NYC, as police and demonstrators sparred and 911 calls surged.

In the first week of June, it took police took more than 25 minutes to respond to “critical crime” reports, the slowest police response in the more than six years for which data is available. Overall, it took police 12 minutes and 17 seconds to arrive at reported crimes in progress in June, a four-minute jump from a year earlier, news outlet “The City” reported.

“Don’t turn around and try to blame the police officers for it,” the PBA spokesperson said.