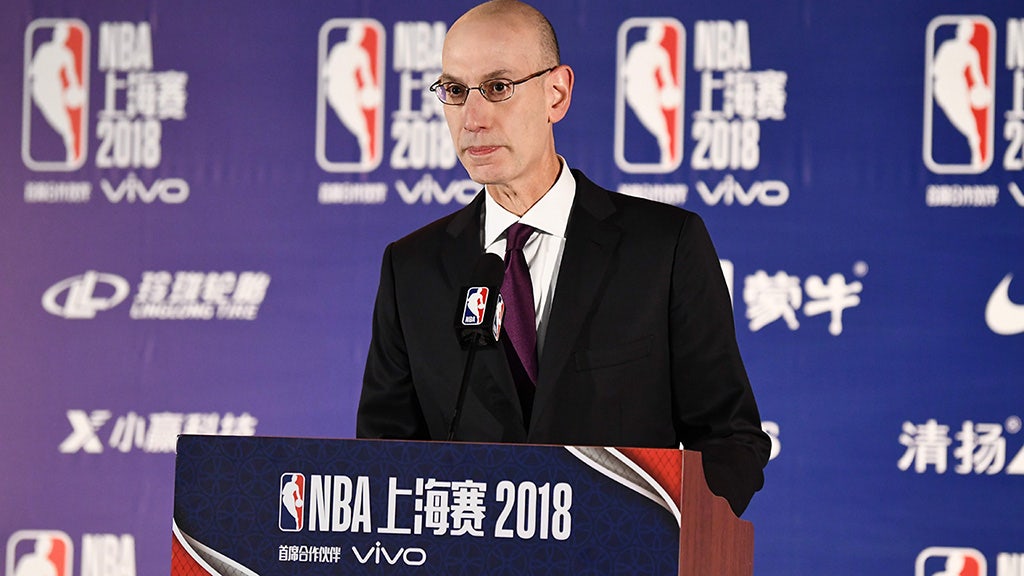 NBA Commissioner Adam Silver made an appearance on NBA Countdown earlier this week to talk about the social justice messages that the league has on their basketball courts, as well as on players’ jerseys.

Silver says these messages will be “largely left off the floor” next season.

“We’re completely committed to standing for social justice and racial equality and that’s been the case going back decades,” Silver said in the interview. “It’s part of the DNA of this league. How it gets manifested is something we’re gonna have to sit down with the players and discuss for next season.

LEBRON JAMES, LAKERS MOVE WITHIN ONE GAME OF NBA TITLE

Silver continued: “I would say, in terms of the messages you see on the court and our jerseys, this was an extraordinary moment in time when we began these discussions with the players and what we all lived through this summer. My sense is there’ll be somewhat a return to normalcy, that those messages will largely be left to be delivered off the floor.

“And I understand those people who are saying ‘I’m on your side, but I want to watch a basketball game.’”

Friday’s Game 2 of the series between the Los Angeles Lakers and Miami Heat was watched by 6.07 million viewers, a drop from last year’s Game 2 Finals, and from this year’s Game 1 (7.41 million). Game 3 ratings fell again to 5.94 million viewers, marking the least-watched NBA Finals game on record, according to Sports Media Watch.

Some have consistently pointed to the NBA embracing social justice issues right off the bat of its restarted season in the bubble. The NBA allowed players to wear social justice messages on the back of their jerseys and painted Black Lives Matter on the court for each game that was played at Disney World in Orlando, Fla., while staying silent on other major issues in the world, including atrocities in China.

For those reasons, and because Games 1 and 2 were relatively uncompetitive, fans appeared to have turned off the NBA.

While a number of reasons could have played into the dip, including the unusual timing of the season caused by the pandemic, Cruz took to social media to suggest that player protests were the cause.

“Not surprising. Personally speaking, this is the first time in years that I haven’t watched a single game in the NBA Finals,” he said using the hashtag “#GoWokeGoBroke.”

The tweet caught the attention of Cuban who took offense to the Senator’s stance.

“A US Senator with 3 @NBA teams in his state, employing thousands of people and he is rooting for their businesses to do poorly,” he wrote. “This is who you are @tedcruz . Every minute of your life, this is exactly who you are.”

Cruz fired back saying that he has been a life-long Houston Rockets fan and has always supported his state’s teams but decided against it after claiming that the NBA “is engaged in a concerted effort to (1) insult their fans & (2) turn every game into a left-wing political lecture. That’s dumb.”

But Cuban wasn’t buying it.

“You are so full of s–t. You haven’t watched a game of the finals, how would you know what is being said or done? Since when is a desire to end racism an insult to anyone or political? And you don’t think using #GetWokeGoBroke is a partisan insult?  Again, this is who you are.”

Cruz replied: “I wish @mcuban loved his fans as much as he loves Chinese money.”

“Shame on me for putting American Civil Rights and Justice, creating jobs, growing our economy and healthcare reform over twitter proclamations,” Cuban said.

The Lakers came away with a 102-96 victory over the Heat in Game 4 on Tuesday. Next, Game 5 will be played on Friday.