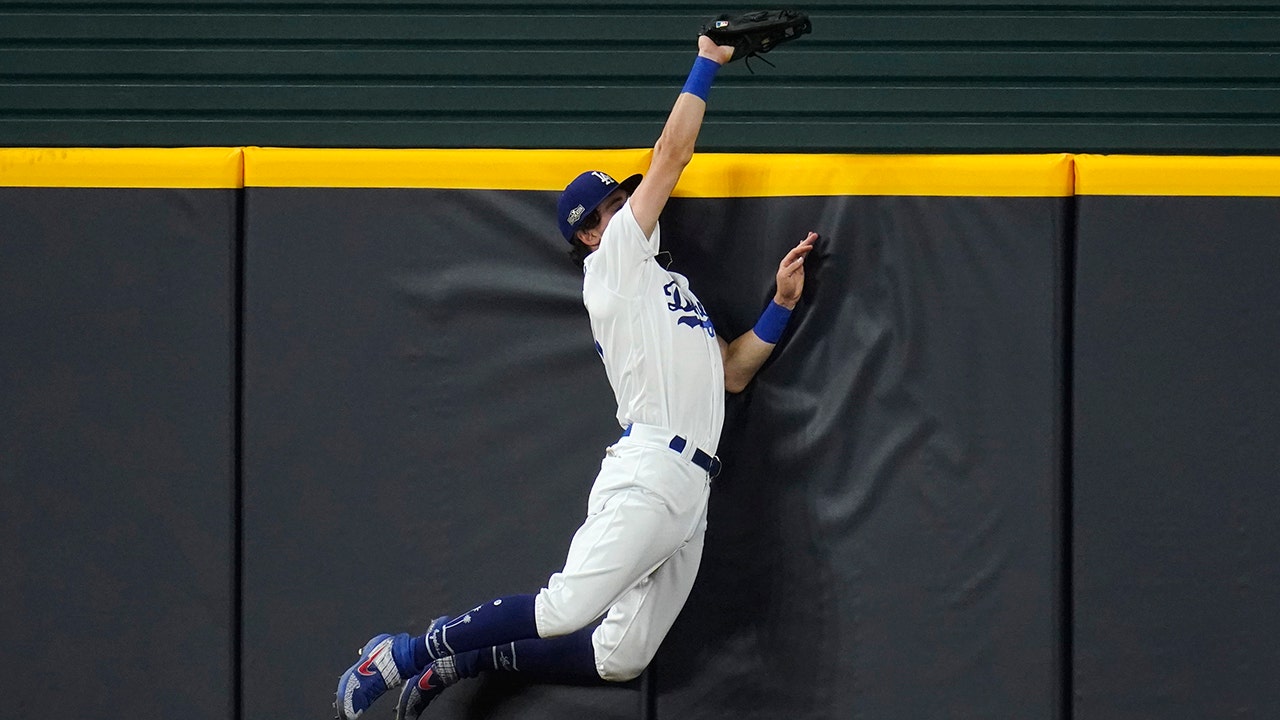 Cody Bellinger would take the homer-robbing catch over the home run he hit if he had to pick from the two. The Los Angeles Dodgers needed both from their MVP center fielder.

Bellinger nearly went to a knee to hit his long home run, and later made a spectacular, leaping catch at the center-field wall to take away a go-ahead shot from Fernando Tatis Jr. as the Dodgers barely held off the San Diego Padres 6-5 Wednesday night.

Los Angeles took a 2-0 lead in the NL Division Series when Joe Kelly finally got the last out with the bases loaded in a tension-filled ninth inning.

“It’s going to take a while to wind down from that one,” said Bellinger, the 2019 NL MVP. “That’s postseason baseball right there.”

Kelly retired Eric Hosmer on a routine grounder to earn the save after Dodgers All-Star closer Kenley Jansen wobbled in the ninth. Los Angeles can sweep the best-of-five set from its NL West rival Thursday night.

The Padres were down one with a runner on and two outs in the seventh when Tatis, the 21-year-old budding superstar, hit a towering drive to center. Bellinger ran nearly 100 feet while watching the ball, then jumped and extended his gloved right hand above the 8-foot wall to make the grab.

“I just kind of turned around as fast as I could, got to the fence and saw that it was probable, so I decided to try to time up the jump, and it’s how it worked out,” Bellinger said. “I didn’t know if it was a homer or not, but I knew I caught it.”

Brusdar Graterol, the second Dodgers reliever after starter Clayton Kershaw, slung his glove and cap away and thrust both arms into the air to celebrate. Graterol also appeared to wave goodbye and blow a kiss at Padres star Manny Machado, who shouted curses back from afar in a heated verbal exchange that included other Dodgers as well.

Bellinger said it was only the second homer he has robbed in his career — the first in the playoffs.

“Certainly turned out being the difference in the game,” Padres rookie manager Jayce Tingler said. “Tatis squared it up pretty good. For him to go up and rob one there, there’s not much to say.”

Game 3 is Thursday night, and the Dodgers can advance to the NL Championship Series for the fourth time in five seasons. They went to the World Series in 2017 and 2018 before losing in a five-game Division Series to the Washington Nationals last October.

Corey Seager put the NL West champions ahead to stay with his two-run double in the third and scored on the first of Max Muncy’s two RBI singles in the game. Leading off the next inning, Bellinger went after a low pitch and drove it 433 feet to center to make it 4-1.

Kershaw followed up his gem in the clinching game of the first round against Milwaukee with six strikeouts and no walks over six solid innings to get the win. The lefty allowed three runs, including back-to-back solo homers by Machado and Hosmer in the sixth, in his first start near his Texas home in a 13-season career.

After issuing full-count walks with two outs to Tatis and Machado that loaded the bases, Kelly retired Hosmer on a groundout for his first save this postseason. Jansen had allowed two runs in the ninth, on a pinch-hit RBI double by Mitch Moreland before he scored on Trent Grisham’s single.

“Never a doubt — we had it in our hands. That’s how Joe Kelly rolls. Joe likes to make it interesting for us,” Kershaw said.

Zach Davies allowed four runs over five innings, the longest outing by a Padres pitcher in their five games this postseason. The right-hander struck out three without a walk but took the loss.

That came after Mike Clevinger was removed from the Padres’ active roster, meaning he is out until at least the World Series — if San Diego can recover to make it that far, and his elbow feels better.

Three-time NL Cy Young Award winner Kershaw grew up, went to high school and still lives about 25 miles from the Texas Rangers’ new stadium. The Dodgers have played four regular-season series in Arlington since his big league debut in 2008, but none of those matched up with his turn in the rotation.

Kershaw could pitch there more this October, since the NL Championship and World Series will also be played in the $1.2 billion ballpark with a retractable roof that has been open for the NLDS.

In Game 2 of the best-of-three series against Milwaukee last Thursday, Kershaw struck out 13 over eight scoreless innings. Kershaw has a 2.43 career ERA in the regular season, but entered these playoffs after the abbreviated 60-game regular season with a 4.43 ERA in the postseason.

The Padres took a 1-0 lead in the second when Tommy Pham blooped a single just over the infield, and scored when Wil Myers lined a double into the right-center gap.

When the Dodgers went to bat after Bellinger’s catch, Justin Turner had a sacrifice fly and Muncy his second RBI single to make it 6-3.

Jansen was averaging 93-94 mph earlier this season, but rarely got above 90 mph on his 30 pitches (seven fastballs and 23 cutters) in this one. There were 11 pitches of at least 90 mph, only three of them above 92 mph.

“I thought there were some good throws in there. There was a dropped third strike with Grisham and he ended up getting a base hit,” Roberts said. “I’m going to think through it. It was just a lot for (Jansen), 30 pitches to get two outs. I know that he’s disappointed as well. I’ll keep thinking through it.”

The Padres plan to start lefty Adrian Morejon in Game 3. Roberts said he wouldn’t announce a starter until Thursday.