Djokovic’s body acts up at French Open; faces Tsitsipas next

Djokovic’s body acts up at French Open; faces Tsitsipas next 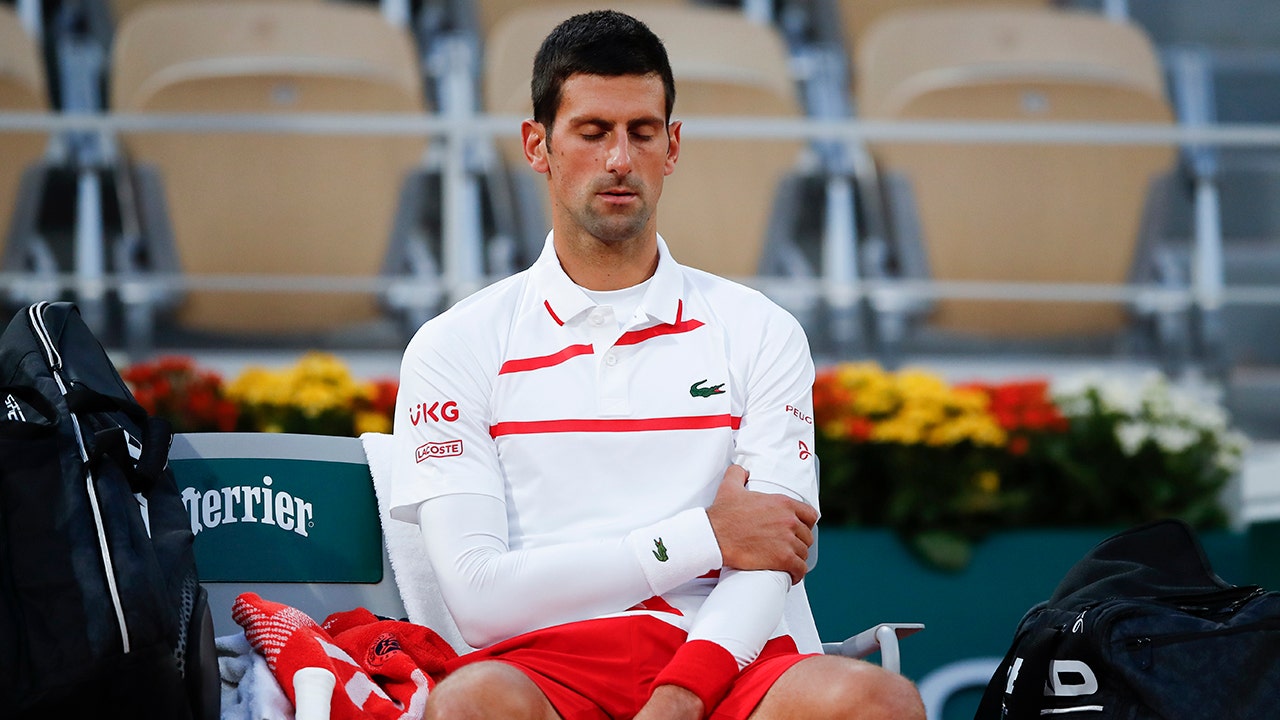 The first obvious sign of trouble for Novak Djokovic came when he stepped out into Court Philippe Chatrier with a rather large square of beige athletic tape on the back of his neck.

The next indication came on the very first point of his French Open quarterfinal against Pablo Carreño Busta, when Djokovic let a ball toss drop and abandoned his serve mid-motion.

Soon enough, Djokovic was flexing and stretching his left arm or hitting it with his racket. Off to a slow start Wednesday night, Djokovic received massages from a trainer, righted himself and beat Carreño Busta 4-6, 6-2, 6-3, 6-4 to reach the semifinals at Roland Garros for the 10th time.

“I definitely didn’t feel great coming into the court today. A few things happened in the warmup,” the No. 1-ranked Djokovic said, without going into specifics.

“I had some neck issues and some shoulder issues. I’ll just say that. I mean, I don’t want to get really too much into it. Obviously I’m still in the tournament, so I don’t want to reveal too much. I’m feeling OK,” said Djokovic, who will face No. 5 Stefanos Tsitsipas in Friday’s semifinals. “As the match progressed, I warmed up my body, and the pain kind of faded away. It allowed me to play better and better and feel better.”

He is right-handed, but the left side is important, too. He uses it for his two-fisted backhand and to throw the ball in the air on serves. Whatever impediment there was to his play, whatever the pain level might have been, the issue was, at the very least, a distraction.

Carreño Busta, for his part, had at least a bit of doubt about what was going on.

“Maybe it’s the pressure or something. … I mean, he continues playing normal, no?” the 17th-seeded Spaniard said. “I don’t know if he’s (in) pain really. … Ask him.”

This was a rematch from the U.S. Open last month, when Djokovic was defaulted for inadvertently hitting a line judge in the throat with a ball he smacked in anger. That went into the books as a loss and remains the only blemish on Djokovic’s 36-1 record in 2020.

Djokovic certainly does seem to have moved past that episode, winning all 10 matches he’s played since.

He hadn’t even ceded a set at Roland Garros until Wednesday. Now he’ll get a day to recuperate as he seeks a second title in Paris and 18th Grand Slam trophy.

No. 2 Rafael Nadal faces No. 12 Diego Schwartzman in the other semifinal Friday. Nadal eyes a 13th championship at the French Open, which would give him 20 majors overall, equaling Roger Federer’s record for men; Schwartzman never has played in a Slam semifinal.

In the women’s semifinals Thursday, it’ll be Sofia Kenin vs. Petra Kvitova, and Iga Swiatek vs. Nadia Podoroska.

Tsitsipas reached his first French Open semifinal with a 7-5, 6-2, 6-3 victory over 13th-seeded Andrey Rublev, taking control after trailing in the first set with a run of five consecutive games, and 11 of 13.

At the U.S. Open, Tsitsipas failed to convert a half-dozen match points in a third-round loss. Then, against Rublev in the final of the clay-court Hamburg Open on Sept. 27 — Day 1 of the French Open — Tsitsipas served for the victory but wound up absorbing another disheartening defeat. Two days later, in Paris, Tsitsipas lost the initial two sets of his first-round match against 109th-ranked Jaume Munar.

But Tsitsipas hasn’t lost a set since.

“I’m chasing something spectacular,” the 22-year-old from Greece said.

He’ll need to get past Djokovic to continue the pursuit.

Against Carreño Busta, Djokovic manipulated his left arm. At changeovers, he rubbed it. He hit himself in the lower part of his biceps with the heel of his right hand. He pushed his left triceps against his sideline seat.

Demonstrative as ever, he smacked himself on his thighs with his racket or hung his head or leaned over with hands on knees after missed shots — and there were plenty of misses. The drop shots so successful for Djokovic all tournament were off-target. Getting serves in was difficult. He was hesitant with groundstrokes.

In the opening set, Djokovic accumulated three double-faults and a whopping 16 unforced errors — accounting for nearly half of Carreño Busta’s 33 points.

At the changeover before the second set, Djokovic was attended to by a trainer, who returned for another massage three games later.

Maybe that did the trick, because from then on, Djokovic was a different player.

He had twice as many winners as unforced errors in the second set. He took nine of 11 games.

“The worst moment of the match for me,” Carreño Busta said.

In the fourth, with the stadium’s new retractable roof open, and a drizzle falling, Djokovic broke to 4-3, and Carreño Busta covered his head with a towel at the changeover.

Still, he didn’t pack it in, earning chances to break back in the next game. Djokovic fended those off and was a game away from winning.

Don’t think Djokovic was entirely at ease, though, even once he was in the lead. He suddenly would turn toward his guest box and bellow — sometimes after negative developments, sometimes after positive ones.

His body, at least, no longer seemed to be a source of frustration.

“It took me about set and a half to really get comfortable and start really playing the way I should,” Djokovic said. “Match turned around quickly.”