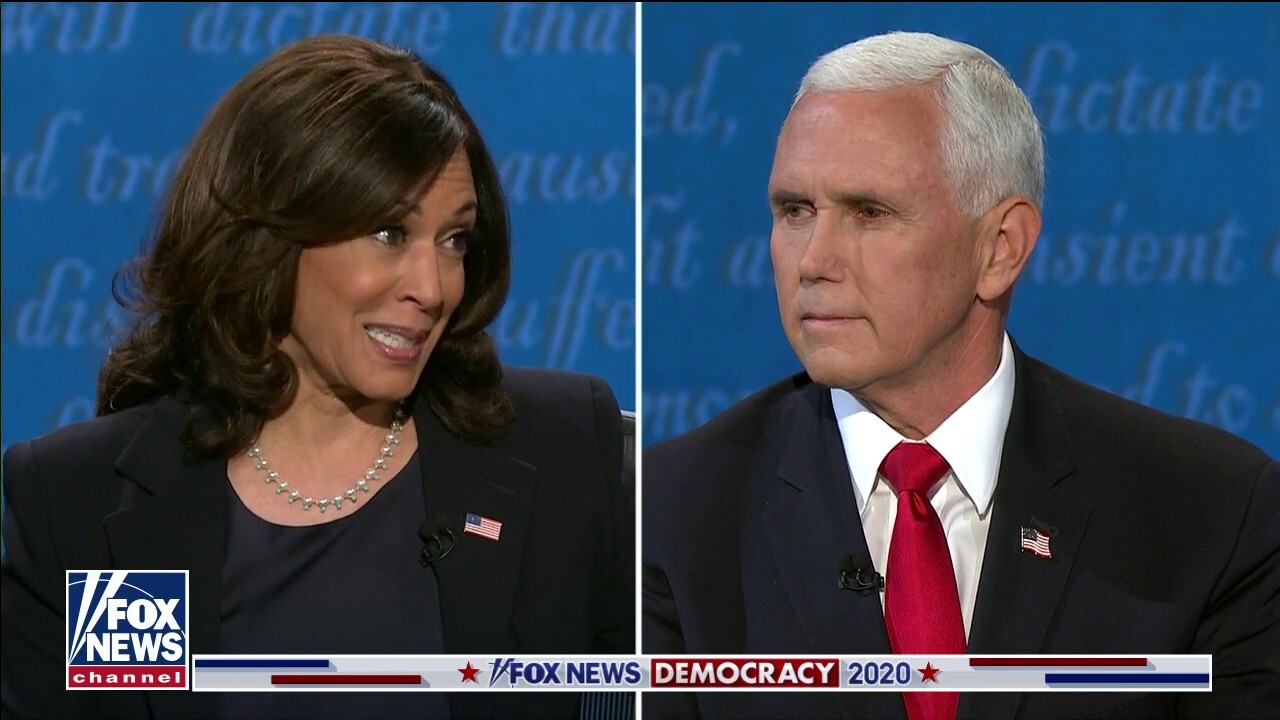 Both the Trump campaign and the Biden campaign claimed victory after Wednesday night’s vice presidential debate at the University of Utah.

During the debate, the president, who is recovering at the White House from the novel coronavirus, tweeted that Pence was “doing GREAT!” and that Harris, D-Calif., was “a gaffe machine.”

Biden also weighed in on Twitter saying: “@KamalaHarris, you made us all proud tonight.”

“@KamalaHarris is showing the American people why I chose her as my running mate,” Biden tweeted during the debate. “She’s smart, she’s experienced, she’s a proven fighter for the middle class. She’ll be an incredible Vice President.”

Meanwhile, the campaigns, both of which held briefings with reporters following the showdown, touted their respective candidates.

Trump campaign senior adviser Jason Miller said that the team “thought this was a resounding victory for Pence.”

Miller, though, slammed Harris, saying she is someone who was “not ready for primetime, and certainly not ready to be president of the United States.”

Miller said that Harris “looked lost on the debate stage,” and spent time looking through her notes and “rambling.”

“Vice President Pence shows he is ready to lead as president if called upon,” Miller said, again slamming Harris as having a “deer in the headlights look.”

“Anyone watching the debate should be very scared,” Miller said. “Scared of Harris becoming vice president and president.”

And Pence chief of staff Marc Short praised the vice president’s performance, saying he “made clear” that four more years of the Trump administration “is the clear choice to continue to rebuild the American economy.”

Short cast Harris as “the most liberal member of the U.S. Senate,” and said “it showed, as she continued to push Joe Biden to the left.”

“President Trump built the world’s best economy once and is already doing it a second time,” Short said. “And as Vice President Pence made clear, President Trump has accomplished more in 47 months than Biden has in 47 years.”

“We are extremely proud of her performance tonight,” Sanders said on a call with reporters. “We think that the American people saw very clearly the choice they have in this election on that debate stage.”

Sanders said there is a choice between Biden, and “the failed leadership over the last four years.”

Sanders slammed Pence, though, saying that he couldn’t “account for the failings of the Trump administration” and used debate time to “mansplain and man dodge.”

“He used the time to evade and lie and talk over Harris and the moderator,” Sanders said, adding that “just because he doesn’t shout, doesn’t mean he doesn’t lie and interrupt.”

Meanwhile, Biden campaign spokesman Andrew Bates likened Pence to a “glass of milk that was left outside for a week.”

The debate was filled with a back-and-forth Pence and Harris traded fire over the Trump administration’s handling of the coronavirus pandemic, the idea of packing the Supreme Court and taxes.

The nominees were significantly more cordial than Trump and Biden were to each other during the first presidential debate last week, though the two clashed several times throughout the night when Pence spoke over Harris.

“Mr. Vice President, I’m speaking. I’m speaking,” Harris said at one point during a discussion on taxes. Pence then shot back: “It’d be important if you said the truth.”

Harris and Pence sat at desks on the stage – separated not only by 12 feet but also by plexiglass – to try to minimize any potential airborne transmission of the virus. Pence and his team initially objected to the barriers, but relented hours before the debate.

Pence, defending the president’s decision not to push for a national mask mandate, said “President Trump and I trust the American people to make choices in the best interests of their health and Joe Biden and Kamala Harris consistently talk about mandates.”

Harris, firing back, said, “you respect the American people when you tell them the truth.”

And she charged the administration was standing on information and “was unwilling to speak the truth to the American people.”

The pandemic has been the leading issue in the presidential race since the outbreak swept the nation in February and March. And with the president’s COVID diagnosis, the issue – as expected – dominated the start of the debate.

Harris was in the spotlight last month when she said she wouldn’t trust Trump when it comes to a coronavirus vaccine after charging he had severely politicized the quest for a vaccine. Asked if she’d take a vaccine approved by the administration, the senator said “if the public health professionals, if Dr. Fauci, if the doctors tell us to take it, I’ll be the first in line to take it. Absolutely. But if Donald Trump tells us that we should take it, I’m not taking it.”

Pence, responding, stressed that the “reality is that we’re going to have a vaccine.. in record time.”

He then argued that “the fact that you continue to undermine public confidence in a vaccine if the vaccine emerges during the Trump administration, I think is unconscionable. Senator, I just ask you, stop playing politics with people’s lives.”

The president has nominated Amy Coney Barrett to the Supreme Court to fill the seat vacated by the death of Justice Ruth Bader Ginsburg. The conservative Barrett, 48, currently serves as a judge on the 7th Circuit U.S. Court of Appeals.

Pence questioned whether a Biden administration would push to add seats to the Supreme Court if Republicans successfully push through the Barrett confirmation ahead of the election.

“This is a classic case of, if you can’t win by the rules, you’re going to change the rules,” Pence said. He then turned to his opponent and asked Harris if she and Biden are “going to pack the Supreme Court to get your way?”

Harris did not answer directly and instead urged the Senate not to push forward with Barrett’s confirmation.

“Joe and I are very clear: The American people are voting right now. And it should be their decision about who will serve on (the Supreme Court) … for a lifetime,” the senator added.

Biden also avoided directly answering the same question at last week’s debate – but was opposed to expanding the high court when asked during the Democratic primaries.

Hours before the two candidates faced off at the University of Utah, a new Fox News national poll indicated Biden widening his advantage over the president. The survey – conducted after last week’s combative presidential debate – which appeared to do Trump no favors – and after the president was hospitalized – indicated Biden leading by 10 points, up from a 5-point advantage last month.

New polling in some of the crucial battleground states also pointed to a post-debate bounce for the former vice president.