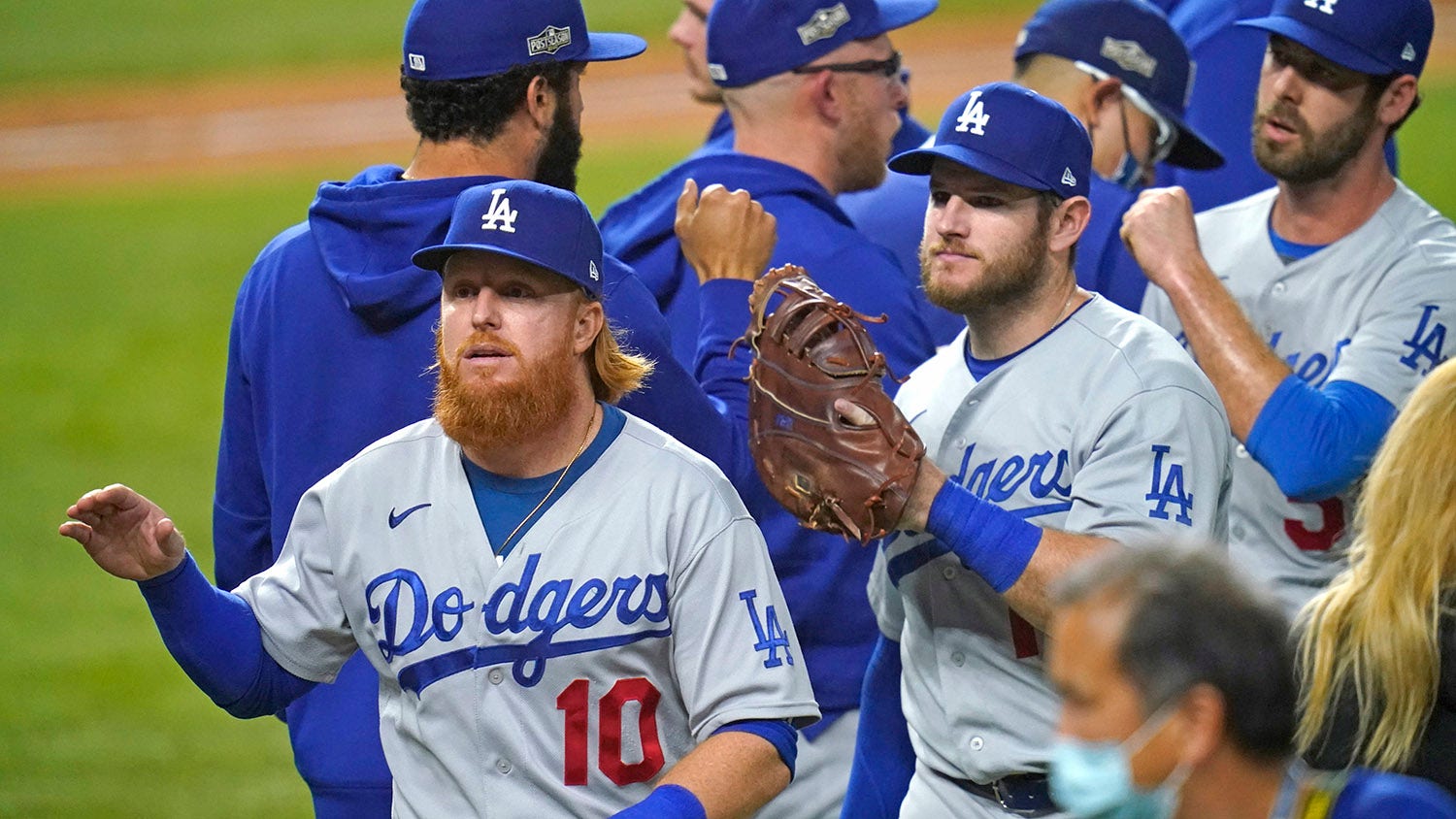 Justin Turner and the Los Angeles Dodgers have completed the first step of what they hope is a long stay in the Lone Star State.

Turner put the Dodgers ahead with a record-breaking hit in a big inning fueled by a nice stop-gone-bad by Fernando Tatis Jr., and they closed out a three-game NL Division Series sweep of the San Diego Padres with an 12-3 win Thursday night.

ASTROS BACK IN THE ALCS MONTHS REMOVED FROM CHEATING-SCANDAL FALLOUT

“Records are cool, championships are better,” said Turner, who was part of the 2017 and 2018 National League championship teams that fell short in the World Series. “Until you’re the last team standing, that’s the ultimate goal.”

Will Smith set a Dodgers postseason record with five hits, and Joc Pederson had a two-run single to cap that decisive five-run third as Los Angeles advanced to its fourth NL Championship Series in five years. The Dodgers lost to the Washington Nationals in a five-game division series last season.

After earning a spot in their 14th NLCS, to match the St. Louis Cardinals for the most, the Dodgers gathered for a team picture on the pitcher’s mound at the same ballpark where the NLCS and World Series will be played.

“We obviously feel really confident about our club, we’ve still got a lot to work to do though,” AJ Pollock said. “We did what we wanted to do, we did what we’re supposed to do. We’re going to celebrate that, but we expected it.”

Turner’s RBI single made it 3-2 and was his 64th career postseason hit, breaking a tie with Steve Garvey for the most in Dodgers postseason history.

That came right after Tatis, the 21-year-old budding superstar, made a diving play on Corey Seager’s hard grounder, but then tried to make a throw from his knee. The ball skipped along the dirt and past first baseman Eric Hosmer, allowing Mookie Betts to score the tying run.

After 2019 NL MVP Cody Bellinger was intentionally walked with two outs after already having a 2-0 count, Pollock drove home Turner with a single, and Pederson lined his single over the outstretched glove of third baseman Manny Machado to make it 6-2.

Smith delivered an RBI single in the fourth and a two-run double in the ninth off the 11th Padres pitcher — a postseason record. Betts, a day after his 28th birthday and signed for 12 more years, scored three times and had a sacrifice fly.

“Our offense was great. We had big plays, big moments from a lot of different guys throughout the series,” Pollock said.

The Dodgers open the best-of-seven NLCS on Monday in the Texas Rangers’ new $1.2 billion stadium with a retractable roof. They face Atlanta with fans in attendance for the first time during this pandemic-altered season.

Julio Urias (2-0), the third Dodgers pitcher, struck out six, walked one and allowed an unearned run over his five innings.

Garvey went to three World Series with the Dodgers and was part of their 1981 title. Three years later, he was with the Padres for their first World Series appearance.

Tatis, Machado and these Padres, who got only one inning out of injured Mike Clevinger this postseason and were also without their other top starter Dinelson Lamet, will have to wait until next season for another chance to overtake the Dodgers.

“They outplayed us. They played better baseball than we did,” Tatis said. “We’ve just got to learn. This is just getting started.”

The Padres loaded the bases in the bottom of the second, but there would be no more grand slams — not like in the four games in a row they hit those against the Rangers, including their only two previous games at Globe Life Field. That slam streak was part of seven wins in a row that pushed San Diego into second place in the NL West, where it stayed and finished six games behind the Dodgers.

“Their pitching staff over there was really good,” Padres rookie manager Jayce Tingler said. “We had a couple of opportunities to strike when we had some baserunners on. It seems like when we got to those positions, that’s when their guys beared down and made some pitches.”

San Diego did take a 2-1 lead, on rookie Jake Croneworth’s walk after Wil Myers was intentionally walked to load the bases with two outs, and Trent Grisham’s RBI single before Tatis struck out.

The Padres’ 11 pitchers were a record for any postseason game. They had matched the previous record of nine already three times — in Games 2 and 3 of the NL wild-card round against St. Louis and the NLDS opener. It added up to 51 different pitching appearances in six playoff games. The Padres used 24 total players Thursday, the most ever in any playoff game.

“We knew we were short-handed, just not being at full throttle with all of our pitchers,” Tingler said. “But the one thing our guys did, they laid it out there. They gave it everything they had.”

Dodgers starter Dustin May, the 23-year-old right-hander grew up about 30 miles away in Justin, Texas, threw more balls than strikes (9-7) in the first inning. But five of those pitches were at least 100 mph and he faced only three batters since Tatis was caught stealing when he overslid the base after drawing a one-out walk. May won the NLDS opener with two perfect innings.

Turner had matched Garvey with his RBI single in Game 2 on Tuesday night, and later added a sacrifice fly. Turner’s 37 RBIs are also a franchise record in the postseason. In 59 postseason games, the Southern California native has hit .294 (64 for 218) with nine homers.

Dodgers: Their fourth postseason series against Atlanta, which swept Miami in the other NLDS played about four hours away in Houston. Their first three playoff meetings were in the NLDS, with Atlanta sweeping the Dodgers in 1996, and Los Angeles winning in four games in 2013 and 2018. The Dodgers also swept the Milwaukee Braves in the 1959 NL tiebreaker playoff.