She has been embracing the Halloween spirit as she dressed up as a nurse for the spooky celebration earlier this week.

And Madison Beer hit the town for her second Halloween night out on Saturday with her friend Isabella Jones in West Hollywood.

The singer, 21, put on a leggy display and revealed her washboard abs as she headed out for dinner at Craig’s with her model friend. 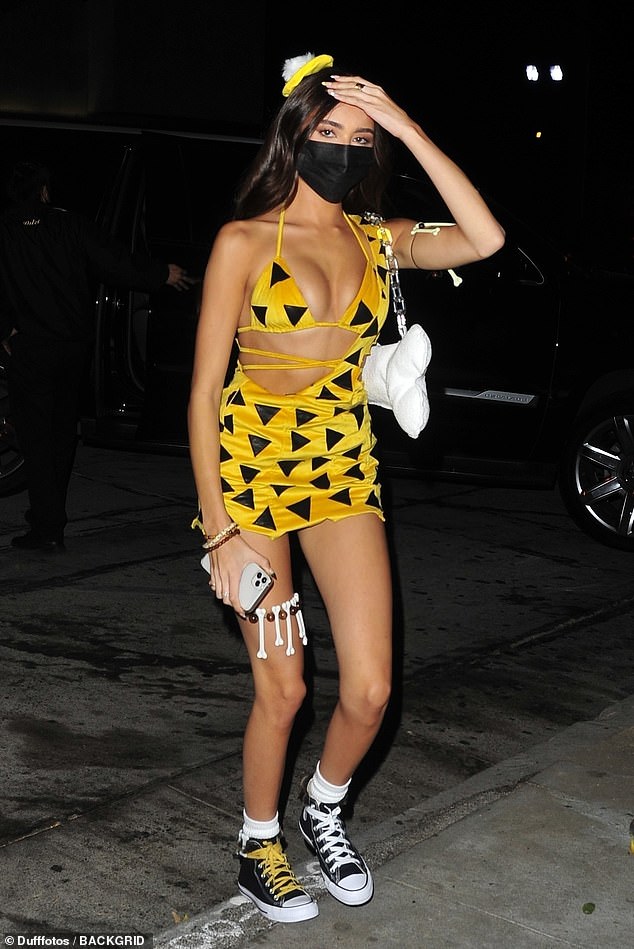 Fancy dress: Madison Beer headed out for dinner at West Hollywood’s Craig’s dressed as Bamm-Bamm Rubble from The Flintstones with her friend Isabella Jones on Saturday night

The duo twinned as they stylishly dressed up as two characters from The Flintstones cartoon franchise, Bamm-Bamm Rubble and Pebble Flintstone.

But Madison added a racy touch to her Halloween attire, showing off her cleavage in a yellow and black halter-neck bra and a matching one-shouldered bodycon dress.

She nailed The Flintstones look with a bone garter fastened around her thigh, flaunting her toned pegs.

The musician complimented her fancy-dress costume with a giant bone handbag and brown beaded bracelets. 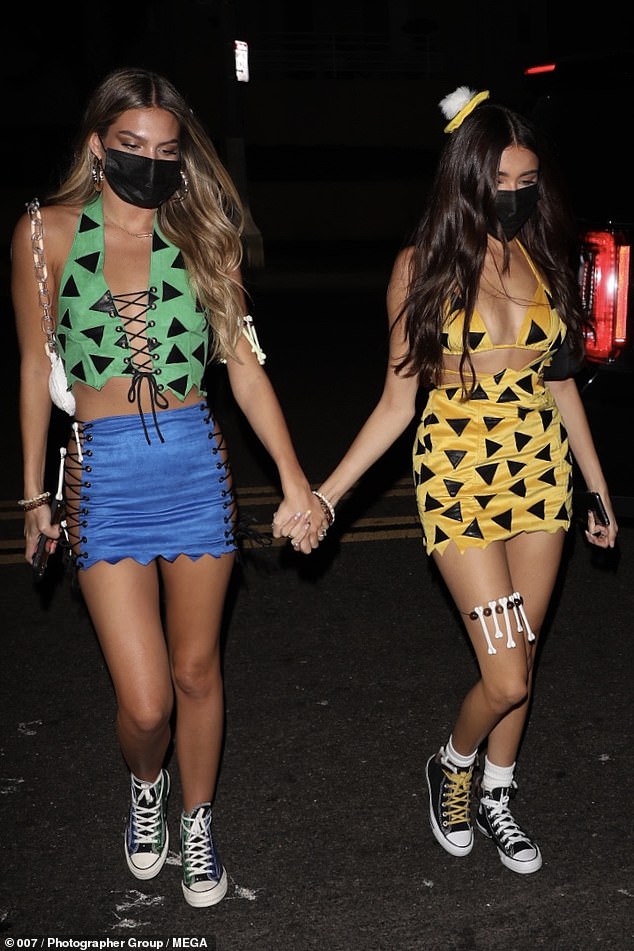 Twinning: The singer, 21, and her model friend wore matching Flintstone-themed Halloween outfits, holding hands as they strutted through West Hollywood

She wore her brunette tresses naturally cascading down her back, with a small yellow bobble hat pinned into her wavy locks.

Madison opted for a soft make-up look, instead allowing her statement ensemble to do all the talking.

She took inspiration from Madison’s look with her bone-themed accessories and both women paired their outfits with a comfortable pair of Converses. 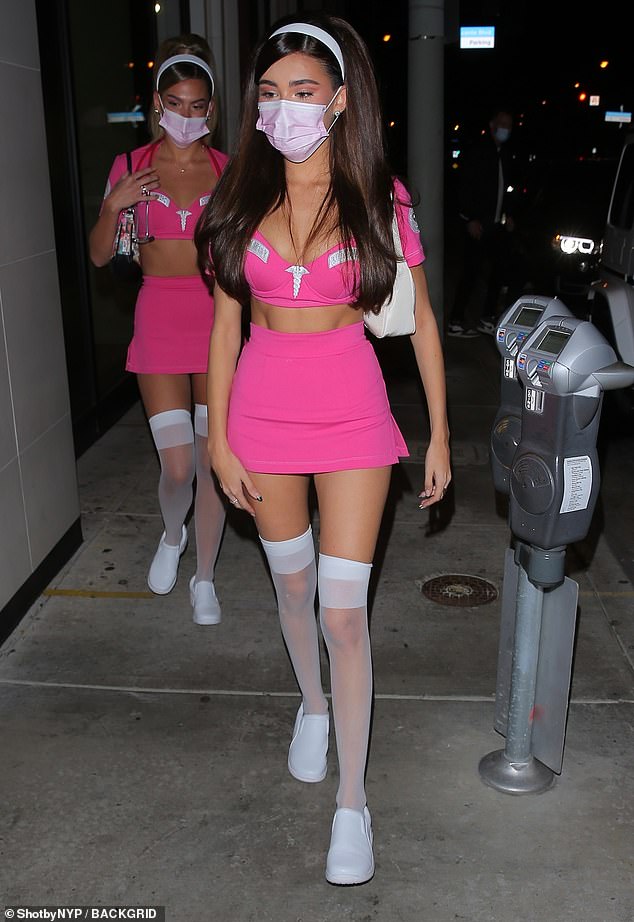 Costume: It is not the first time the duo have hit the town for the spooky October celebration this year, as they both headed to Catch restaurant in full Halloween garb on Friday night

The two pals made sure to keep themselves protected by sporting black face masks, adhering to coronavirus safety regulations.

And it is not the first time the duo have hit the town for the October celebration this year, as they both headed to Catch restaurant in full Halloween garb on Friday.

Madison and Isabella both wore vibrant pink nurses outfits while sauntering through West Hollywood at the start of the spooky weekend.

Madison’s fuchsia co-ord featured a bralette and bolero, decorated with a caduceus symbol at the bust and a hospital badge.

It complemented her tiny mini skirt and semi-sheer stockings, while she nailed the nurse look in a pair of comfortable plimsolls. 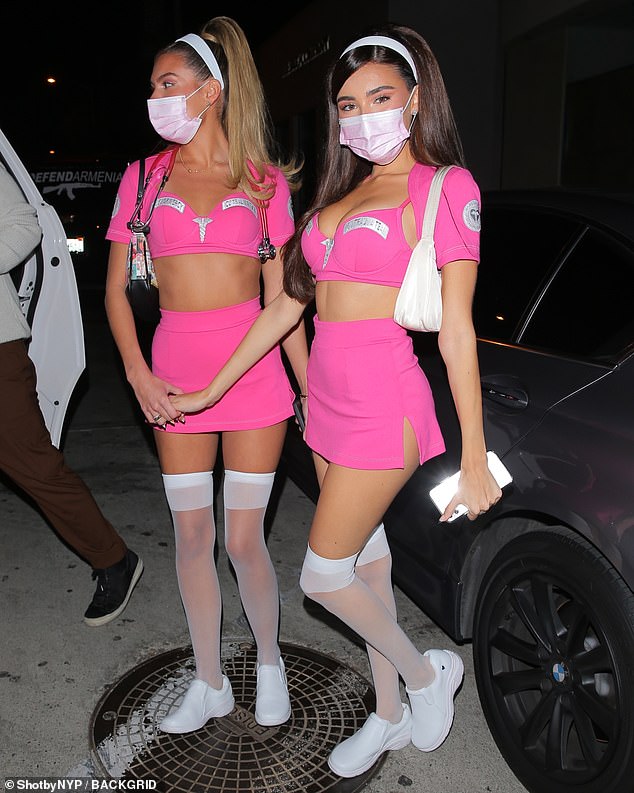 Pretty in pink: Madison displayed her slender pins and washboard stomach in a vibrant trauma nurse Halloween outfit at the start of the spooky weekend

Madison completed the look with a cream shoulder bag and a baby pink face mask.

Isabella took her matching ensemble a step further, as she sported a stethoscope draped around her shoulders.

In recent weeks, Madison has sparked dating rumours as she has been spotted out-and-about with TikTok star Nick Austin.

She and Nick, 20, were first linked in August after they were spotted having dinner together and packed on the PDA.

Madison initially rose to fame in 2012 when Justin Bieber shared a song she covered on YouTube when she was just 13. 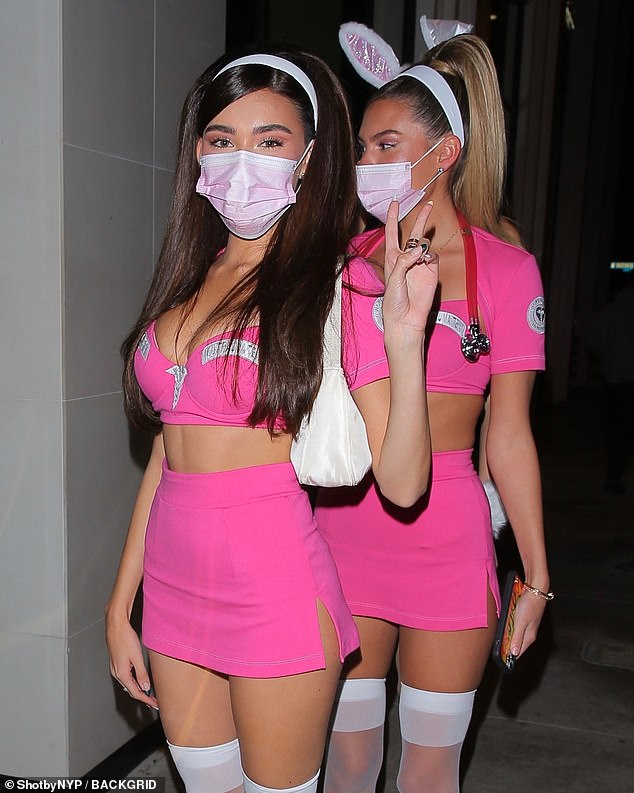 Revealing! Her fuchsia co-ord costume featured a bralette and a bolero decorated with a caduceus symbol and a hospital badge which complimented her tiny mini skirt

The massive attention helped her land a recording contract with Island Records and led to the release of her debut EP, As She Pleases, in early 2018.

This year, the pop-star is set to release her debut full-length album Life Support.

But Madison has not yet announced an official release date for the album, leaving her fans in suspense.

She has dropped four singles ahead of the album’s release since January, including the tracks Good In Goodbye, Selfish, Stained Glass and Baby. 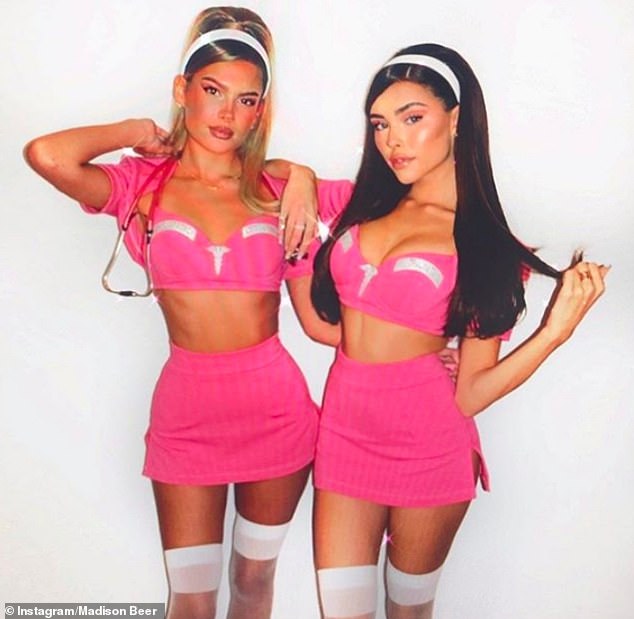 Halloween: Madison completed the look with a cream shoulder bag and a baby pink face mask, while Isabella accessorised with a matching stethoscope