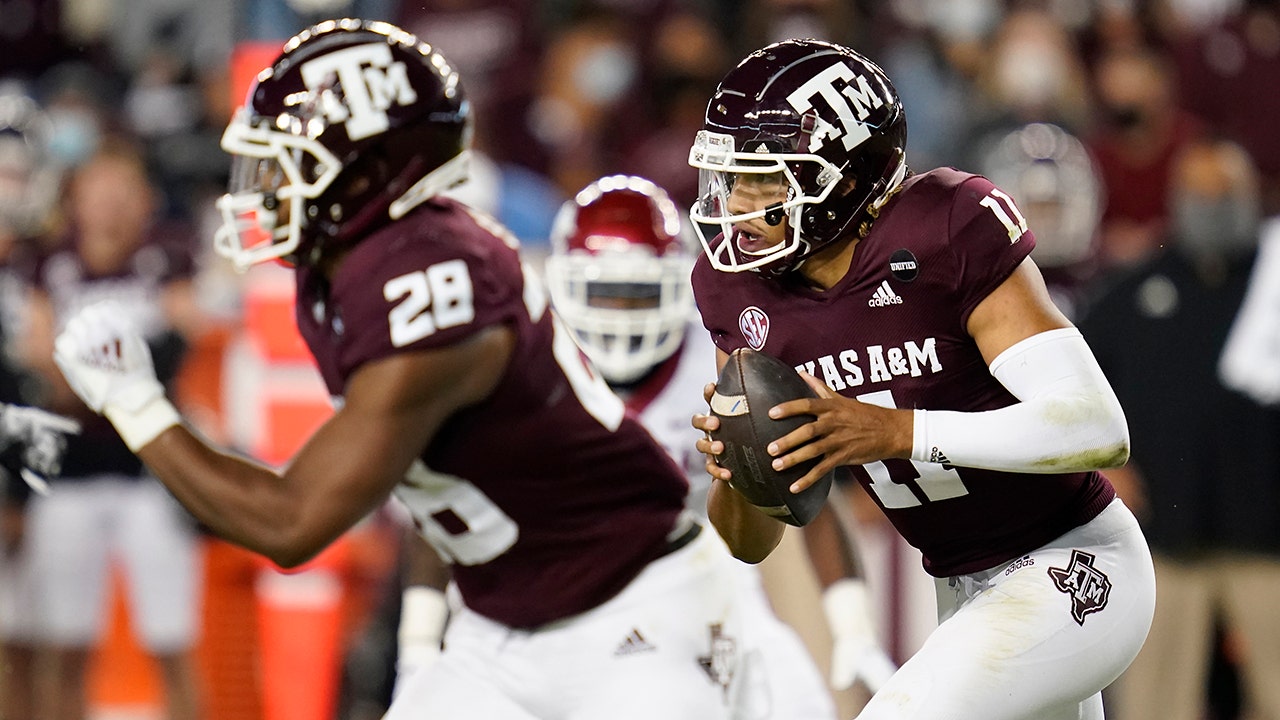 Coach Jimbo Fisher was asked if he was disappointed in anything from No. 8 Texas A&M‘s convincing win over Arkansas.

“Yeah, we didn’t win 80-0,” he said. “I’m not joking about that. I’m always frustrated if we don’t score every time and we don’t stop them every time.”

Kellen Mond threw for 260 yards and three touchdowns as Texas A&M built a big lead and held on for the 42-31 victory on Saturday night, extending its winning streak over the Razorbacks to nine games.

Jalen Wydermyer had a career-high 92 yards receiving with two touchdowns. Ainias Smith ran for a touchdown and caught a TD pass in the first half to help A&M win its third straight since losing to No. 2 Alabama.

Fisher’s players echoed his sentiments about striving for perfection each week.

“We can definitely elevate,” Smith said. “There’s never a time where we’re actually playing to our full potential.”

Mond threw TD passes of 35, 6 and 15 yards. The senior added 32 yards rushing to give him 10,015 yards of total offense in his career, passing 2012 Heisman Trophy winner Johnny Manziel (9,989), who played just two seasons, for the most in school history.

Mond faced some criticism after A&M’s 52-24 loss to the Crimson Tide, but Fisher said he never doubted his quarterback.

Mond has been around long enough to know how difficult it is to win in the Southeastern Conference, but he also knows the Aggies can do more.

“An SEC win is always going to be a big win for us but we’re never going to be satisfied,” he said.

The Aggies (4-1) led by 14 at halftime and scored two touchdowns in the third quarter while limiting the Razorbacks (2-3) to a field goal to make it 42-17 entering the fourth quarter.

Arkansas scored two touchdowns in the fourth quarter on a reception by Treylon Burks and 14-yard run by Rakeem Boyd, but the deficit was too big to overcome.

“They converted almost every third down until the last two or three drives of the game,” Arkansas coach Sam Pittman said. “It was just hard to get them off the field.”

Franks threw for 239 yards and three touchdowns and ran for a career-best 91 yards for Arkansas. Burks had 117 yards receiving and two scores.

“We’re doing OK,” Franks said. “I say that as an ultimate competitor because I love to win. Continuing to get better is the most important thing.”

Pittman was disappointed that his team didn’t take advantage of its scoring opportunities early.

“We left points out there,” he said. “We drove the ball in between the red zones pretty good and we’d get down there and stop ourselves or they’d make a good play, a penalty or whatever it may be.”

Arkansas entered the game leading the country with 10 interceptions after grabbing six in its last game against Ole Miss. But the Razorbacks couldn’t force any turnovers on Saturday and remained winless against the Aggies since 2011.

It was the first campus meeting between these teams since a game at Arkansas in 2013 after they played the last six games at AT&T Stadium in Arlington, Texas.

A.J. Reed made a 34-yard field goal in the third quarter to cut the Aggies’ lead to 28-17 after missing two longer tries in the first half.

Mond’s second touchdown throw to Wydermyer made it 35-17 with about 5 1/2 minutes left in the third. Freshman Devon Achane’s 30-yard run later in the third pushed the lead to 25 points.

Burks put Arkansas up early when he grabbed a 6-yard TD pass on the team’s first possession.

The Aggies tied it when Smith scored on a 35-yard reception later in the first quarter.

Smith got into the end zone again on A&M’s next possession, this time running 15 yards for the score to make it 14-7 late in the first quarter.

Freshman safety Jalen Catalon was ejected for targeting on that drive after a helmet-to-helmet hit on Chase Lane after a 15-yard reception.

Mond’s second TD pass was on a 6-yard reception by Wydermyer, which extended the lead to 21-7 about seven minutes before halftime.

Tyson Morris got the Razorbacks within seven with a 1-yard touchdown catch later in the second quarter. Burks had a 36-yard reception on fourth-and-2 two plays earlier to keep the drive alive.

Texas A&M made it 28-14 with a 16-yard scoring run by Isaiah Spiller with about a minute left in the first half.

Mond and the Aggies looked sharp from the start and appear to be improving each week as they try to hold onto second place behind undefeated Alabama in the SEC West. They’ll look to close games better after allowing the Razorbacks to cut into the lead late.

The Aggies could move up a spot or two in the poll after No. 6 Oklahoma State’s overtime loss to Texas on Saturday.

Texas A&M’s offensive line hasn’t allowed a sack in the last four games. The last time Mond was sacked was in the second quarter of the team’s season-opener against Vanderbilt. He’s had 144 straight pass attempts without being sacked.