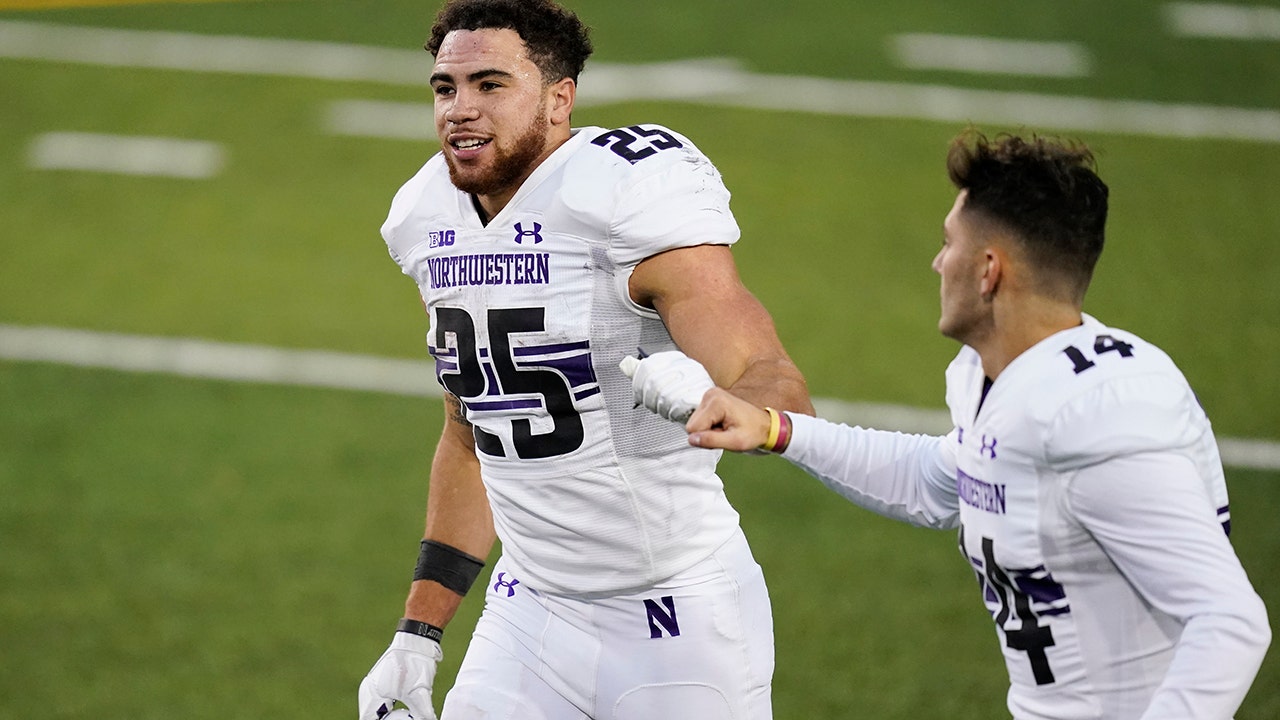 Jesse Brown scored the go-ahead touchdown on a 2-yard run in the third quarter, and Northwestern erased an early 17-point deficit to beat Iowa 21-20 on Saturday.

The Wildcats outscored the Hawkeyes 21-3 after the first quarter, eating up clock and keeping Iowa’s offense out of rhythm.

“We knew going into this game it would be a four-quarter fight,” Northwestern quarterback Peyton Ramsey said. “We knew it wasn’t over. We knew we had a lot of football left to go and just had to regain some momentum.”

Spencer Petras threw all three of his interceptions in the second half, the last one on a tipped ball that linebacker Blake Gallagher picked off, allowing Northwestern to go into victory formation.

Iowa’s 17-0 first-quarter lead came after Northwestern gifted the Hawkeyes (0-2) with two turnovers — a muffed punt inside the 5-yard line and a fumble near midfield.

“I usually don’t bring the squad up at the end of the first quarter… It was more of just ‘Settle down and settle in, let’s go,’ “ Northwestern coach Pat Fitzgerald said. ”This is going to be a four-quarter game. You don’t lose a game after one quarter. Games are won in the fourth quarter.”

And that’s exactly when Northwestern’s defense flexed its muscles, forcing Iowa to turn over the ball on downs in between two interceptions.

“Spencer is a two-game quarterback right now,” Iowa coach Kirk Ferentz said. “He’s a very young guy. This was not a fun experience or a great experience in the second half. But he’ll grow from this. He’ll get back on his feet.”

Kyric McGowan scored on a 3-yard run and Brown scored from the 1 to pull the Wildcats within 20-14.

Iowa punted three times, had three passes intercepted and turned the ball over on downs on seven second-half possessions that netted a total of 104 yards.

Northwestern: The Wildcat defense is better than advertised, especially against the run. For the second straight week, Northwestern held its opponent to fewer than 80 rushing yards. Aside from the two touchdown drives by Iowa (both coming off turnovers and excellent field position), the Hawkeyes couldn’t string together much of anything against the Wildcats.

Iowa: For the second straight week, Iowa struggled to find consistency on offense. Petras completed 26 of his 50 passes for 216 yards, one touchdown, and three interceptions. There wasn’t much help from the ground game as the Hawkeyes averaged just 3.3 yards per carry.

“They disguised things really well,” Petras said. “They play a lot of eight-man coverages where they’re forcing you to earn it all the way down the field.”

NIXON’S GOT THE KNACK

Nixon was all over the field. The junior had 11 tackles, including three for loss, and 1.5 sacks.

Last week against Purdue, Nixon registered seven tackles, including 2.5 for loss, and half a sack.

Bowser ran for 165 yards and a touchdown the last time Northwestern played in Iowa City. On Saturday, the tailback finished with 80 fewer yards than his 2018 performance, but he helped fuel the balanced Wildcat attack.

“All props to him,” Iowa defensive lineman Zach VanValkenburg said. “He’s a fast back. He runs hard. He’s a good running back and we need to do a lot better job against that.”

Kinnick Stadium was nearly empty, but after the first quarter, players’ family members and both teams turned to the University of Iowa Stead Family Children’s Hospital and waved, continuing the tradition that started in 2017.

“(The wave) is one of the best traditions in college football,” Fitzgerald said.