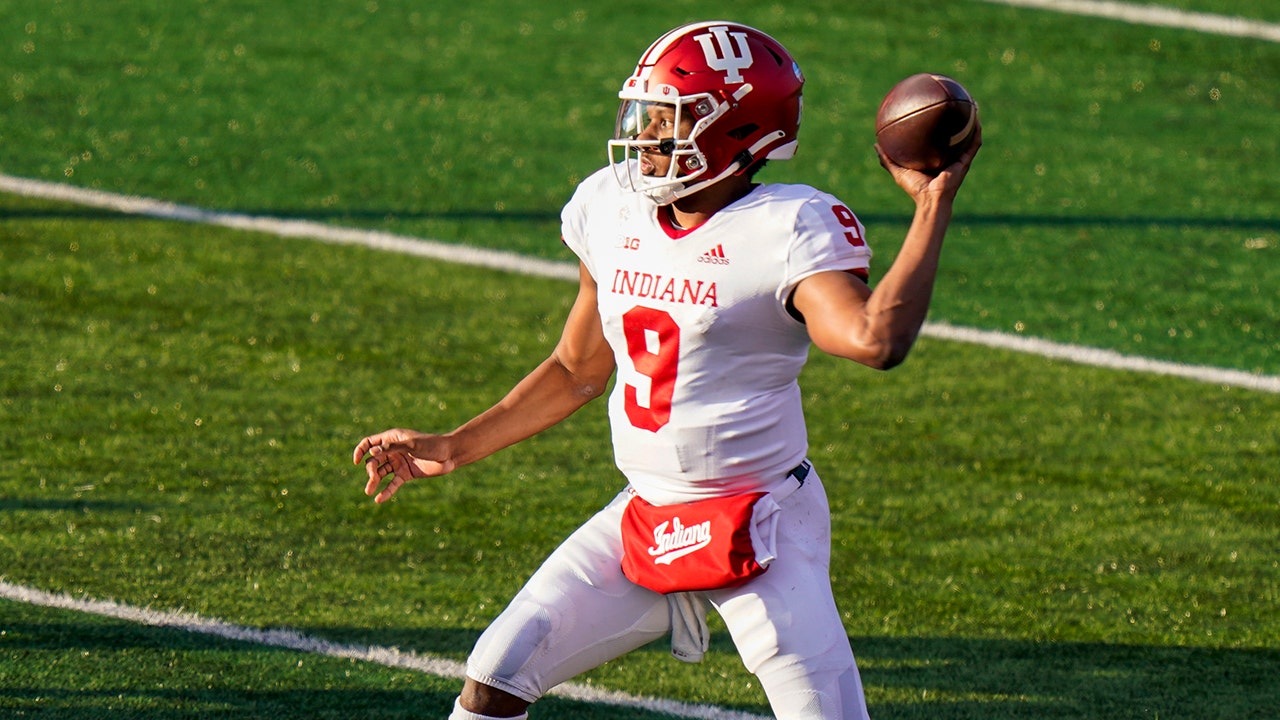 Michael Penix Jr. came through for Indiana again. So did the defense — no need to count the wild play that got called back.

It seems the 17th-ranked Hoosiers have a chance to be the surprise of the Big Ten Conference this season.

Penix had three touchdown tosses and ran for another score and the Hoosiers intercepted three passes and limited Rutgers to 248 yards in a 37-21 win Saturday that almost included a crazy TD.

.Penix threw TD passes of 15, 2 and 1 yard. He also scored on a quarterback sneak as the Hoosiers (2-0, 2-0 Big Ten) followed up their stunning win over then-No. 8 Penn State last week.

The 2-0 start is their first in the conference since 1991 and just might mean Indiana is that good this season.

The Hoosiers’ win will last but people may always remember the Stanford band-like play Rutgers almost scored on with less than two minutes to go.

On fourth-and-32, Rutgers seemed to score on a 55-yard play that involved eight laterals. After a review, however, it was ruled that receiver Shameen Jones’ pitch was an illegal forward pass, spoiling a wild celebration for the Scarlet Knights.

Ty Fryfogel caught the 15-yard TD pass just 1:43 after Penix scored, giving the Hoosiers a 20-7 halftime lead. Hendershot got his TDs in the second half and Charles Campbell added three field goals.

Noah Vedral threw a 23-yard touchdown pass to Bo Melton and Kay’Ron Adams scored on a 37-yard run for Rutgers (1-1, 1-1). The game was Greg Schiano’s at home since starting his second stint as coach with a win at Michigan State last week.

“Disappointing. We had our opportunities,” Schiano said. “There certainly wasn’t one ounce of giving in. We’ll build this thing the right way. I believe in our guys. They stuck to the plan throughout. Certainly, it’s disappointing.”

Vedral finished 22 of 35 for 128 yards and threw three interceptions. He was sacks four times and was hit a lot more.

The Indiana defense turned the game in the second quarter when defensive lineman Jonathan King and cornerback Jaylin Williams had interceptions on consecutive passes by Vedral deep in Scarlet Knights’ territory.

“We need to continue and not let this get to our head,” said linebacker Micah McFadden, who had the other pick. “We need to keep our voice humbled and keep making plays.”

With the win, the Hoosiers snapped a 10-game losing streak in games that came after they beat a ranked opponent, a drought dating to October 1987.

On the wild play lateral play, Vedral hit Jones on a short slant. He was hit by defenders and lateraled the ball to Melton, who flipped it back to Vedral. As he was being hit, he lateraled to tackle Raiqwon O’Neal. The ball fell to the turf and bounced back to him and he was quickly surrounded. Before going down he heaved the ball over his head back to around the 18-yard line, where he was caught Jones again. He started running upfield and was hit. While falling to the gound he tossed it to guard Sam Vretman — that was the forward pass.

Vretman flipped the ball to Aaron Young, who found Vederal 15 yards in front of the Indiana bench. He quickly tosses a lateral across the field toward the Rutgers sideline. Melton caught it with an escort and scored, sending the Scarlet Knights bench into a towel waving frenzy. A review ended it.

“It was insane,” McFadden said. “When I saw that guy running down the sideline I couldn’t believe it. Everyone of the field was dog tired. It was a 30-second play. It was unbelievable they were able to keep getting those lateral passes back. Obviously we were happy once the final call came.”

Schiano said Rutgers practices that play, as do all teams.

“It never plays out the same,” he said. “The beginning of it starts the same, but who knows where it goes from the pitch-fest, right?”

Indiana: If Penix can stay healthy and Indiana’s defense plays the way it did against Rutgers, the Hoosiers might be the surprise of the Big Ten this season.

Rutgers: The Scarlet Knights’ defense can keep them in games. The offense took a big step back. The line didn’t open any holes and allowed too much pressure in passing situation.

Indiana returns home to play No. 13 Michigan on Saturday.

Rutgers at No. 3 Ohio State on Saturday.