Emily Ratajkowski recently revealed that she was expecting her first child with her producer husband of two years Sebastian Bear McClard.

On Saturday, the duo dressed in costumes for a quick a Halloween stroll in New York with their dog Colombo.

Opting for an off the cuff look, 29-year-old Emily stepped out as Demi Moore after re-creating the veteran actresses iconic pregnancy shoot for Vanity Fair. 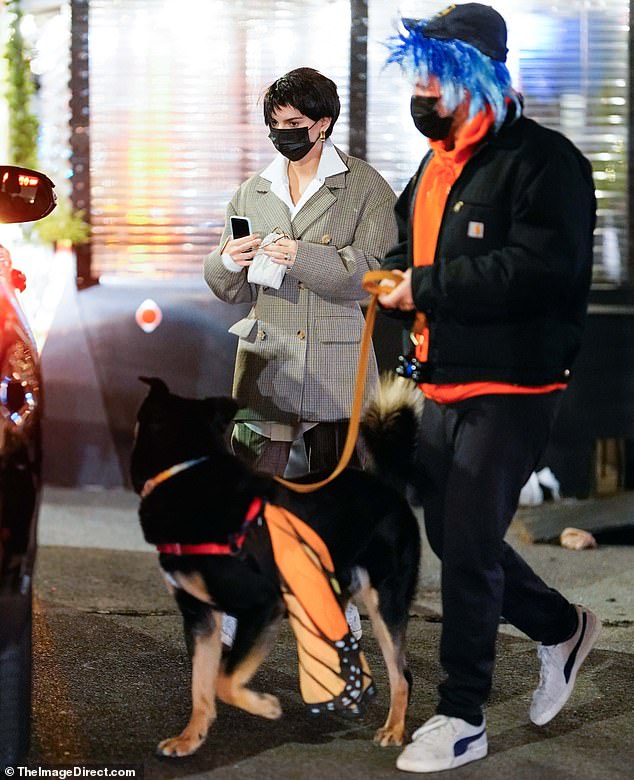 City stroll: Emily Ratajkowski, 29, stepped out as Demi Moore during a stroll with husband Sebastian in New York

For the low key Halloween outing, Emily ditched the lingerie from her earlier photoshoot and rocked a plaid suit.

Hiding her famous figure and budding belly, she layered up in an oversized blazer and matching pants, which she threw over a classic white blouse.

She rocked Demi’s 1991 pixie cut, throwing on a wig over her long brown locks to get into character.

The expecting mom kept it safe in a black face mask as she walked around her NoHo neighborhood. 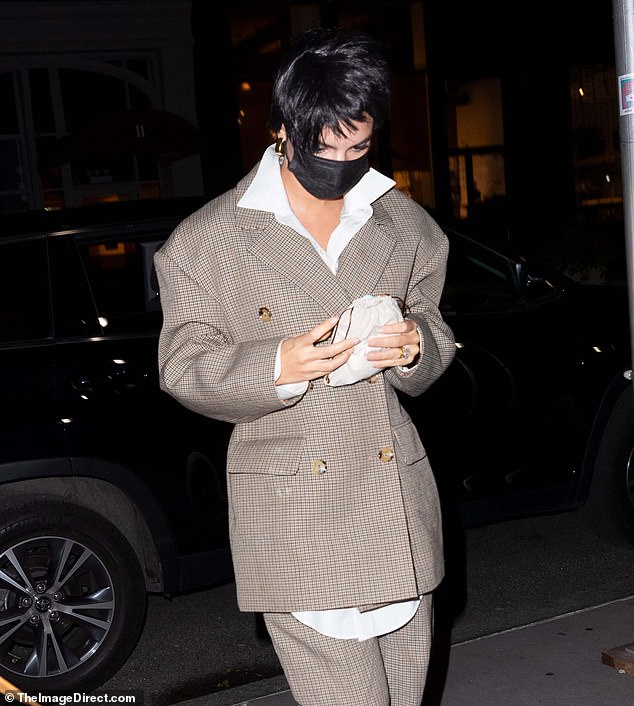 Suited up: Ditching the lingerie from her earlier photoshoot, Emily threw on a plaid suit over her white blouse 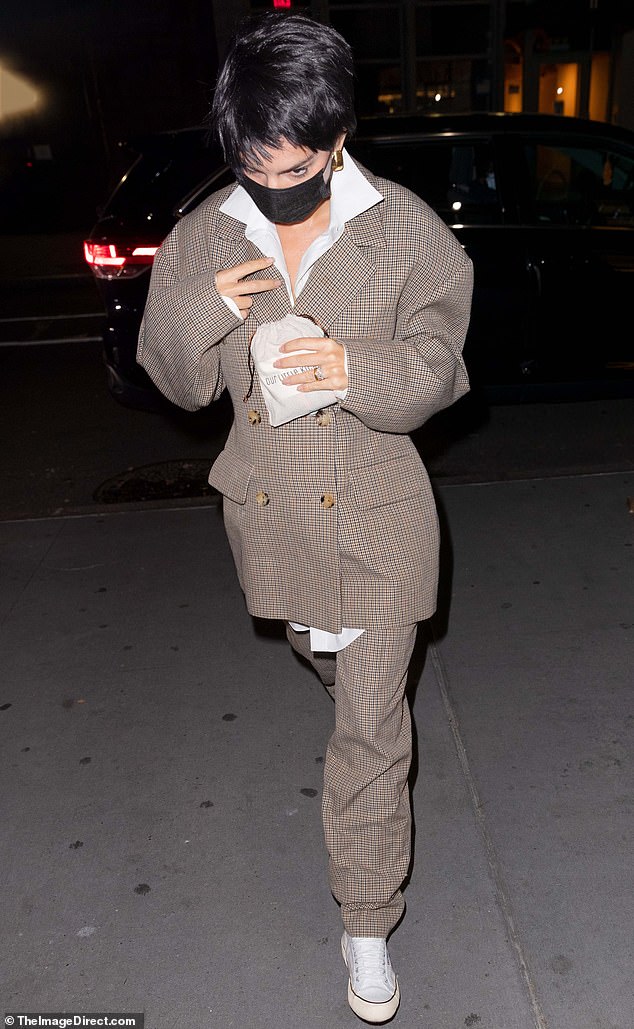 She opted for comfort, throwing on a pair of white Converse as she flashed her gorgeous double stone engagement ring while clasping a small bag.

Sebastian had a less clear costume, as he threw on a blue wig under his baseball hat, while rocking black and orange.

Their puppy Colombo also got in on the fun as the couple dressed him up like a Monarch butterfly.

Earlier in the evening, Emily posted to social media as she tried her hand at Demi’s pregnancy cover shoot which was shot by Annie Leibovitz.

She donned just lacy black lingerie as she slung a white shirt off her shoulders and gently cradled her bare bump, in an homage. 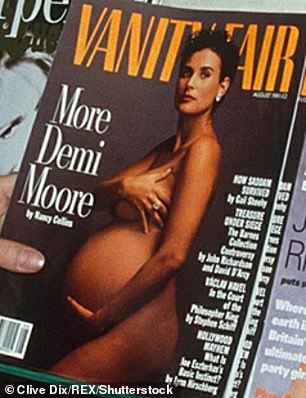 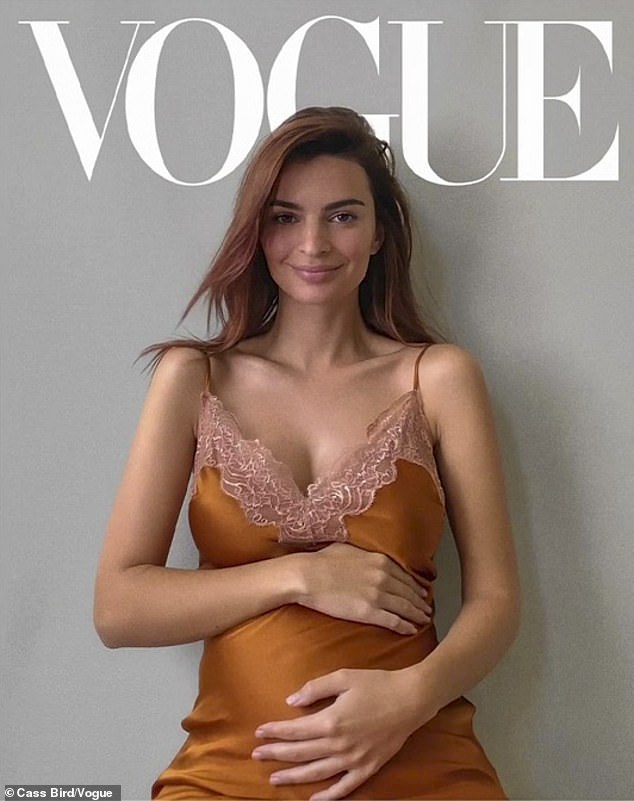 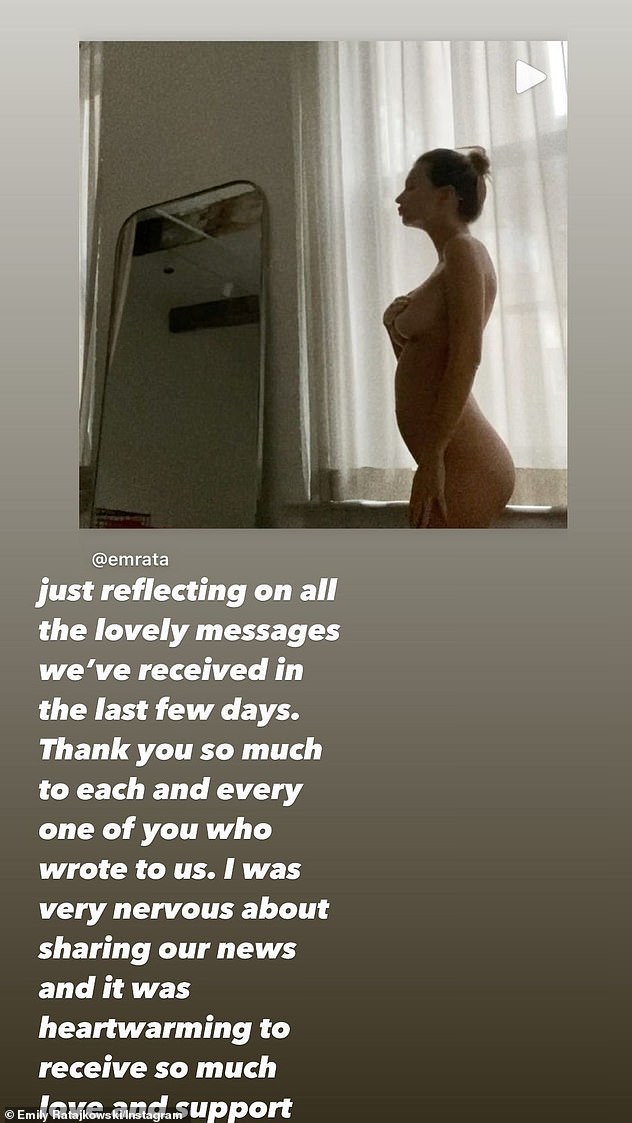 The rent-dodging Tribeca couple are also ‘parents’ to their ’80 lb’ German Shepherd Columbo, whom they adopted on May 11, 2019. 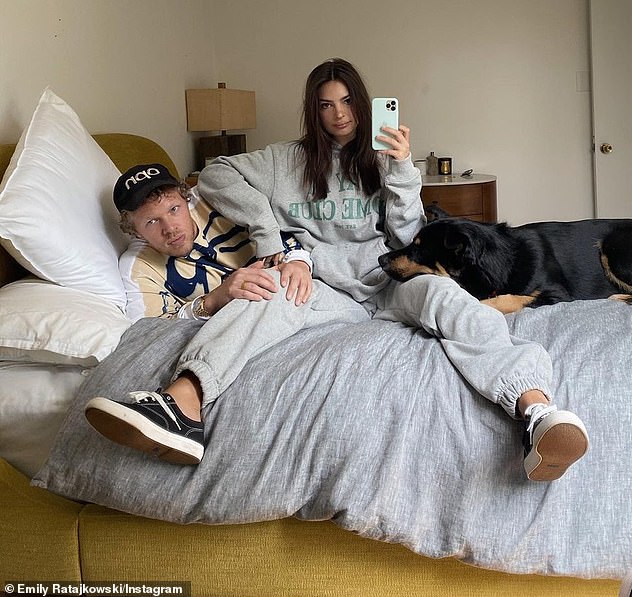 Fur baby: The rent-dodging Tribeca couple are also ‘parents’ to their ’80 lb’ German Shepherd Columbo, whom they adopted on May 11, 2019 (pictured May 10)