Rhamondre Stevenson has 3 TDs in return for No. 24 Oklahoma

Rhamondre Stevenson has 3 TDs in return for No. 24 Oklahoma 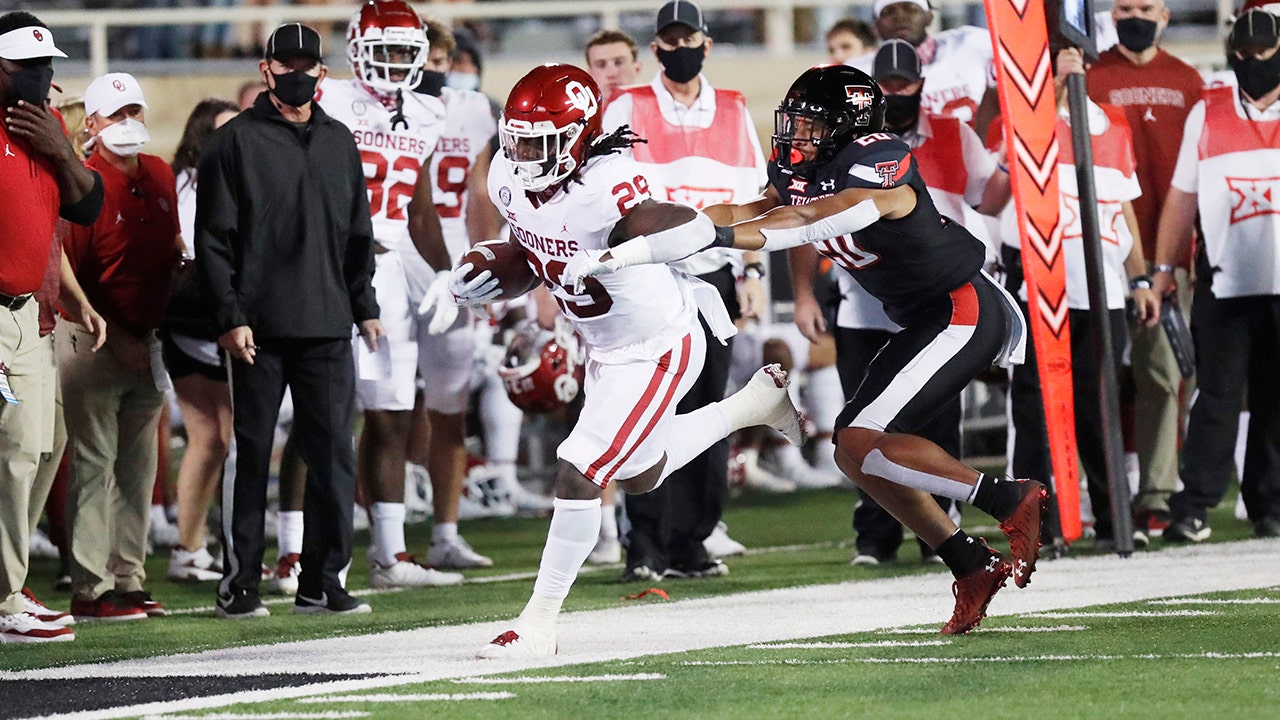 The room erupted during Oklahoma’s team meeting when finding out that running back Rhamondre Stevenson and defensive end Ronnie Perkins had been cleared for their season debuts.

After not playing since the Big 12 championship game last December, Stevenson and Perkins didn’t disappoint in the No. 24 Sooners’ 62-28 win at Texas Tech on Saturday night.

“We were extremely excited, we all got chills, super happy for them,” quarterback Spencer Rattler said about the team finding out late Friday that Stevenson and Perkins would be able to play. “We knew they would come out and do us justice. They both did a great job.”

Stevenson ran for three first-half touchdowns, while Rattler threw for 288 yards and two scores in about 2 1/2 quarters. Perkins had three tackles, two for losses. Neither Stevenson or Perkins has played since being suspended before the Peach Bowl last season.

“They both had a big impact,” coach Lincoln Riley said. “We had to kind of scramble a plan up, and didn’t want to overdo it on them. But they’re two mentally locked-in kids. They’ve been preparing hard. … Those guys played some ball, so that certainly helps.”

“I give our team a lot of credit. There was some momentum early in this football game when they scored and got a stop on us,” Riley said. “And we really hit the gas there and played some really quality football.”

Rattler was 21-of-30 passing before backup Tanner Mordecai took over midway through the third quarter with the Red Raiders up 55-14, and freshman Chandler Morris got some late snaps. Theo Wease had five catches for 105 yards, while Austin Stogner and Jeremiah Hall had TD catches.

Henry Colombi, the former Utah State transfer quarterback, was 15 of 28 for 227 yards with two touchdowns and two interceptions in his second start for the Red Raiders. He was 3 for 3 for 36 yards and had an 11-yard run on the opening drive.

Safety Tre Norwood had both interceptions for Oklahoma, becoming the first Sooners player with two in a game since 2016.

“The name of the game all night, we couldn’t get pressure on Rattler, let guys get open in the back end and and as the game wore on, we were very poor against the run,” Tech coach Matt Wells said. “We have to, sudden change like that, we’ve got to respond better, and you’ve got to come in and try to force field goals.”

Oklahoma: Really nothing unexpected for Sooners. It was the 11th time in a row that they scored at least 38 points against Texas Tech, matching the longest such streak in school history (vs. Kingfisher College from 1908-19) Oklahoma has scored at least 28 points in 58 consecutive games — the second-longest active streak is No. 2 Alabama’s 19 in a row. With No. 6 Oklahoma State and No. 16 Kansas State both losing earlier Saturday, there no Big 12 teams left without a conference loss.

“Proud of the way we played, just all three sides. A lot of good football tonight,” Riley said. “Our team keeps getting better and better. We’ve still got a long ways to go, a lot of room to climb. But we’re really improving right now.”

Texas Tech: Oklahoma had allowed only three points in the first quarter all season before the opening TD drive by the Red Raiders. Then came three turnovers, four punts and a failed fourth-down conversion attempt before halftime, and punts on their first three drives after halftime.

The two interceptions set the Sooners up at the Tech 9 and then the 25. They recovered a fumble at midfield.

“Getting the turnovers that we did were huge,” Riley said. “The couple of interceptions, the fourth-down stop, I thought defensively really created some momentum for our football team.”

After its first game back in the Top 25 following a three-week absence, the Sooners will still be ranked and could even move up a bit.

Oklahoma: home Saturday against Kansas, which has lost 15 in a row to the Sooners.