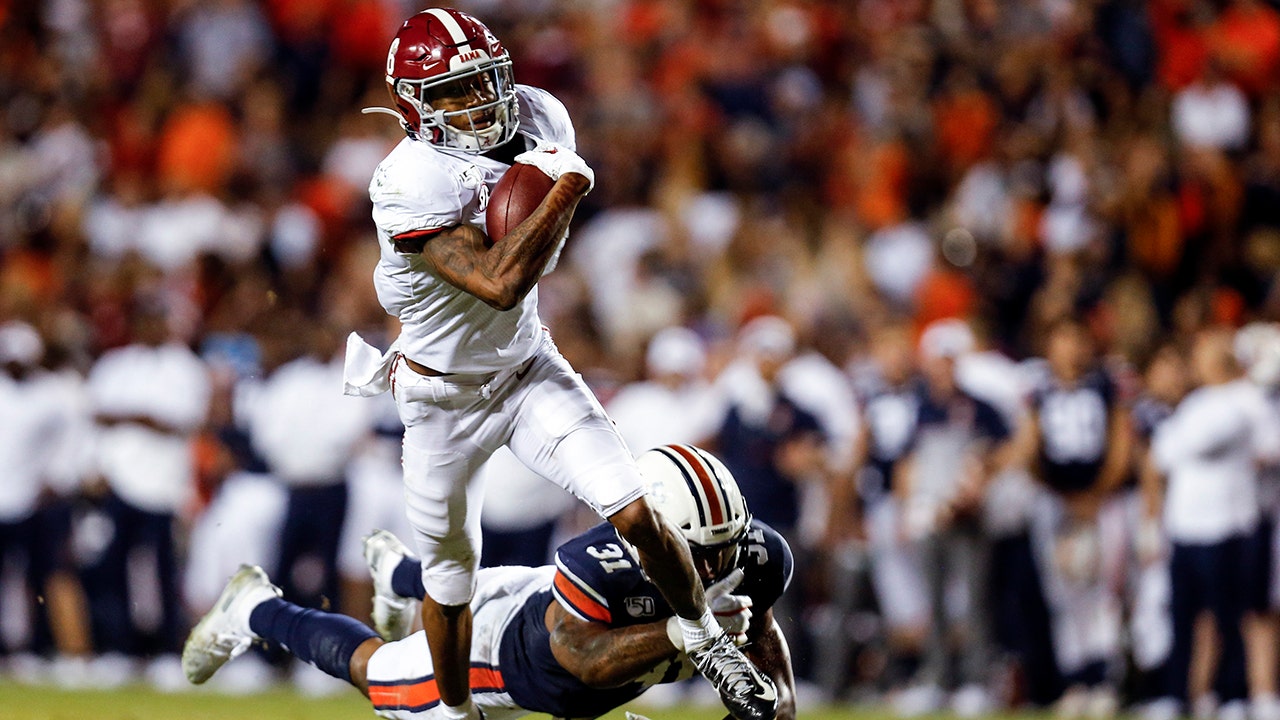 Mac Jones threw four touchdown passes to Smith and the wideout had 203 yards receiving as the second-ranked Crimson Tide began life without Jaylen Waddle with a 41-0 victory over Mississippi State on Saturday night without.

The Crimson Tide (6-0) had a dominant defensive performance, handing new Bulldogs coach Mike Leach the first shutout of his college career. It was Alabama’s first shutout since a 24-0 victory over Mississippi State on Nov. 10, 2018.

“We did a lot of research in the offseason on who played them well and who played that offense well, even at Washington State,” Tide coach Nick Saban said. They put “bits and pieces” of those approaches together and worked some on facing the offense in preseason camp, he said.

It worked well, and so did Alabama’s short-handed offense.

Smith caught first-quarter touchdowns passes of 35 and 53 yards to help send the Bulldogs (1-4) to their fourth straight loss.

Smith took over the starring receiving role in the absence of Waddle, lost to a likely season-ending ankle injury. He made 11 catches and moved into a tie with Amari Cooper for the most career receiving touchdowns with No. 31 early in the fourth.

Smith also vaulted over Jerry Jeudy and Calvin Ridley into No. 3 on Alabama’s career receiving yards list with 2,868.

“It’s just a blessing to be in this position, just to be up there with the greats that came through and set the standard for me,” said Smith, adding that he didn’t feel any pressure without Waddle.

Jones completed 24 of 31 for 291 yards before sitting out most of the fourth. Najee Harris gained 119 yards on 21 carries.

Mississippi State quarterback K.J. Costello left after appearing to take a knee to the helmet early in the second quarter. He was escorted to the locker room and replaced by Will Rogers, who was coming off a 15-of-18 performance against Texas A&M.

Leach didn’t disclose the nature of Costello’s injury. He finished 4 of 11 for just 16 yards. Rogers completed 24 of 37 passes for 147 yards and threw two interceptions.

“I thought we played hard. I thought we played sloppy and dumb at times,” Leach said. “I think that Alabama is a team that has been put together for over a decade. They have a culture that is extremely hard-working and competitive that permeates their entire program.

“We’re a program that is trying to get there.”

Mississippi State mustered only one serious scoring threat but Dylan Moses intercepted a pass in the end zone late in the third.

“We planned on doing what we needed to do to stop the Air Raid attack,” Surtain said. “I feel like carrying this momentum into the weeks ahead will give us a slight advantage.”

Mississippi State: Sputtered badly on offense out of the gate, producing 21 yards and zero first downs on its first five possessions. Outgained 337-38 in the first half, with more than half the yards coming on a 20-yard run.

Alabama: The Tide showed it still has a potentially explosive offense even without the electric Waddle. Heads into an open date as the Southeastern Conference’s last unbeaten team. Outscored the Bulldogs 103-7 over the last three meetings, including the two shutouts.

Alabama could make up some ground on No. 1 Clemson, which had to rally to beat Boston College 34-28 without quarterback Trevor Lawrence.

The game was played on Saban’s 69th birthday. “Great to win on your birthday, so I was really as happy about that present as much as any,” he said. His only other Halloween game as a head coach in college or the NFL came at Michigan State in 1998.

Waddle was still a presence in the game, even watching from the sideline.

“I think it’s always a boost for our team when Jaylen’s around,” Saban said. “He’s such a positive guy and very supportive of his teammates and really a great team guy.”